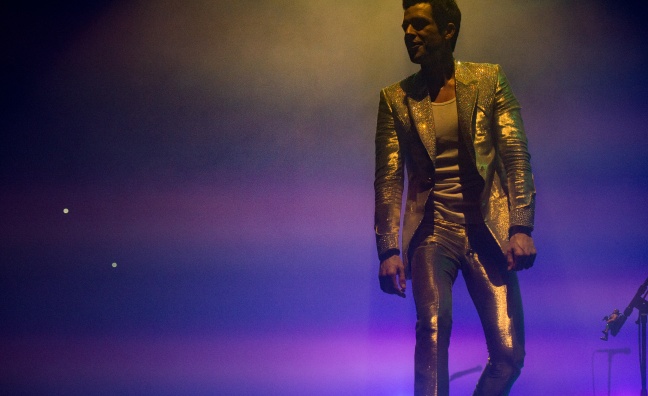 The Killers have revealed how their five-year break between studio albums was precipitated by changes to their touring line-up.

Guitarist Dave Keuning and bassist Mark Stoermer decided not to join their bandmates on the current Wonderful Wonderful world tour, although they remain part of the group. They have been replaced by Ted Sablay and Jake Blanton, respectively. Keyboardist Robbie Connolly and guitarist Taylor Milne have also been drafted in.

Fifth album Wonderful Wonderful, which hit No.1 upon its release via Virgin EMI in September, is the band's first LP since 2012's Battle Born.

“We know that Mark and Dave don't love touring as much and we tend to go on or tour for a good amount of time. It's a big commitment and so [the five-year gap] was originally to give them a lot of time," frontman Brandon Flowers told Music Week. "And in between that, I made a solo record [2015's The Desired Effect]."

He added: "Jake Blanton and Ted Sablay have been auxiliary musicians with us for a long time and then Taylor Milne grew up playing with Ronnie, so he's a familiar face, and two of the [backing singers] sang with me on my last solo tour, so we're just a big happy family right now."

"Going back and getting familiar with some of those songs was really nice," said Flowers. "Some of them we haven't played for years and it was nice to dust them off, relearn them and see how they felt.

"They all held up really well - songs like My List and This River Is Wild that we hadn't played in a long time. Why Do I Keep Counting? is another one that surprised us."

Vannucci added that no thought was given to touring Sam's Town outside Las Vegas. "That's the type of thing you think of maybe 20 years down the road," he said. "We had such a good time doing it, but it wasn't really at the top of our idea list.

"[We wanted to] keep it to two nights at a little place in Sam's Town. That was fun, but to make a bigger deal out of stuff like that is not what we're really into. There's a lot of people taking advantage of things like that, but not deserving it - and I don't want to fall into that group."