'The Mercury Prize means so much': Sun and celebrations at 2019 nominations bash 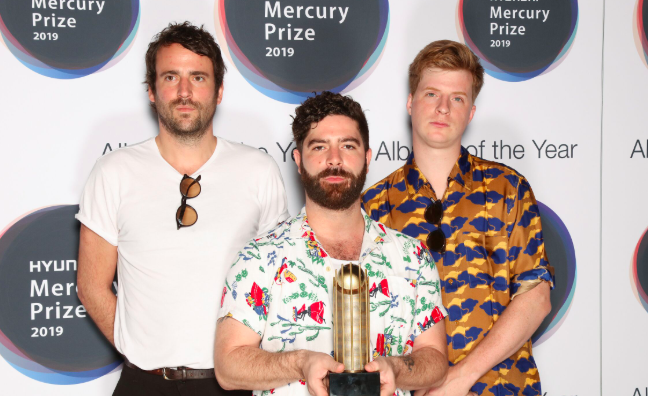 There’s nothing better on a baking hot morning than a free breakfast in a plush, air-conditioned central London hotel.

The music industry had good news today then, as the Hyundai Mercury Prize shortlist for 2019 was revealed at The Langham, just around the corner from Oxford Circus. And to go with the cheese croissants, salmon bagels and fried egg rolls was a celebration of the tireless creativity of this year’s crop of artists, from Dave, The 1975 and Foals, to Black Midi, Fontaines DC and Little Simz.

As the pack of bodies milled about waiting for Huw Stephens to take to the stage in a spotty shirt and get things going, you could see people trying to be as still as possible in attempt to soak cold air into their bones. Once the BBC new music nut was done and the big reveal was over. Warner Records president Phil Christie was heading towards the exit wearing a big smile.

“I’m absolutely delighted. I was hopeful that Foals would be nominated,” he told Music Week. “The thing they have always done is try to push their sound forward, and push forward what it means to be in a band in this era. This album is a continuation of that creative drive.”

Noting the now three-time nominees’ position on the list alongside five other bands, Christie said it’s not a case of singling out genres at the Mercurys. “I tend not to look at it in terms of genre, everyone has to stand on their own two feet regardless, making music that’s pushing things forward,” he said. “I don’t think it benefits the survival of the guitar genre by lumping things together and hoping by critical mass it will stay afloat, everyone has to drive things forward.”

Over on the red carpet, a selection the nominees began to appear. First up was Cassie Kinoshi, composer, arranger and saxophonist for London jazzers Seed Ensemble, nominated for their album Driftglass.

“I was making the record to create with people I loved, share a message and collaborate and create something,” she said. “It’s really nice to have the music and the messages within it celebrated on this level.”

Dave and Slowthai entered with presence, while first time judge Gaz Coombes – wearing an excellent hat – stopped for a long natter amidst a scrum of microphones, cables and camera gear.

“We were nominated in Supergrass for our debut album and I rememeber us at 17, 18, little lads from a village in Oxford,” said Coombes. “To get that recognition and for it to be such a big  event, it meant everything. It’s a great way to kick on and lift the confidence. When you take all that confidence and self-assuredness into your next album, it’s great.”

Joking that he’d been knocking around the industry for “75 years now”, Coombes added: “It’s a major award and is globally recognised, but you’ll find artists in there who are right at the beginning or still uncovering who they are. It’s brilliant to highlight interesting albums from any artist in any genre.”

Foals were slightly late to the party, after getting stuck on the road behind new Prime Minister Boris Johnson. Singer Yannis Philippakis didn’t seem to mind, preferring – unsurprisingly – to focus on Foals’ nomination.

“The Mercury means so much. It’s the only prize out there that values the actual art form of the album, particularly at a time when the album is under threat in certain ways,” he said.

“When we make music we think about making albums from start to finish, we spend time on the sequencing and wanting to make a complete journey,” he added. “It’s important for it to not simply be a commercial prize. It’s not just valuing who is the most successful, it delves into more esoteric records and reflects where British music is at and that’s really important, for British music, culture and the album.”

BPI boss Geoff Taylor moved around the room, surveying the warm-up bash for this year’s Mercury party. Holding forth on his plans to revamp the prize and excitedly praising the album format, he looked every inch the satisfied party planner. Look out for our full Q&A soon.

Maybe it was the heat, but there was a tangible feeling of positivity in the room today. The Mercury Prize brings the focus back to the music and there’s plenty to dig into in this year’s selection.

What does it all mean? As with every year, the debate will continue. But maybe it doesn’t need to. Just ask Anna Calvi.

“I don’t know what the Mercury Prize means to the music business,” said the Domino-signed singer. “For me it’s an incredible thing, you make this work and try to push yourself and for it to be recognised in this way is a real honour. It’s nice to be acknowledged that what you’re doing means something to someone. That’s what you do it for, really.”