"There's a lot going on!": Country superstar Kelsea Ballerini on what to expect from her next album 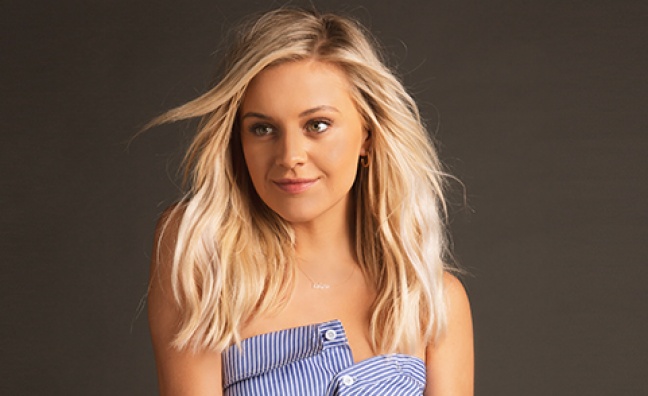 In the new edition of Music Week, we welcome country superstar Kelsea Ballerini back to our pages. Ballerini first appeared in our On The Radar section in 2017 – at the time she was riding high on the success of her debut album, The First Time, which spawned platinum, chart-topping hits like Peter Pan, Dibs and Love Me Like You Mean It.

Since then, Ballerini released her acclaimed second album, Unapologetically, in 2017 – its lead single Legends becoming her fourth No.1.

Most recently spotted in the UK wowing crowds at BBC Radio 2’s Live In Hyde Park 2019, for our latest issue Ballerini revisited the story of how she wrote Peter Pan for our Hitmakers feature, but with her new single Homecoming Queen? – not to mention its stirring video – also gaining a lot of attention, it only made sense to take some time out to find out where she’s heading next…

How was Radio 2 Live At Hyde Park for you?

Kelsea Ballerini: “It was fun. I was prepared for 20,000 people which, in my brain, is the amount of people that you can like, actually see and say, ‘This is an insane amount of people!’ Before I went on stage, they were like, ‘It's actually 47,000’ and I was like, ‘No, I can't comprehend that – can’t someone tell me that after I get off stage?’ That was only my fourth show over here so it's like I'm so new – it was a really amazing, massive way to be like, ‘Hello, I'm Kelsea, these are my songs – nice to meet you!’ It was cool because I saw pockets of people that knew my songs, but a lot of people didn't and that's the best thing ever: to be able to just introduce myself to that many people.”

The response to your new single Homecoming Queen? has been fantastic so far. Your tears at the end of the video seem to be moving a lot of people…

Kelsea Ballerini: “Yeah, it's very emo! But it was real. I worked with Shane Drake again, who did the Miss Me More video and I love working with him because he's super-collaborative. These are the first two videos that I've really had a vision for. I wanted the video to represent a peeling back of layers, from how I present myself to the world to just who I am. Shane put it in the context of walking off stage on tour to sitting alone in a black abyss. We had already done the full day of shooting and we we're doing the last shot where the camera rotates around me and I'm in a black abyss with no makeup. We did that a couple times and I was trying to emote but I'm not an actress – it's really hard for me to have a camera in front of me. It’s weird. I was trying to be over the top when Shane came over and kneeled down beside me like, ‘Hey, Kels, we totally have [the shot] so we're just gonna do one more for safety. I know you wrote this song, so why did you write it?’ and then he walked away. I just made myself go back to the place that I wrote it from, which was like just really insecure and overwhelmed...”

How close to the bone is this song for you?

“Super-close. The homecoming queen is just the metaphor we used: I was never the homecoming queen, I was whatever the opposite of that was! But Nicole [Galyon], who I wrote it with, was the homecoming queen, so we both had different perspectives on that metaphor. To me, it's just the person who seemingly always has it together and has a charmed life and all that. The reality is that nobody does, truly. I think we live in a world right now where we all feel like we have to be filtered, perfect and happy all the time... And it's unrealistic. It leads to a lot of anxiety. I just wanted to honestly give myself the permission to be like, ‘You're allowed to have a bad day, feel insecure, grow and push through that, and then have a good day.’ It was a song about giving myself permission to feel however I feel.”

How have you grown as a songwriter since your second album?

You’ve already written a lot of hits. What do you think it is about say, songs like Peter Pan and Legends, that have connected with people?

“I don't really know what makes a hit. I think I'm still trying to figure that out. But what I do know is if I write as now, a 26 year old, stuff that is genuine to me – whether it's about a breakup or falling in love, or family issues, or being insecure or any of that – if I write that true to the bone, it's going to click with people. Those are all universal feelings and thoughts that we all go through. I think especially in country music, that's what makes a hit a hit. It’s just something that is relatable, honest and transparent, even if it's fun and quirky and all that. So that's what I do now.”

So what can we expect from your next album?

Will we hear it this year or next?

And how many songs do you have in the bag so far?

“Ten songs. The first 10 songs are the ones that are singles or that feel mainstream and good for radio. I want to get those all mixed and mastered and then be like, ‘OK, I want to do a weird song and a song that is going to crush live but will never be a radio single. I can play with the rest of it!”

What is it that you want to experiment with in particular?

“So far on this record, there's just a lot going on. I mean, Homecoming Queen?’s a tell of that, there's a lot more country. There's also a lot more country pop. We have a song with horns, we have a song with a string quartet. We have two collaborations. Unapologetically was a concept record – top to bottom, if you listened to it, it told a story. This is opposite of that. It’s quite liberating – this one's just like, ‘Here you go, try and figure this out!’”