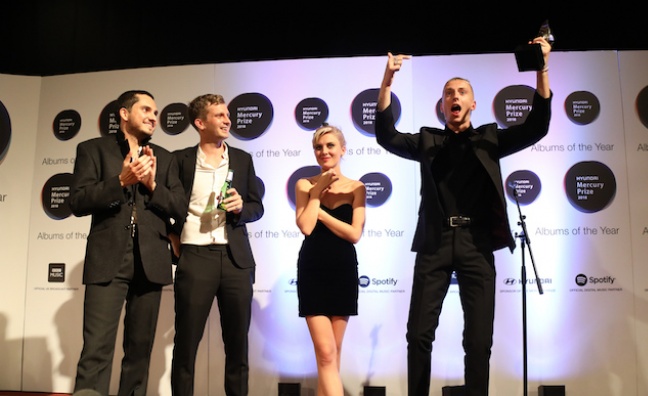 Wolf Alice are already enjoying a sales boost for their Mercury Prize-winning album, Visions Of A Life, which is riding high on iTunes. With 57,866 sales to date, according to the Official Charts Company, the band’s sophomore album is set for lift-off following its victory on Thursday (September 20) - we’ll find out later today (September 24) how it fares in the Midweek charts, along with their Mercury-nominated debut My Love Is Cool and Don’t Delete The Kisses, which the band performed during the ceremony.

In the latest issue of Music Week we talk to team Wolf Alice - including the band and Dirty Hit founder Jamie Oborne - about their Mercury victory. Here, East City Management’s founder, Stephen Taverner, outlines the ambitions for the indie rockers following their triumph…

How can Wolf Alice build on the success of Visions Of A Life so far with this win?

“The first place I need to go is into the record company and say,  ‘We need to up the budget’. Now on the back of this, you need to reinforce it - that will be a big priority like we did with Alt-j when they won it [in 2012]."

Are you expecting a significant sales boost?

“Yeah, it’s definitely got a chance to do that. There’s a lot of work to do, it’s not just a case that you win it and then it’s instant, not every time anyway. Hopefully this is going to do us a lot of good.”

The campaign launched well over a year ago, does this mean that will be extended?

“The touring is wrapping up at the end of the year. I just said to Jamie from Dirty Hit that we need to think about what we’re going to do, we need to put something out and make sure we get behind the win.”

Visions Of A Life was widely acclaimed as a body of work upon release, were you glad to see it recognised by the Mercury judges?

“Yeah, it needs to be listened to as an album as well, it would be very important for people to get the whole picture. It’s intelligent, it’s totally deserving as a record to win this prize. I never had any idea [it would win], I don’t think anyone can. When it’s being judged in that side room, it’s difficult to know what they’re thinking.”

The band celebrated in style too…

“Yeah, they are just absolutely incredible. They have been on the road non-stop for what feels like five years, it probably feels like 10 years to them. Yeah, it’s a testament to the band really.”

Will the win help the band internationally?

“The US is building, it’s getting there, hopefully there will be a ripple effect there. We’ve got a bit of work to do in Europe but this will definitely help.”

Dirty Hit are obviously very supportive on the label side, how’s the band’s publishing business?

“They re-signed with Kobalt because they just love the experience, they’ve got a great relationship.”

Does this Mercury result signal a rock revival?

“I think we need a song revival. And those songs can come in many shapes and sizes. This album shows they are amazing songwriters, which is why I think it has got legs as well. They will go a long way writing songs like that. They’re also experimenting all the time as well, which is great.”

With two consecutive nominations and now a Mercury win, are you confident they can become a band with a long career?

Are there any plans yet for the third record?

“They are always writing but nothing yet.”

To read Music Week’s 2017 feature with Wolf Alice on Visions Of A Life click here. For our 2018 Mercury Prize highlights click here.