'They have such a dedicated following': Anton Corbijn praises Depeche Mode fans ahead of new film 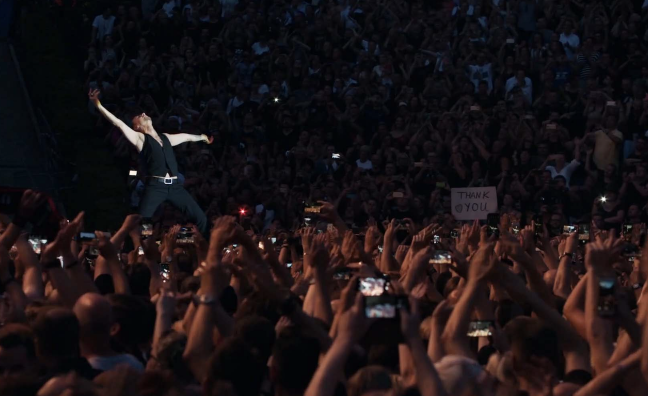 Anton Corbijn has told Music Week that Depeche Mode have “a very big footprint” as their new film collaboration Spirits In The Forest is released.

The film is the third the Dutch photographer and director has made for the band, following 1993’s Devotional and Depeche Mode Live In Berlin from 2014. It is showing in cinemas around the world for one night only this week (Thursday 21).

Corbijn originally came to the UK to take photos for NME and first worked with Depeche Mode in 1986 on the music video for A Question Of Time, from the Black Celebration album.

He told Music Week their collaborations led people to “perceive the band differently”.

“These things you don’t plan for, they grow organically and then they just work,” said Corbijn. “It’s beautiful, I love them very much. I like to think that we get on well.”

Spirits In The Forest will screen in 2,400 cinemas in more than 70 countries. Blending documentary and live, it features footage from the Global Spirit tour of 2017/18 while examining the lives of six Depeche Mode fans.

Corbijn said it illustrates the impact the band have made since forming in 1980.

“I designed the stages for the tour, so I wanted a document of it. We tried to find a different way to make a live film and we found this idea with the fans,” said the director.

“Depeche Mode have a very big footprint, they’re a very big band. Most people don’t realise how big. They have such a dedicated following, it’s rare,” he added.

The plan to tell the fans’ stories used Facebook, where Depeche Mode’s official page has more than seven million likes.

“Every day at the start of the tour, they invited a fan to be in charge of their Facebook page, in order to be nominated for that you had to write to the band to say why you felt you deserved it,” said Corbijn. “So thousands of fans wrote to Depeche with their stories and they had this whole archive of people. We found six diverse stories in different places and different cultures, that’s how we selected them.”

Corbijn is currently putting the finishing touches to a new Depeche Mode book and is also working on a film with U2. Read an interview with the director in the November 25 issue of Music Week.