"This band opened our eyes": How Blink-182 and All Time Low united for new BMG project Simple Creatures 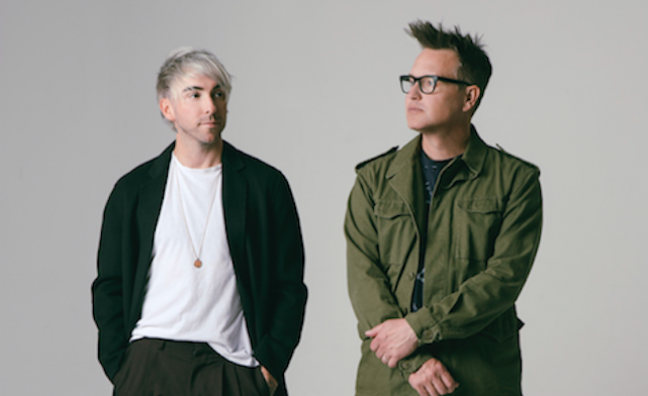 Both All Time Low and Blink are two of only relatively few rock bands to have secured No.1 albums on the UK charts in recent years – with 2015’s Future Hearts and 2016’s California respectively. The question, then, of what happens when the two join forces is a compelling one – something Dan Gill, GM, frontline division US, at BMG said meant that the label were “all in” on based only on the concept alone.

Last Friday (March 29), Simple Creatures released their debut EP Strange Love – the first of two set to be released. In our feature the duo explain how the project came to life following some “post-tour depression” on Hoppus’ part resulting in a need to get back in the studio to make new music, while their team at BMG and Cardiff Giant management explain how they’re making sure the project connects.

Today (April 3), Simple Creatures play their first ever live show in the UK, with a performance at London’s Hangar, while in June, they will return to headline a stage at Download Festival.

“Headlining a stage at night for the first time could be a huge moment for the band,” Blink manager Gus Brandt of Cardiff Giant told Music Week. “It’s the largest crowd they’ll play to on a very diverse bill, and I hope it is a really big moment for them.”

Here, in an unread portion of our interview, Hoppus and Gaskarth take us further inside the world of Simple Creatures…

The album emerges from some post-tour depression on your part, Mark. How come you decided to do a band and not a solo album?
Mark Hoppus: “In the studio I definitely do better when I have someone who’s kind of a creative foil to me: someone you can bounce ideas off and collaborate with. If I’m left totally to my own devices, I think I do some of my worst work. I always think that other people help my ideas more than. It just works better for me that way and Alex is the perfect person for that.”

You first meet Alex when All Time Low ask you to collaborate on a song about 10 years ago – what was your impression of them?
Hoppus: “I’d known about them for a few years before I actually met Alex, I thought they were a cool band. Alex and I got along right from the beginning, we all did actually. So, when I wanted to write music [for what would become Simple Creatures], the original idea was that I was going to write music with a bunch of different people I’ve met over the years who you kind of say, ‘Oh yeah, we should get in the studio at some point’ to. It’s usually just something you say, but I was actually going to take people up on their offers!”

Alex, you said you idolised Mark growing up. What was your first impression of him?
Alex Gaskarth: “He’s everything you perceive him to be. At least back then I was like, ‘This dude’s seven feet tall!’. He’s not, but that’s how it felt at the time. I was nervous and intimidated so I just wasn’t on that wavelength. I’m pretty sure I was a nervous wreck the whole time for the first time we met, but I will say we wrote a pretty cool song together and from there it sort of turned into this budding friendship. I think I needed to do some growing up before we could really relate but I think it was enough to keep me on his radar for a little while. It was years down the line when we started crossing paths again – when Blink reformed and our band started doing some shows together at some festivals.”

And what about you Mark – what did you make of Alex back then?
Hoppus: “Even when he met me for the first time it was obvious that he had grown up listening to Blink and he had said that I was a huge influence on him which is a giant compliment, but he wasn’t a pushover even then. He stands up for his band and he stands up for the music as he thinks it should be so he’s never been deferential at all.”

You said the first Simple Creatures song you made together wasn’t up to scratch because you were both being too “polite”. How did you get around that?
Hoppus: “Writing songs with people you’ve never written songs with before is kind of like going on a blind date. I’ve been on lots of sessions where it didn’t work out very well or the vibe just wasn’t there. Sometimes magic happens and sometimes it doesn’t – you just kind of roll with the punches. Aside from the first song that we did, I think everything started flowing really well. We write songs very well together, he’s a great creative foil AND he’s not afraid to stand up and say, ‘I don’t think this idea is the best’ or, ‘Let’s lose this part entirely and write a new chorus’ or whatever it is.”

Simple Creatures is very different musically to your work in Blink-182 and All Time Low. Did you learn anything about yourself as songwriters in the process of making the EP?
Hoppus: “I think that I will always be tied to a strong sense of melody and a good hook but I am a lot more excited now. I feel like I’ve been, not trapped, but I feel like I am reliant on a specific type of distorted guitar, a specific sounding bass, a specific set of tools and doing Simple Creatures really opened my eyes to everything you can do with technology right now, combining traditional recording techniques and ethos with modern techniques like not being precious about where our sound comes from or how it gets processed. If it sounds cool use it.”

Gaskarth: “That was the most pleasant surprise. Once we got on the creative path that we knew we wanted to be on, we set rules for ourselves of not sounding like anything we do in our day jobs. Then it really started coming together naturally. Zakk Cervini, our producer, had a big part in that as well. Once we discussed our parameters he was really good with making suggestions and setting guidelines and tailoring the sound with us to make it something unique. We’ve professionally taken to calling it trash pop – but it’s a fun trash, a good trash. There’s a lot of pop sensibility to the writing and it falls more into that alt-indie pop world. I don’t think it’s really coming from a rock place because to me a rock band is four guys in a room with a drum and bass and the fact of the matter is we don’t have a drummer! It’s like we’re creating something that falls into a new category for us: pop sensibilities with a modern, electronic approach to writing music but then it’s still very gritty and it’s messy and grimy and rough around the edges.”

You kept the project underwraps until launching your first single. Are you pleased with the reaction so far from fans?
Gaskarth: “I was very pleased given what this project is and how precious both our bands are to people, and how precious people can be about music. There’s a lot of people that don’t always want something new or something different, people don’t always like the shake up so I thought that it was a really cool. Everybody I played it for and everybody that I’ve gotten to talk to about it was like, ‘This is the most pleasant surprise that I had no idea I needed or wanted’. That’s been a perfect way to surmise what this whole thing was. Not really giving anyone any forewarning and then putting out this thing that was really different was the way to do it. If we had hyped it up or let people’s imagination run wild then we would’ve been in a complicated situation when the music came out and it didn’t sound like what people might have expected. The reception’s been incredible. One of the most exciting things right now is we put a bunch of shows on sale and they sold out within minutes. It’s incredible, it’s tangible now – getting to play these songs in front of people is making it official.”

Mark, you’ve spoken about how part of the appeal of Simple Creatures is being able to just release songs/EPs whenever you want, which is still relatively rare for rock bands. What impact does that have on your thoughts on the album as a whole?
Hoppus: “I totally think that albums have a place. For Blink especially, we try and write an album to be listened to all the way through and not have it be a collection of songs. Although we know that people will consume it however they wish, if somebody wants to sit down, put on a pair of headphones and spend 45 minutes listening to a Blink album we spend a lot of time figuring out how songs flow into one another and making sure that there’s not too many songs with a similar feel, key or tempo right next to one another – we want the whole thing to have a flow like you’re watching a movie where there are peaks and valleys and it takes you on a journey.”