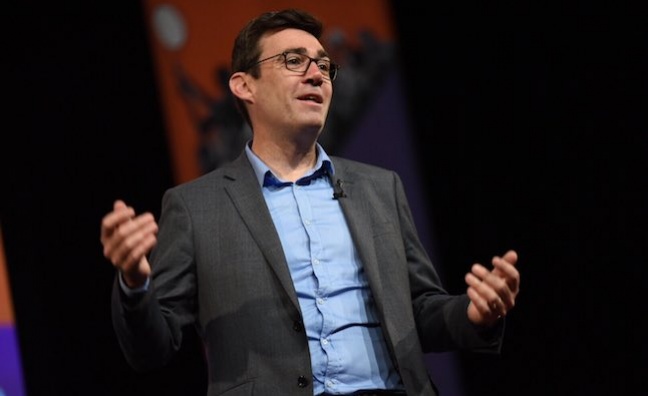 Figures released as part of UK Music’s review into music in Greater Manchester show the value of the city-region’s music scene to the UK economy.

The report made 10 key recommendations for Greater Manchester to grow and strengthen its music sector. These have been informed by extensive consultation and public surveys.

The recommendations include setting up a new Music Board; establishing a Talent Pipeline Fund and Global Music city-region; protecting grassroots venues through Agent Of Change; and incentivising businesses with discounted rates.

There are further recommendations to coordinate music education services, provide opportunities for emerging artists and inclusive networking, integrating transport and reaching out to all parts of the city-region.

Mayor of Greater Manchester, Andy Burnham, said: “We need to recognise that the music industry has changed since 1989. It is quite a lot harder now than it was then for new talent to get noticed and to break through. Gone are the days of watching Granada Reports on a Friday evening and hearing Tony Wilson, having finished reading the headlines, say: ‘And, to play us out, here’s Northside ...’

“We need to find new ways of doing the same and giving today’s Mancunian talent a stage and a spotlight in which to shine. It was this impulse which led me to ask UK Music to undertake an independent review of our music scene across Greater Manchester. It was time to take an honest look at ourselves. This review has helped us to understand our strengths, what works well for our artists and audiences; but also to be aware of our weaknesses and what more we can do to stay ahead of the game and make Greater Manchester an even better place to make and enjoy music.”

UK Music CEO, Michael Dugher, said: “No one knows better than Andy Burnham just how critical music is to the economy and the cultural fabric of Greater Manchester. Greater Manchester is known throughout the world for its rich music heritage, but this UK Music report, which reveals music generates £169 million for the local economy, is all about the future. It’s about how we build on that proud past and how we can use music as a tool to help grow the city region economy, create more jobs and attract investment and visitors here.

He added: “Our objective is to grow the region’s diverse music scene and boost the talent pipeline by protecting grassroots venues, improving transport links to boost the night time economy, expanding the number of rehearsal spaces and increasing opportunities for young people from every background to access music and to forge a career in music. We look forward to continuing to work with Andy on the next steps to ensure Greater Manchester position as a global music city region is fully realised.”

Greater Manchester Combined Authority will now work with UK Music and the industry to take forward the recommendations.