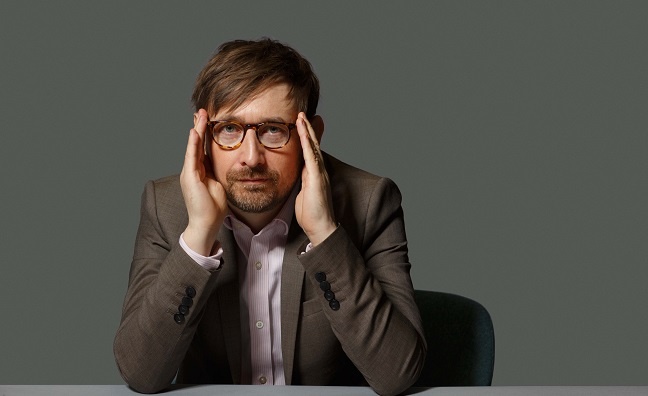 The record, which tackles themes including technology and the workplace, is the band’s highest-charting studio LP in a career lasting almost three decades. It peaked at No.5 and has sales so far of 15,190, according to the Official Charts Company.

Office Politics is your highest-charting album. Why do you think the LP format still endures?

“It’s just the right length. People were saying that the idea of the movie was going to disappear because TV was having such a renaissance, but it won’t because the movie is just a good length and the right sort of form for people to get really stuck into, but not have to give over the rest of their lives to it. Albums are similar to that. I’ve just made a super long one, and I was listening to it with my Mum and I was thinking, ‘My God, this is going on forever’. Credit to her, though, she didn’t get bored. On the whole, your 11, 12, or 13-track record is about as much as people can bite off in one sitting.”

What is it that makes a record The Divine Comedy, and not a Neil Hannon project?

“It’s a completely arbitrary rule between myself and my manager Natalie [De Pace]. We decided maybe a decade ago that I’d stick with The Divine Comedy for my pop records. I was starting to do extracurricular commissions and I thought I would just use my name for those. It seemed like a nice handy way of defining the two from each other. There’s no reason I called my records The Divine Comedy, apart from the fact that I like the name and it seems a reasonable summation of what I am trying to achieve.”

What’s your relationship with technology?

“I don’t want to sound like an old fuddy-duddy, I’m only 48, I shouldn’t be so begrudging about modernity. But to my mind, most of it seems unnecessary and almost a complication, instead of something that’s meant to make our lives easier. I haven’t got a great relationship with it myself, things tend to break the moment I touch them. I came very late to computers. All my contemporaries at school, I think they were all in secret computer classes that nobody invited me to, I don’t know. When I got married, I was taught me how to use computers.”

How do you feel about artists today showing their personality on social media?

“I think it has the opposite effect – it often almost dilutes their personality. We met a kid the other day who’s got a band and they are doing reasonably well, but I noticed that he was on his phone constantly. I was going, ‘Oh my God, young people today on their phones all the time’. And he said, ‘It’s my job. I’m the person who does the social media for the band and they just want something every two or three hours from me.’ That’s not the role of a musician, that’s not the job as far as I’m concerned. It would be much better if he was enjoying life, experiencing the world and having something to write songs about.”

Did writing the Father Ted theme and the show’s mock Eurovision song My Lovely Horse change your life?

“It’s been nothing but useful. I’m really not one of these sort of people that denies their past or biggest hit because they are fed up with them. Father Ted was a remarkable stroke of luck. It was at exactly the right time. I did it at the same time that I was making Casanova and there’s nothing the media like more than an angle, a reason to talk to this person. It was great for that. The show miraculously became a cult classic. So people kind of associate it with me, happily, even though I have nothing to do with the lighting or the acting. I just wrote some music for it.

“So I’m very lucky to be involved, and it also means I’m involved in the musical which we are concocting at the moment. We’ve got a producer on board, the script and the songs are done more or less, it just needs an awful lot of practice and maybe a theatre. I’m doing most of the music. There’s a chap called Paul Woodfull who’s doing some of it, and Graham [Linehan] and Arthur [Mathews] who wrote the original series are pretty much the brains and the creativity behind the whole story and script.”

Do you think it’s got the potential to be a hit?

“I think it will be a huge success, he said, hoping it will be a self-fulfilling prophecy. You can’t tell with these things. I think we should have it out next year, but I think we said that last year, so I don’t know. We are certainly aiming for a big West End show.”

To read the Hitmakers feature on The Divine Comedy’s National Express, subscribers can click here.