'We won a Mercury, this is mad!': Post-prize sales surge for Wolf Alice 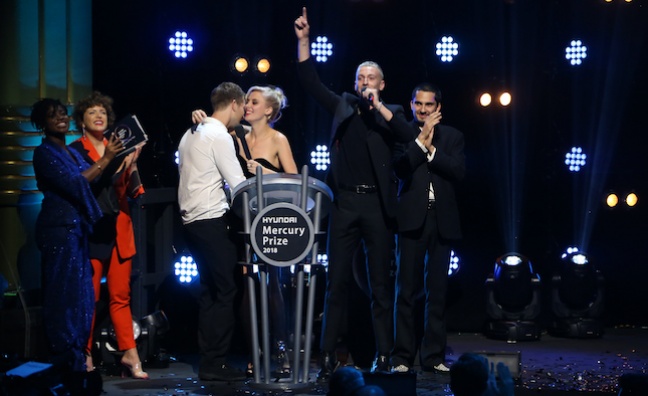 The prospects of a significant Hyundai Mercury Prize impact are looking good for Wolf Alice, who are pushing for an iTunes No.1 following their victory.

The band’s sophomore album Visions Of A Life is currently at No.2 on iTunes behind Chris, the comeback from Christine And The Queens. The album was first released a year ago and peaked at No.2; current sales stand at 57,214 (OCC).

Stephen Taverner, founder, East City Management, said the album has “definitely got a chance” of securing a major sales boost.

“There’s a lot of work to do, it’s not just a case that you win it and then it’s instant, not every time anyway,” he told Music Week. “Hopefully, this is going to do us a lot of good.”

Don’t Delete The Kisses, which the band performed for a second time at the ceremony after their win, is currently at No.37 on iTunes. Ahead of the ceremony, singer Ellie Rowsell said it was an “uplifting” selection from their sophomore album.

There’s a lot of work to do, it’s not just a case that you win it and then it’s instant

Following his outspoken acceptance speech about the labels who turned the band down, at the winner's press conference bassist Theo Ellis said it was an unplanned reaction.

“I almost instantly regretted those words - I think I told a lot of labels that never signed us to fuck off,” he said. “But you can still fuck off! We won a Mercury, this is mad. I’m going to have so many Jagerbombs in a minute.”

“I now know what overwhelmed feels like, I’m so overwhelmed - but it feels good,” said Rowsell.

Jamie Oborne, founder, Dirty Hit, said: “I’m really happy for the band and for Ellie. When we found out we’d won, her reaction was so pure that it really warmed my heart. It was a good moment.”