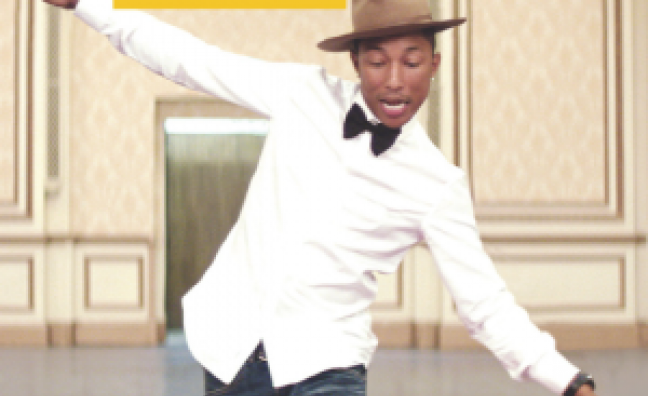 It’s a Williams double whammy at the top of the charts this week, with Robbie of that ilk continuing to dominate the album rankings, while Pharrell registers his first solo number one single, with latest hit Happy advancing 2-1 on sales of 106,904 copies.

Williams’ Happy ending caps a great year for the singer/rapper/producer/songwriter who also co-wrote and sang on the year’s two biggest hits – Blurred Lines (Robin Thicke feat. T.I. & Pharrell) and Get Lucky (Daft Punk feat. Pharrell Williams) – which spent five and four weeks at number one respectively, while selling 1,472,681 and 1,308,007 copies.

Looking up rather than down, we should say that those 5,696,413 sales were a giddy all-time high for singles, and in historic terms last week’s tally was still one of the highest ever.

Robbie Williams’ Swings Both Ways tops the artist album chart for the third time in a row, and the fourth time in six weeks, selling a further 90,938 copies.

Gary Barlow’s solo excursion Since I Saw You Last also remains much in demand, and rises 3-2 on sales of 78,729 copies. The two are the first bandmates in chart history to occupy the top two positions simultaneously with solo releases.

After two weeks at number five, Beyonce’s eponymous fifth solo album reaches a new peak, climbing to number four. Its sales remain remarkable stable – it sold 67,858 in two days on digital alone following its surprise release a little over a fortnight ago; 67,856 (two fewer) the following week, with CD sales kicking in; and 67,463 (a further drop of 393) last week.

With her latest single, How Long Will I Love You, showing unusual stamina for a Children In Need release – it holds at number seven on its seventh week in the Top 10 – Ellie Goulding’s second album Halcyon continues its recent rally, and holds at number six on sales of 61,278 copies. In the chart continuously since its release 64 weeks ago, with a high of number two on its debut week and a low of number 61 just eight weeks later, it was – like Olly Murs album – relaunched in an expanded edition during 2013. Its sales last week were almost twice the 33,425 copies it sold on its debut, and the second highest of its career, trailing only the 64,208 copies it sold the week before last. Overall sales of Halcyon now total 627,186 – putting it on track to eclipse Goulding’s chart-topping 2010 debut Lights, which has a to-date tally of 738,752.

The only new album to make its Top 200 debut is Justin Bieber’s Journals. Released only in digital form, it contains all 10 of the singles which Bieber charted in consecutive weeks between October and December in his Music Mondays series of releases, and five new songs. Debuting at number 46, it sold 11,247 copies last week.