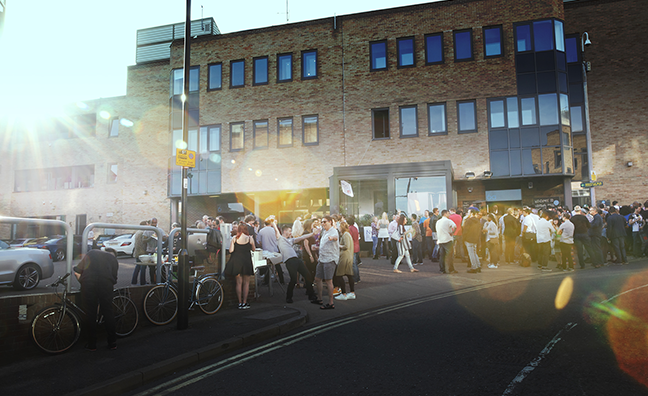 Over the decades it has become common for seemingly insalubrious areas of London to rocket up the indices of respectability and credibility as they attract shiny new businesses and preposterous new property prices.
But King’s Cross? Who signed that off? True, it is wedged between rock’n’roll Camden and chi-chi Islington.

But still: King’s Cross?A couple of decades ago, it really did not show much promise – just an awful lot of threat. It was associated with drugs, prostitution and a dirty great railway terminus. Not necessarily in that order.Now though, thanks to one of Europe’s biggest-ever urban regeneration programmes, it is very much the place to be – and to work, and to live, and to eat, and to drink.

It is already home to PRS For Music (along with the MPA and BASCA) and Central Saint Martins art college, and will soon(ish) welcome Google and Universal Music.Most either are, or will be, in the ‘official’ regeneration site, occupying 62 acres north of the station.

This is the mapped, planned and paid for renewal project. Keep going, however, past The Guardian’s offices, past the swanky new ‘living spaces’, and just when you think maybe the cool kids haven’t ventured this far, that the terrain is maybe slightly too rough for micro-scooters, you hit Tileyard Studios – the most vibrant creative hub in the entire postcode, an expanding cluster of musicians, producers and writers as well as a myriad of music businesses including labels, publishers and management companies.

This is part of the organic commercial and creative swell around the central surge. And it’s attracting more occupiers and interest with every passing month.Two members of the team helming the development (and the associated Tileyard Music management and publishing company) were originally in a ‘90s boy band called Ultra.

Michael Harwood (guitar) and Nick Keynes (bass), enjoyed some success in this spotlight (they sold nearly half a million albums), but ended up getting dropped (twice, in fact) and having to work out how they could stay in the business and continue to be creative, one or two steps behind the frontline of stardom.

Together with ex-bandmate and former business partner Jon O’Mahony they ended up creating a company called Goldust, writing and producing for a host of pop artists in the early 2000s including Natasha Bedingfield, Liberty X and Kylie, as well as branching out into soundtrack work.

Keynes recalls: “We were working out of our homes and really needed to take the next step, but everything we looked at was either really ropey or really over-priced. So we thought we’d be better off building something ourselves.

“We bought a building in West London and created six studios: we took the top three and rented the bottom three out to help balance the books. And what happened was we inadvertently created this mini-hub, which was really the catalyst for Tileyard. It was a warm-up for Tileyard.”The other catalyst was their friendship with a property developer called Paul Kempe, who ended up investing in their business.

Keynes stresses that, although Kempe comes from a property background, he has always had a huge passion for music and the creative arts and that perhaps the two bonded because, “I’m reasonably entrepreneurial, for a creative guy – probably because I’m not such a natural creative as Michael, so I sit there thinking, I need to bring something else to the table and try to come up with a new angle”.

Kempe owned some land north of King’s Cross. And when Keynes and Harwood needed a decent sized space to host an A&R event that couldn’t be accommodated at their West London HQ, he suggested they come up and have a look.“At that time it was deserted,” recalls Harwood. “There was some manufacturing, some storage, no theme, certainly no creatives.

It was pretty unsexy.”But, it offered a space that suited, it was relatively cheap – and it worked.“We ran a few of those events, and the cogs started turning for all of us. We were happy out west [Acton, to be precise], the industry was out that way, but we thought here was an opportunity to start afresh, to build a community around ourselves.”“I also think it was a time when the industry was becoming less closed off, moving away from working in silos with the majors as the gatekeepers.

”So, in January 2011, they moved in and, in partnership with Kempe, who had agreed to commit significant investment to the project, took control of the complex. “We started calling people up, getting them to take a look. There was a lot of, Errr, okaaayyy… But, over the course of about six months, we got four people to commit to studio space, one of whom was [songwriter] Wayne Hector, which was quite a coup at the time.”The site grew rapidly, soon expanding to include businesses as well as writers and producers.

“We knew we needed access to the industry,” explains Keynes. “Create an inner circle of creative talent, with ancillary industries round the outside. When that started to come together, we knew we were onto something.”“The two companies key to making that happen were Sound Advice and JHO Management,”

Harwood points out.“We brought Jho Oakley and Robert Horsfall up here, they took one look and said, Yep, we love it. Jho said, I totally get it, this could be the next Brill Building,” says Keynes. “I remember saying to Paul at the time, this could be the game-changer.

We’re all forever grateful to Robert and Jho, for that belief and vision.”Keynes says that another key reason Tileyard works for artists and creative businesses is because of an inherent understanding that their workspace isn’t just a space in which they work – it’s integral to what they do and shapes how they do it. “What we don’t do is build a space and try and fill it. Never.

We work with clients, we get to know them and understand their requirements. With studios, that’s absolutely essential, but we take the same approach to offices as well: What do you need? We’ll make it happen.”Tileyard has now grown to 73 studios and over 75 business clients. It covers 105,000 square feet and welcomes around 800 people every working day.

Sixty per cent of the businesses are directly concerned with music (from management and publishing, to live agents and vinyl manufacturing), others are involved in fashion, film, digital marketing.“It’s become more of a campus,” says Keynes, “with a shared ethos and culture spread amongst a quite eclectic mix of companies. And everything’s on hand, from great drummers to amazing social media agencies.

Tileyard’s the fourth major! We – as an entity – can genuinely do anything a record company can do, from writing and recording to manufacturing and marketing – and write the contracts!”Harwood continues: “Whatever you do, you don’t really have to leave here.

I think we’re harking back to the business as it was in the ‘50s or ‘60s, working as a cottage industry, doing things for yourself, but also in collaboration with like-minded people.“You go into the café or to an evening event, and you’ll bump into someone who is going to be either interesting or useful to you, or more likely both.”The key now is to expand without compromising the culture on which Tileyard is built.

There is constant additional investment being made to continually improve the complex, as well as acquiring further buildings to satisfy the ever-increasing demand for space at Tileyard. Keynes says: “Within the next five years, we’d like 2,000-3,000 or so people here, maybe across as much as half a million square feet.

But the mix of companies will be curated in exactly the same way and everything we build will be built specifically for, and in conjunction with, individual clients.”Another key area of expansion is education. There are already plans to run everything from day courses to degree courses – all on site.

“We want to help find and teach the industry’s next artists, producers, managers, designers and publishers here,” adds Keynes. “We’ve looked at what’s out there and in some cases we didn’t think it was especially relevant to the music industry today, so we really want to make education part of the mix.”