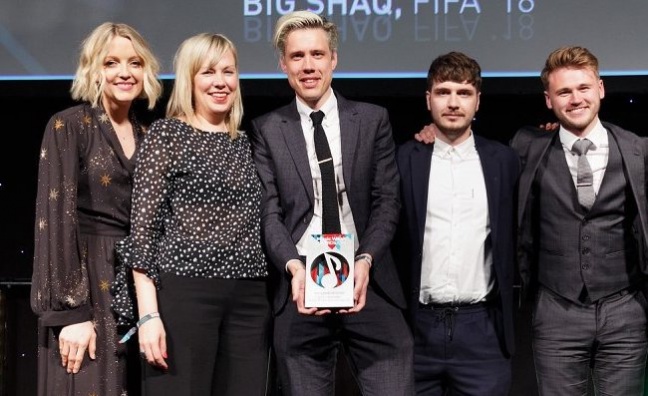 Adam Bulleid has exited Universal Music UK to become an agent at WME in the brand partnerships division.

Bulleid was previously VP, business development - brand partnerships at Universal Music’s Globe division. He has been recognised at the Music Week Awards, including winning in 2018 (pictured with trophy) for a Biq Shaq/FIFA 18 campaign.

In his new role, UK-based Bulleid will work across WME’s music and talent roster.

Bulleid began his career at NME. He spent more than seven years at Universal Music Group working predominantly across the UK roster for brand partnerships, sync and music integrations. One eye-catching partnership with Samsung involved a vertical gig by Mabel configured for filming on phones.

During his time at UMG, many of the artists he represented at the label were shared WME clients.

Other new appointments in the brand partnerships team include Carolyn Massey and Bernard Tyler.

Massey is joining WME after four years at ICM Partners where she rose through the ranks in the agency's global branded entertainment division. During her time at ICM she worked with clients such as Migos, Quavo, Khalid, Lil Yachty, J Cole, Ari Lennox, J.I.D and Earthgang, among others.

Before joining WME, Tyler served as executive, brand consulting, at CAA Sports, where his work consulting brands on their sports and entertainment partnerships included EA Sports, Canada Goose, Pizza Hut and Tissot. Tyler most recently led an EA Sports FIFA North America initiative with Adidas to launch a limited custom shoe with the release of the game.