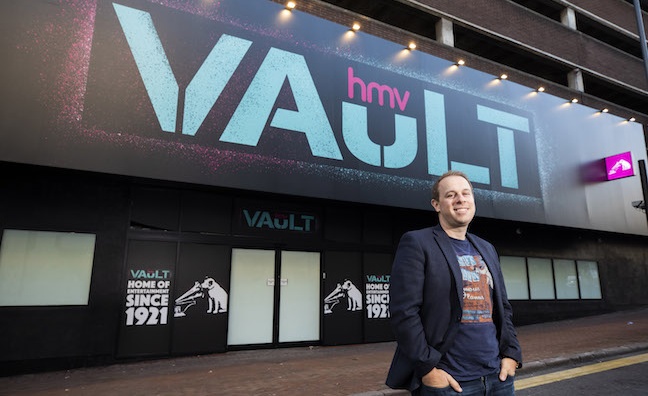 The much-loved retail chain went into administration over Christmas 2018 and looked doomed – until it was rescued by Doug Putman’s Sunrise Records, which stepped in and kept 100 shops open. A vinyl-heavy reboot, a new Birmingham superstore (pictured: Putman outside the new store) and much acclaim from the industry followed.

So there was more consternation a year after HMV’s initial problems, when the chain announced plans earlier this month to close 10 stores unless landlords allowed them to renegotiate rents.

So does that mean the chain is in more trouble? Well, despite a tough Q4 for physical albums – although vinyl album sales surged 7.7%, according to the BPI – the UK’s leading commercial executives don’t think so.

No one wants to see fewer stores selling music, but bosses at the three major labels see HMV’s proposed action as the sort of prudent portfolio management that the old HMV avoided at all costs, even though it was ultimately the drag from unprofitable shops, including the flagship store on London’s Oxford Street, that plunged the business into trouble in the first place.

“The issue with the previous owners was that there were too many unprofitable stores sucking cash out of the business when other outlets were profitable,” David Hawkes, MD of Universal Music UK’s Commercial Division, told Music Week. “We would encourage HMV to run a profitable business. If there are stores out there that drag down profitability and could suck cash out of the business, we would proactively encourage them to close those unprofitable stores down. Is it a worry? No, because I would hope that there is a decent proportion of stores out there that HMV are currently active with that can deliver ongoing profitability for them. Which is good for them and very good for the industry as a whole.”

Hawkes cited high rents and business rates as potential threats to all bricks-and-mortar shops but stressed he was “not overly concerned” about HMV after a very promising Christmas for sales in the chain. And over at Sony Music UK, Charles Wood, VP of market planning and media, agreed.

“I suspect it’s prudent management now they’ve had a decent amount of time to take stock of the stores they had,” Wood told Music Week. “It’s never good to see any shops disappear but I don’t think it’s indicative of a wider problem.”

“The way that Doug has repositioned the business more towards vinyl has definitely helped them because their vinyl sales have actually grown year-on-year,” he told Music Week. “There’s clearly still a space for physical and that’s very healthy for us as a business, because you need that revenue mix.

“Doug’s managing his business very well, he’s doing the right thing in reassessing the store base and making sure he’s down to a core of stores which actually make money,” Breeden added. “Opening The Vault in Birmingham was a great move, the ambition for him there is to create a destination venue particularly for people who are vinyl collectors, it’s somewhere they go for the day. That’s good portfolio management.”

And, as shoppers in 10 locations wait to find out if they will still have a local HMV store next month, Hawkes said some reduction in shop numbers was inevitable with a highly-challenged High Street environment for all traders.

“We were pleasantly surprised that they kept so many stores open when Sunrise took over,” he said. “It’s not surprising that a portion of stores [have] borderline profitability, particularly with high business rates. We just want a profitable HMV on the High Street and if that means they have to lose a number of stores, unfortunately that’s the way of the world.”