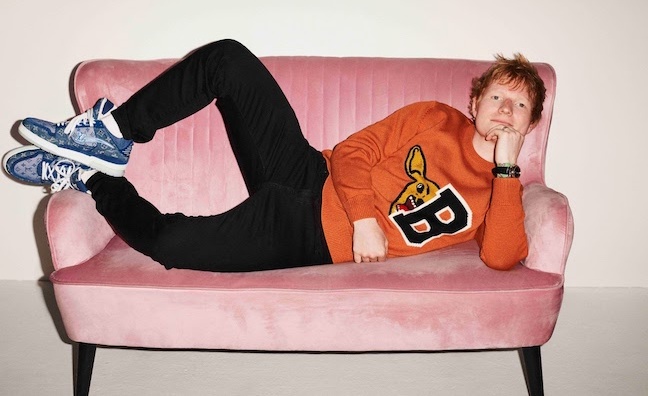 Ed Sheeran’s new album = has dropped and his team at Atlantic will be aiming to smash his own week one streaming record for ÷, which was set over four years ago.

Back in March 2017, at a time when labels were still shifting their strategies towards the nascent streaming market, Ed Sheeran established a benchmark with a huge week one streaming total for ÷ of 78,944 equivalent sales (Official Charts Company). No one has since come close to beating it, except perhaps until now.

“We expect = to be one of the most important releases of the year, both on Spotify and for the broader music industry,” said Sulinna Ong, global head of editorial at Spotify and Women In Music 2021 Music Champion. “That said, when it comes to breaking records, we try to avoid setting expectations around specific releases or making comparisons with previous albums.

"For this album, we also have a huge opportunity to promote Ed’s catalogue on Spotify, pointing newer listeners and those discovering his music for the first time to his previous albums.”

“The number of people streaming has grown significantly since ÷,” he told Music Week. “A significant number of those listeners were introduced to streaming through Amazon Music, so I would expect the performance of = to eclipse Ed’s previous [solo] release.”

“Taking into account the growth in streaming subscriptions and users since the release of ÷, I would not be surprised if Ed smashes his own record,” added Deezer’s UK music editor Adam Read. “Ed’s vast audience stretches across multiple generations, and with those older fans now gravitating towards streaming, this should reflect another huge week one for him on streaming platforms.”

Such is the appeal of Sheeran, the album release is also an opportunity to further expand the streaming market.

“As we all know, Ed Sheeran is a superstar in the UK, one of the biggest artists of his generation,” said Read. “He has broken chart records all over the world, and performs to hundreds of thousands on his tours. The fact his  audience is stupendous in scale is really important for the streaming market. Not just for our users that love his music, but also because  there are definitely still fans we can bring over to the streaming space.

“The challenge is creating engaging bespoke content that appeals to these older audiences that have yet to convert to [streaming] or are maybe even wary of it.”

“There’s no denying Ed’s unique place in UK culture but also on an international scale,” she told Music Week. “He transcends music stardom and reaches people in a way few other artists across any medium do. Ed is currently one of the most listened to artists on Spotify worldwide, so of course this is an especially significant release.

“Only a handful of releases each year have the power to, on launch, achieve international cut through - and this is one of them. The UK is one of the most mature streaming markets globally, and continues to grow thanks in part to releases from artists like Ed.”

Click here to read our = release day interview with Atlantic.