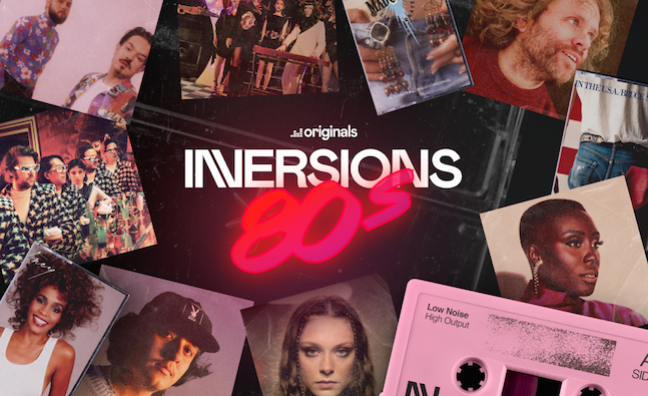 Deezer has released InVersions ’80s, a brand new Originals album in which alternative artists take on ’80s classics in their own style.

The compilation is available exclusively from today (May 25) on the music streaming service.

For the latest edition of InVersions, Wolf Alice have put a modern guitar-fuzz spin on Roxy Music’s More Than This; Holly Humberstone contributes a tender reworking of Prince’s I Would Die 4 U; and Laura Mvula reinterprets Toto’s Africa.

“’80s music is seeing a resurgence like never before, with a whole new generation of fans embracing the sounds of this unique decade,” said Nigel Harding, Deezer’s VP of global artist marketing. “So it felt completely natural to invite today’s emerging musical stars to put a modern spin on their favorite ’80s anthems, and the results are like hearing them all again for the first time. Just like our last InVersions project, which saw a growth in streams of over 200% for some of our featured artists, I’m confident music fans from all over the world will love this new Originals album.”

Holly Humberstone said: “I am so excited to be a part of InVersions because the ’80s is an era that continues to inspire me. I chose I Would Die 4 U by Prince because he’s my all time favourite artist and I wanted to pay tribute to him in some way. I think it’s a beautifully simple but effective song and I love how the melodies are really static. Being able to put my own spin on it felt super special and I hope you all enjoy listening!”

Laura Mvula said “I chose Africa by Toto because it’s an 80s classic. It feels like music that I would write today and it fits in with the sound of my album.”

InVersions ’80s will shine a spotlight on breakthrough artists from all over the world, including Norway’s viral sensation Boy Pablo, Mexican-American bedroom pop act Cuco and emerging US R&B star Cautious Clay.

Deezer’s debut InVersions compilation, released last year, featured 10 breakout names including Arlo Parks and Alfie Templeman, plus more established alternative artists such as Fontaines DC and Benee. The record became one of the most successful Deezer Originals projects to date.

13.    L’Imperatrice - I Wanna Dance With Somebody (Who Loves Me) [Whitney Houston]