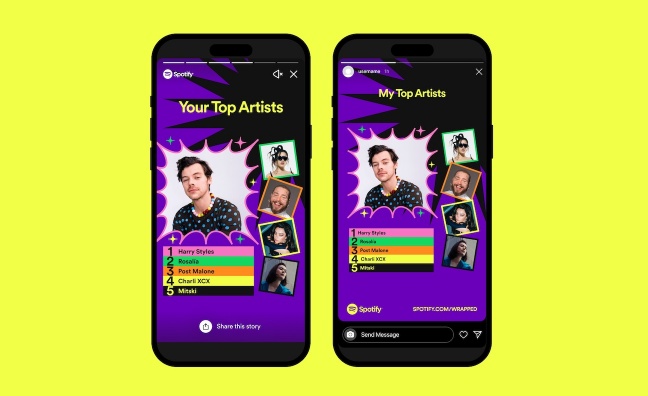 Spotify has unveiled its 2022 Wrapped campaign and personalised user experience.

The year-end data reveals the top artists, songs, albums and podcasts for its 456 million listeners around the world. Starting today, eligible users can also access their personalised 2022 Wrapped experience.

Harry Styles’ As It Was was the most streamed song globally with 1.6 billion streams, followed by fellow UK act Glass Animals’ Heat Waves (1.1bn). Ed Sheeran was the top UK artist globally (at No.6), followed by Harry Styles at No.7.

While catalogue makes its presence felt, as on the Deezer round-up, Spotify is able to engage listeners with new releases too. The Top 5 albums in the UK are all current releases, with Olivia Rodrigo’s Sour the only one over 18 months old.

Following the release of her latest album Midnights last month, Taylor Swift is the most listened to artist this year for Spotify users in the UK. Although only released in October, the album has 805m streams in the UK. The album release was accompanied by a global campaign which saw Spotify billboards appear around the world, teasing new lyrics from the album in the days leading up to release.

As well as his global victory, Harry Styles takes this year’s top song for UK fans, with As It Was reaching close to 97m streams on Spotify in the UK in 2022. Styles is joined in the Top by Kate Bush’s Running Up That Hill (A Deal With God) on over 63m streams in the UK, following its appearance in Stranger Things.

For the third year in a row, Bad Bunny took the No.1 spot for most-streamed artist globally, with more than 18 billion streams this year.

Top Artists in the UK

Top Songs in the UK

6. Where Are You Now - Lost Frequencies

Top Albums in the UK