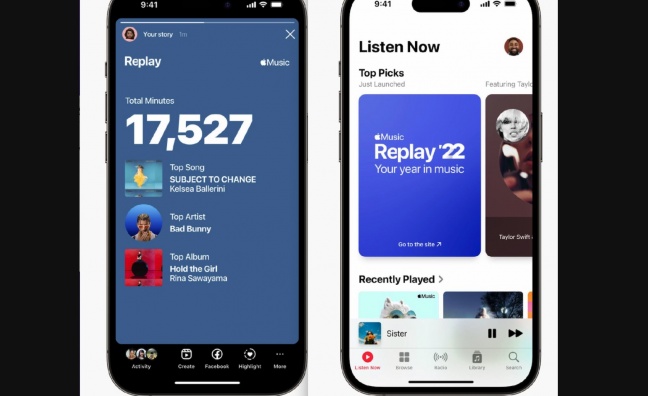 Apple Music has rolled out a redesigned Replay experience, which offers subscribers expanded listening insights and new functionality, including a personalised highlights reel.

From today, Apple Music subscribers can learn their top songs, artists, albums, genres and more for 2022 in a redesigned Replay experience.

“When we first launched Replay, the feature became an instant fan favourite on Apple Music, and we really wanted to develop the experience further and make it even more special, personal, and unique for subscribers,” said Oliver Schusser, Apple’s vice president of Apple Music and Beats. “The music we enjoy throughout the year becomes like a soundtrack, and it’s really fun to be able to go back and relive those meaningful and memorable moments over again.”

Superfans can discover whether they are in the Top 100 listeners of their favourite artist or genre.

The Replay roll-out coincides with Deezer’s MyDeezerYear today, while Spotify users are gearing up for Spotify Wrapped.

Apple Music also revealed its year-end charts, spotlighting 2022’s top songs, Shazams, fitness songs, and most-read lyrics. Once again, the streaming hits of 2022 are often releases from the prior year.

Apple Music’s Top Song in the UK & Ireland for 2022 is Harry Styles’ As It Was, while the Most Shazamed Song in the UK is LF System’s Afraid To Feel.

Hip-Hop continued to lead the Top Songs chart, accounting for 32 of the Top 100 songs of the year. Pop followed, with 23 songs on the chart, followed by R&B/Soul, with 11 songs. Latin came in fourth, with eight songs, followed by J-Pop, with six.

The lyrics chart is among the most global charts, with 29 of the 100 songs being in a language other than English. It is led by We Don’t Talk About Bruno from Encanto.

Leading the Shazam Chart was Cold Heart (Pnau Remix) by Elton John and Dua Lipa, which marked Elton John’s first time topping the Shazam global chart. The track was No.1 on 17 national charts.

Elsewhere, Bad Bunny - Apple Music’s 2022 Artist of the Year - became the first Latin artist to have the biggest album of the year with Un Verano Sin Ti.

4. Lost Frequencies & Calum Scott- Where Are You Now