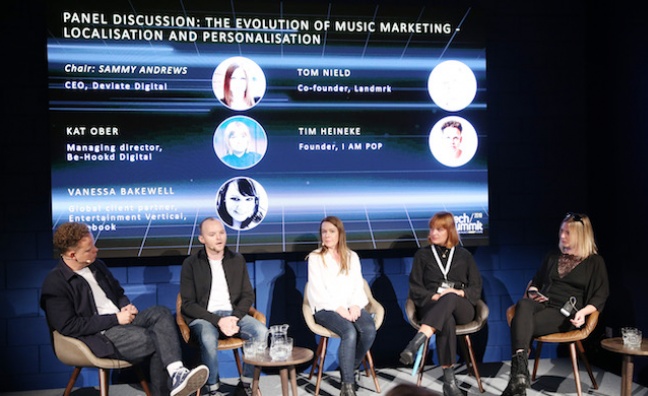 Execs including Facebook’s Vanessa Bakewell, I Am Pop co-founder Tim Heineke and Deviate Digital’s Sammy Andrews shared their key insights on the trends for digital marketing during the Music Week Tech Summit.

Bakewell, global client partner, entertainment vertical, has already recently had the industry talking about her three-second rule for engaging audiences with content, which she discussed in Music Week. It was a theme she returned to today.

“People scroll on average the equivalent of a Big Ben every day,” she told the Tech Summit audience at The O2’s Indigo venue.

She said that even the new Motown movie documentary highlighted the need to grab people’s attention immediately. “You just need to hook people quickly,” added Bakewell.

Her top tips included trying to craft a story about the artist and avoiding a sales-type tone, and ensuring that video is front and centre.”

Andrews and Kat Ober, MD of Be-Hookd Digital, bemoaned the last-minute approach of the music industry in certain cases in terms of planning social marketing campaigns. Ober said that some artist teams aren't thinking about how music video will look on socials.

One of the evolving areas of marketing that came under discussion was messaging apps and the opportunity to engage with fans and up-sell.

“It’s such an exciting area because it’s personal and one-to-one,” said Bakewell. “But you have to care about the community, it will be serving the super-fans.”

I Am Pop co-founder Tim Heineke said artists and labels need to get their messaging app strategy right. He identified one label exec who wanted a messaging bot that allowed fans to apparently engage with an artist’s pet dog.

“It’s easy to build a really bad one, it’s hard to build a good one and it’s expensive,” he said. “Keep it simple, if you turn it into something chatty it’s going to be difficult.”

Bakewell praised Years & Years’ marketing campaign including a microsite and their own cryptocurrency. She also identified the live sector as having a “lot of opportunity” in terms of app messaging.

Augmented reality and location-based apps were also identified as evolving trends during the panel.

Tom Nield, co-founder of Landmrk, said the company had seen “spectacular” results from the personal feeling a fan gets from location-based engagement.