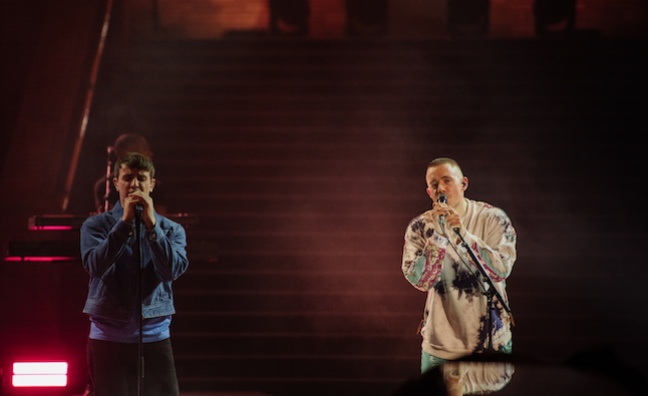 The hour-long concert was staged by new business Driift, founded by ATC Management’s Ric Salmon and Brian Message, which has now officially launched to produce and promote ticketed online events for either geo-locked or global audiences. Beggars Group are founding investors and shareholders in the company, which oversees ticketing, production, licensing, rights management and digital marketing.

"Ticketed livestreaming is currently a space that no one controls, and we believe there is a long-term and commercially viable business here," said Salmon. "It’s incredibly exciting. However, the ultimate goal of Driift is empowerment. We’ve created a truly agnostic service that will enable artists and their teams to recreate the unique magic of live performance, and to curate an experience worth paying for."

Message added: "It strikes me that this is just the beginning of an exciting opportunity for artists and their teams to create new art that many will choose to pay for. If we get this right, ticketed streamed productions, whether live shows or something not yet dreamt of, can comfortably sit alongside promotional videos, traditional live shows and other ways fans and artists relate."

Driift previously piloted the concept with commercially successful livestream shows from Laura Marling at Union Chapel and Lianne La Havas at Roundhouse. It has also announced events a one-off worldwide performance by Biffy Clyro on Saturday August 15, which will see the band playing their forthcoming album A Celebration Of Endings from an iconic Glasgow venue, and Sleaford Mods at The 100 Club on September 12.

Further high-profile shows will be announced over the coming weeks, while the business is now expanding its offering outside the UK, with a number of shows being set up in North America.

Ruth Barlow, director of live, Beggars Group, said: "We’ve felt for a long time that livestreaming has been undervalued, so when approached by Brian and Ric about getting involved in the world of PPV, it took all of a minute. We’re excited about the creative and commercial opportunities for the business, the artists and their fans; who no longer have to be in a particular city at a particular time to experience unique live music events. This is not a replacement for live, this is a coming of age for livestreaming."

Island-signed BRIT Award nominee Kennedy, who is managed by Tap Music, hit No.1 last year with his debut album Without Fear, which has moved 94,700 units to date, according to the Official Charts Company. The singer/songwriter recently spoke to Music Week for our Tap Music cover story.

Ed Millett, director of Tap Music, said: "The exciting thing about this new model is the opportunity to do something creative and unique."

Kennedy's agent Paul Wilson of CAA said: "In a very difficult moment for the live industry it has been a pleasure to work with the team at Driift. We are all entering a new world with these shows but they have provided both the expertise and passion to make these work. It has been fantastic to put these groundbreaking shows on sale and see artists selling tickets and connecting with their fans again."