Wham! finally reach No.1 with Last Christmas after 36 years 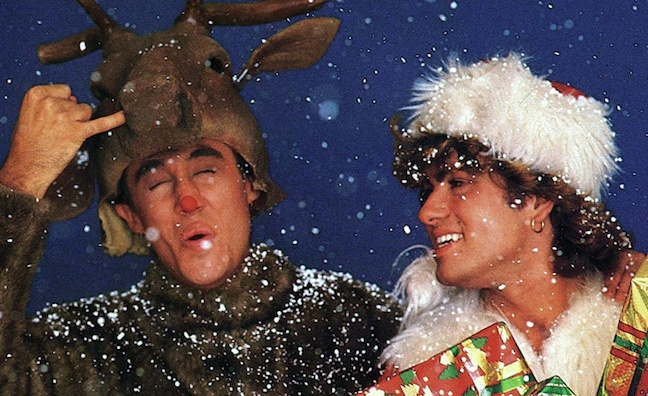 Wham!’s Last Christmas has finally made No.1 after 36 years.

Last Christmas was famously held off the top spot by Band Aid during Christmas 1984. The single has now climbed 3-1 to reach the summit.

Last Christmas (Sony CG) has finally reached No.1 on the fourth anniversary of George Michael’s death on Christmas Day in 2016. The first chart of 2021 covers sales from December 25-31.

The Wham! song has also set a new record for the longest time taken for a single to reach No.1, at 36 years, overtaking Tony Christie’s (Is This The Way To) Amarillo, which took 33 years and four months to reach the summit in 2005.

Former Wham! member Andrew Ridgeley posted on Twitter that he was "somewhat amazed" by the No.1 and described it as a fitting tribute to George Michael's "songwriting genius".

I am delighted, somewhat amazed & profoundly pleased that WHAM!’s iconic Christmas classic Last Christmas has finally achieved the accolade of becoming a No 1. It’s a fitting tribute 2 George’s songwriting genius and 1 of which he would’ve been immensely proud & utterly thrilled.

Last Christmas racked up 9.2 million streams in the past week.

But it was a chart battle in which superior download sales helped Wham! to finally reach No.1. Last Christmas sold 1,555 downloads last week compared to 761 for All I Want For Christmas Is You – a lead of 794 that was, ultimately, crucial to their victory. If any Wham! and George Michael fans were encouraging fellow devotees on social media to download the track to help the weekly sales total, then it’s a low-key campaign that’s clearly paid off.

Martin Talbot, chief executive, Official Charts Company, said: “This is a fantastic record for Last Christmas. Just a few weeks after Mariah Carey’s All I Want For Christmas is You reached No.1 after a 26-year wait, for the Wham! tune to make its own impact after so long really shows how much the British public love their Christmas classics.”

Previously, Last Christmas was the UK’s best-selling single to never reach No.1, accumulating 1.9 million pure sales to date across its lifetime. That title is now handed over to Maroon 5’s Moves Like Jagger ft. Christina Aguilera (1.55m pure sales), a No. 2 hit in 2011.

Amazon Music claimed a No.1 with Ellie Goulding in the post-Christmas chart in 2019 when her Amazon Original cover of Joni Mitchell’s River (Polydor) climbed from 11-1. While Amazon Music hasn’t repeated that achievement, they have secured a double chart success with Amazon Originals by Atlantic-signed Jess Glynne (This Christmas, No.3) and Justin Bieber’s cover of Rockin’ Around The Christmas Tree (Def Jam/EMI, No.4).

LadBaby's charity single and Christmas No.1 Don't Stop Me Eatin' fell to No.78.

Taylor Swift’s Evermore (EMI/Republic) held at No.2, while Dua Lipa – Music Week’s Artist Of The Year for 2020 – climbed from No.18 to No.3 with Future Nostalgia (Warner Records), its first Top 5 placing since June.

Pop Smoke’s Shoot For The Stars, Aim For The Moon (Polydor/Republic) climbed 17 places to No.5.

In a quiet chart week for new releases, the only new album in the Top 20 is Whole Lotta Red by Playboi Carti (Polydor/Interscope) at No.17.