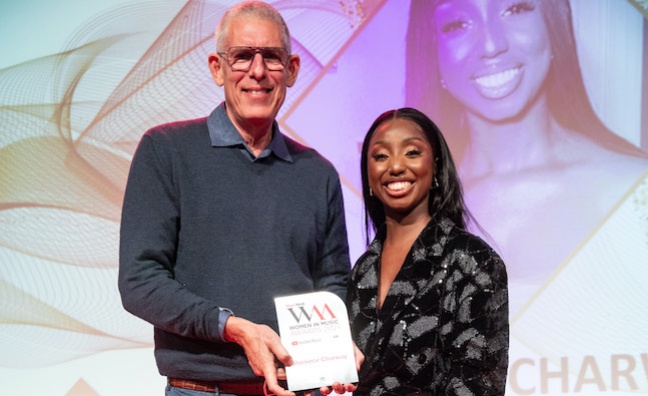 How do you feel about being named this year’s Rising Star?

“Obviously it’s amazing and very unexpected. I’m really really excited. When I think of all the amazing people who have won Women In Music Awards before, it makes me very excited to be a part of that list. Mostly, I’m really pleased that the judging panel recognise the work I’ve done.”

How long have you been at YouTube in your role as an artist relations manager?

“I've been at YouTube since February 2019. I was a temp and then got converted to a full time employee last July. It's been an amazing experience. I feel that people have listened to me in terms of my creative ideas, or in terms of artists to work with and that people have really championed me. It’s really built my confidence and it’s meant we could do some amazing things.”

You curated YouTube’s Excellence Brunch, which took place two days before the BRITs in 2020. Can you tell us about that?

“The great thing is that we work closely on a global level. Tuma Basa [director, Black music and culture] and Lyor Cohen [global head of music] really wanted to do something around either the Grammys or the BRITs and we pushed really hard for the BRITs because we hadn’t done anything like that would celebrate Black British music and culture before, to have everyone in that room and really celebrate that.

"I spent most of the day running around, but the feedback was incredible. People felt it was amazing to be able to stand in a room with their peers and congratulate each other on the work they’d done. People were saying, ‘Oh, you work at that label, I’m with this artist’s team’ and it felt like a community. That’s why people really enjoyed it.”

You were behind the Legacy Series: Fashion x Music too. ..

“I love both fashion and music. I thought that there were a lot of UK Black designers and a lot of UK artists who were really fashionable and that they hadn’t merged properly. How could we showcase that both live and with a video platform? We ended up working with Westfield and it was incredible to have that space where Black designers could actually sell their clothing.”

Where do you see YouTube sitting within the wider music industry?

“I think it’s still growing and it will be very important in years to come. I think it’s the place where everyone puts a music video, so it will always be an important part of artists’ campaigns. But we’re also looking at new ways of creating content, one of which is Shorts where artists and creators can make videos with their phones. It’s going to be an incredible couple of years.”

I think as an industry as a whole, we need more education and understanding about what's coming next

And where do you see yourself going in the next few years?

“I want to stay here and grow. I want to push more artists onto the platform and hopefully in a couple of years be head of a team, bringing more Black executives into the music industry and into YouTube and really helping to champion them. YouTube is an amazing place to work, the way it’s structured and the way they champion people.

"Before I came here I was a marketing assistant at Columbia Records at Sony Music and before that I was at a media agency. I left the agency to do an internship at Columbia.”

What was the draw of the music industry?

“I’ve always wanted to work in this industry. I have a lot of siblings and we all love music, so I was always around it. I grew up on hip hop, R&B, and pop, and my dad would always listen to Bob Marley in the car. My first concert was Britney Spears on my 16th birthday; my sister surprised me with the tickets. But I can’t do much in terms of creating music, I’m really not very musical. So I always wondered how I would get into it, I mean, I didn’t even know my job existed until two years ago. You don’t realise what you can do. There's a lot of things that go on behind the artist. But I like being behind the scenes and really being able to push things.”

What would you change about the music industry right now?

“I feel like the industry is slowly moving into the right direction. But I feel like there's a lot more that could be done in terms of labels or DSPs really helping artists in terms of just channelling them and getting them to understand the music industry a little bit more. Because it is ever changing, there's so much happening. I think as an industry as a whole, we need more education and understanding about what's coming next. How do we adapt now, instead of something happening and then trying to adapt after? I feel like we're getting there, but I feel like it's still a little bit slow.

"I would have more opportunities for young people too. I think about my journey too, if I knew about internships, would I have gone to university? If we can educate more young people about what’s out there, about the types of careers, then I think we’d see a big shift in the types of people coming through.”

What advice would you give another potential Rising Star?

“You need to really show what you’re passionate about. Make yourself really visible in terms of what your goals are and what you want to champion, especially externally. Don’t just do something and hope it will be seen. I'm lucky and blessed. I had such an amazing team around me to really champion me and allow me to come out of my shell, so find a support system and learn new skills. You never know what will transfer to your next job. There are so many jobs that you don’t know exist and one of them could be your dream job.”