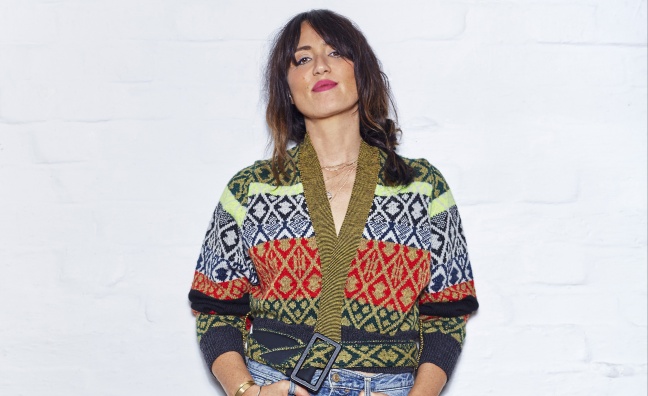 A quick glance at KT Tunstall’s formidable body of work over the past 12 years tells you everything you need to know about why she is this year’s Music Week Women In Music Inspirational Artist Award winner.

Her Mercury Prize-nominated 2004 debut album Eye To The Telescope has gone five times platinum on sales of 1,682,867 and peaked in the chart at No.3, while 2007 follow up Drastic Fantastic has gone gold on sales of sales of 291,322, also peaking at No.3.

She then went on to release album number three, Tiger Suit, in 2010, and album number four, Invisible Empire // Crescent Moon, in 2013, both of which made the Top 20.

In 2006 she won the Ivor Novello Award for smash hit single Suddenly I See. She also picked up the BRIT Award for Best British Female in the same year, before receving a Grammy nomintion in 2007 for the track Black Horse And The Cherry Tree.

On top of her studio albums, she has released numerous extra-curricular records, including live albums, a Christmas album and has appeared on multiple motion picture soundtracks, including the likes of The Devil Wears Prada, The Kid, Million Dollar Arm and Winter’s Tale.

Now, having just released her fifth album Kin, which peaked at No.7, she has been honoured with the Women In Music Inspirational Artist Award; something that she says means a great deal.

“It’s fantastic to win this award,” she tells Music Week. “I think it’s really helpful to recognise women who are making strides to attain more of a sense of equality in lots of different areas of life.

“I suppose this is probably my favourite title of an award to win,” she continues. “It’s a huge compliment and one of, if not the most exciting, things is when I meet people after a show and they say they’ve taken up writing or taken up playing an instrument or taken up performing as a result of what I do. Or it’s helped shift a mindset of a fan in some way. It’s rewarding as a writer to hear that.”

So who were Tunstall’s big influences in her formative years?

“One of my early idols on TV was Kim Wilde; she was one of the first female pop stars I saw who was less conventional and had a rebellious streak.

"It was just such an amazing testament to her power and influence and continuing demand for good work and great choices in who she works with.

“Then I loved Eddi Reader who was another Scottish singer. And then I kind of digressed into more jazz and blues and really got into Ella Fitzgerald and Nina Simone.

"I’m always inspired by musicians who I felt were musicians before their gender. Chrissie Hynde is a songwriter, her gender is secondary to what she does. Same with Patti Smith.”

While Tunstall herself says that she has encountered little personally in the way of gender discrimination in the industry, she has witnessed first-hand the outmoded attitudes of certain execs toward signing and promoting female acts.

“The first experience of sexism I had was trying to get a record deal. I’d got my publishing deal, Norah Jones had just swept the board and it was really the first time in a long time that a girl with an instrument had made money in music.

"And I remember thinking, Well, I’m sure you’ve got another 20 fucking guys who play guitar, so why do you only need one girl? But it didn’t put me off, it just made me think, I don’t want to work with someone with that attitude.

“I ended up signing with quite an obscure smaller label in Relentless. I was a 29-year-old Scottish folk singer; it was an outside bet, but they didn’t see it like that. They heard my songs and they saw personality and they saw performance ability. I didn’t feel like I was being scrutinised in any way that a male artist wasn’t as well.

“And from a live perspective, I feel like being a female has been a real boon, and I feel like I’ve commanded respect over and above what I might have done as a man.”

If Tunstall has any advice for young female acts looking to pursue a career in music, it’s to rail against any obstacles that would not also stand in the way of a male artist’s career trajectory. And, perhaps above all else, to make sure that they are always honing their craft.

“For things to really change it is going to require women with the gall and the balls and the warrior spirit to step up and not accept being put in some victim role in these situations, and so the more role models of women who won’t accept that position the better.

“I believe that the thing that will serve a musician very well is being an exceptional performer and being as good as you possibly can at whatever you do.

"You are going to get criticised at points, but if you are being true to your heart, then that is success in itself.”