As Boris Johnson steps down, the music industry awaits its eighth Culture Secretary in six years 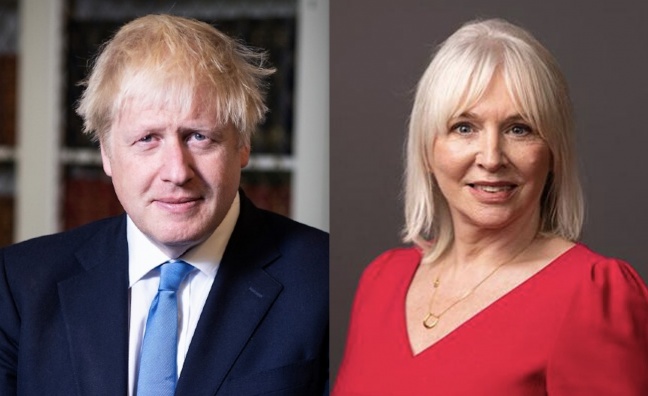 The music industry is - like the country - taking on board the news that Boris Johnson is stepping down as Prime Minister and assessing the merits of any replacements.

The departure of Johnson - in the autumn or sooner if he’s forced out - will likely be followed by that of ultra loyalist Culture Secretary Nadine Dorries. The outspoken government minister, who’s been openly hostile to the BBC and its funding model, will be highly unlikely to continue under a new PM.

Dorries has spoken about how the government is looking closely at the music industry and streaming alongside the current Competition & Markets Authority competition investigation. She has also been looking at the problem of bullying within the sector with insights from Rebecca Ferguson.

However, the Music Venue Trust noted that she was the first Culture Secretary to decline a meeting with the organisation that protects grassroots venues since 2014.

Julia Lopez, Minister Of State for Media, Digital and Infrastructure, was little known in the industry following her appointment last September. Lopez, who has been working on the Channel 4 privatisation plans, joined the ministerial exodus from the government last night.

Last month, a UK digital strategy was unveiled by Chris Philp, Minister for Tech and the Digital Economy.

“In the music sector, there are challenges around creator remuneration from music streaming, with older artists in particular being potentially disadvantaged by the rise of streaming,” said Philp. “DCMS and the Intellectual Property Office are exploring these issues alongside digital streaming platforms and the music industry. We are due to report on our findings in the autumn, and will consider the type of action needed to ensure a fairer music streaming market for all.”

While some progress has been made on the key issue of visa-free EU touring access for UK artists including a deal with Spain, the political chaos creates further uncertainty for the music industry (along with the rest of the country).

Of course, the music business has been used to a lack of consistency at the top. Dorries’ replacement will be the eighth Culture Secretary in six years. Many of them made little impact or engaged fully with the music industry.

On the issue of EU touring access and the lack of provisions in the withdrawal agreement, the touring industry has often had to deal with pro-Brexit ministers.

A pressing issue for the industry is the government’s response to its consultation document, Artificial Intelligence and Intellectual Property: copyright and patents. UK Music has written to Nadine Dorries expressing concerns about allowing artificial intelligence companies to “launder” music to generate new content.

“We are greatly concerned about plans to allow third parties to use creative works, including music, for data mining purposes, without the need for creators and rights-holders to provide permission,” wrote UK Music chief exec Jamie Njoku-Goodwin.

“This would significantly undermine the basic principles that the creative industries are based on and runs contrary to the welcome ambition you have set out to protect our world-leading creative industries and build on their success. We seek your urgent intervention to reject the current plan ahead of any decision to take forward legislation.”

But that will now presumably be an issue for Dorries’ successor to deal with.