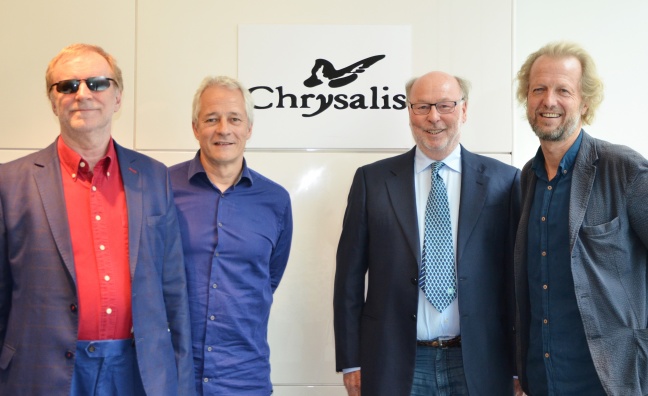 The agreement sees the co-founder and original owner of Chrysalis Chris Wright CBE, reunited with the legendary label.

Wright returns as non executive chairman of the label 27 years after selling the company to EMI.

Artists on the roster include The Specials, Sinead O’Connor, The Waterboys, Ten Years After, Debbie Harry, Fun Boy Three, Ultravox, Generation X, the Two Tone label and many more. The label will also look to sign new artists. The deal has been completed with current owners Warner Music Group and comes into effect on June 24, 2016.

Chrysalis was co-founded by Wright and Terry Ellis in a student basement flat in 1968 and went on to become a defining British label, launching and developing the careers of a number of iconic artists and enjoyed huge success in the UK and internationally.

Jeremy Lascelles, CEO Chrysalis Records said: “This is a wonderful moment. Chrysalis Records is for the first time in many years, back in the hands of an independent. And I’m doubly delighted that we have got Chris on board as well. For him to be reunited with a company that he started nearly 50 years ago is pretty special. Chrysalis is an iconic brand with an incredible catalogue containing some of the great songs of its era - the likes of Ghost Town, Nothing Compares To U, The Whole of the Moon and Vienna, still sound as relevant today as they ever did.”

Chris Wright added: “For me this is an historic and emotional day as Chrysalis is back in the hands of myself and my partners at Blue Raincoat. We’ll run it as an independent, revitalising the catalogue for the digital age. We believe it can become a new home for many established artists to sit alongside the incredible acts we already have.”

Robin Millar, CCO, Chrysalis Records said: “There are reasons why great artists sometimes get through and sometimes don’t. A great artist needs time, constant support and a strong team. That time and teamwork has been conspicuously absent in recent years. It’s no coincidence we don’t have enough artists that change the thinking of a generation today. We’re letting the air back into that room and re-igniting the genius that resides in the Chrysalis vaults which is a big part of that process."