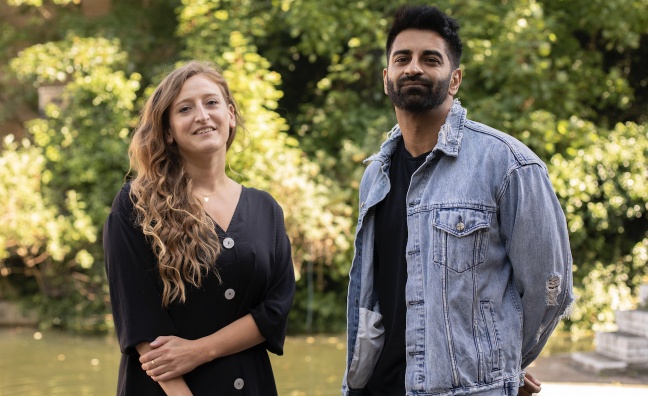 Ministry Of Sound president Dipesh Parmar has told Music Week that the diverse nature of the label’s team means that they “come up with ideas that other labels wouldn’t”.

Parmar was speaking alongside general manager Amy Wheatley for the cover story in the new edition of Music Week. The pair steering Ministry Of Sound’s new era were joined by head of digital marketing Negla Abdela and playlisting & marketing manager Jason Farmer, while September Management’s Jonathan Dickins discussed working with team Ministry on London Grammar, who scored a No.1 album in 2017.

The year before, Ministry was acquired by Sony Music UK in a deal that saw Jason Iley finally link up with Parmar, an exec he’d wanted to work with for years. In the four years since, Ministry’s new look team has masterminded nine Platinum singles, mastered TikTok and scored the first No.1 of lockdown, with Saint Jhn’s Roses.

“We were in an unknown world when Amy joined, and we share the same vision,” said Parmar in our interview, which subscribers can read in full online here. “There’s a reason why the label is having a good amount of success right now and it’s down to the strategy and focus that Amy and I implemented, the team and the projects we sign.”

Wheatley said that the team quickly found its groove when the business went into lockdown in March. “It took a couple of weeks for people to get comfortable and then Saint Jhn was the first No.1 of this period. It was there for two weeks and we had to chase that, it wasn’t a given.”

The pair said that Ministry has retained its independent ethos since the merger and operates in a vastly different way to any of its partner labels within Sony.

“We’ve always been the underdog, even when were independent,” said Parmar, who’s been at Ministry since arriving to do work experience 20 years ago. “Now we’re within Sony, we can’t offer high digital royalty rates and short-term deals like we once did. At the start, we were pushing and pulling about whether we should be more pop or singer/songwriter, and I think we can be all things, but we had to get the centre of it just right.”

He emphasised the importance of the lockdown No.1. “It focused everyone straight off the bat and that was so important for the label to achieve that position in the hardest time that any of us have faced,” he said. “It gave everyone a sense of belonging.”

Wheatley said Ministry’s mission is “to be that authoritative voice of dance and popular culture”, adding that it has surpassed expectations since Covid-19 struck.

“On the curation and playlisting side, our content had to pivot quite heavily,” she said. “Within a couple of months, we’ve hit all our KPIs for followers across DSPs and socials that we set for the year. That drives more positivity and creativity, too.”

Wheatley also opened up about Ministry’s TikTok strategy, which took shape when they signed Regard’s Ride It after it made a splash on the platform. The track peaked at No.2 and now has 1,025,299 sales to date, according the Official Charts Company.

“All the platforms feed into each other, you can’t have a hit with just one,” said Wheatley. “TikTok definitely helps to ignite something, but you need to have all things soaring. A lot of our music is so feelgood and uplifting and that just works on those platforms and with that audience, it’s just a natural fit. TikTok works best when it’s genuine, when something comes from a TikToker or an artist who has an audience. If you try and recreate or force things then it rarely connects.”

“For someone like Regard, it’s a very content-driven campaign, you’re taking more of an album strategy when you’re building singles now, and you need to,” she added. “You need to keep the longevity going.”

Parmar and Wheatley talked about the diversity of their team, and with head of A&R Zeon Richards part of the Black Music Coalition, Ministry has taken up a central position in the fight against racism in music.

“It’s not just about doing Black Out Tuesday and then forgetting about it, we have a responsibility to continue the conversations and make things better by any means possible,” said Parmar.

“We’re talking a lot within Ministry about what we can do to focus energies and everyone’s got lots of ideas,” he added. “We’re a diverse team and we’re coming up with things that maybe other labels wouldn’t. We hope education continues and helps diversify the industry and that people of black origin have more of a voice.”

Subscribers can read the full interview online here. To subscribe and never miss a music biz story, click here. Make sure you can access vital music biz information wherever you are by signing up for our digital edition here.