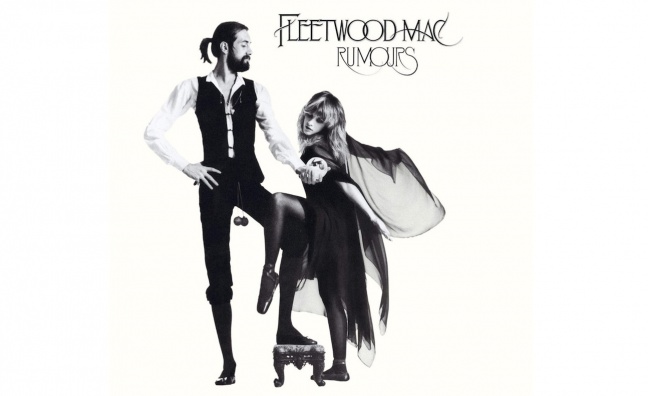 Released in February 1977, the British-American group’s 11th album was an immediate success, selling millions of copies.

Decades later, it’s now enjoying a new lease of life on streaming, as well as being a linchpin of the vinyl revival. Dreams even became a viral hit on TikTok in 2020.

In its anniversary chart week, Rumours (Rhino) placed at No.21 (3,350 sales - Official Charts Company). Its weekly sales total apportioned 64.9% to streams and 31.8% to physical copies, along with a modest amount of downloads.

Now to some of Fleetwood Mac’s incredible achievements over 45 years with Rumours, as researched by Alan Jones in his latest Music Week charts analysis.

Rumours has UK sales to date of 4,633,7311, including 482,250 from sales-equivalent streams, making it one of the 10 biggest-sellers of all-time. Yet it only spent a single week at No.1, climbing to the summit in January 1978, a year after its release. Rumours got off to a slow start in February 1977, debuting at No.57, but entered the Top 10 the following week and stuck around.

Five songs from the album charted - Go Your Own Way, Don’t Stop, Dreams, You Make Lovin’ Fun and The Chain (belatedly in 2009) - although none of them reached the Top 20. Dreams returned to the Top 40 in 2020 thanks to viral video of a skateboarder drinking cranberry juice.

Rumours has become more successful than ever in recent years. It is currently in the Top 40 for the 60th week in a row, and the 306th week in total, the latter being a record for a regular studio album. Simon & Garfunkel’s Bridge Over Troubled Water is in second place (279 weeks) after Rumours overtook it last year. Rumours is fourth among all albums for total weeks in the Top 40, behind ABBA’s Greatest Hits and soundtrack albums The Sound Of Music and South Pacific.

Furthermore, Rumours has spent 928 weeks (almost 18 years) in the longer Top 100 list – by far the highest tally for a studio album, with Pink Floyd’s Dark Side Of The Moon (also released by Warner Music's Rhino) a distant second on 544 weeks.

Rumours has been in the Top 75 without break for the last 258 weeks. That is only one week less than the all-time record for most consecutive weeks in the Top 75 by an album. Ed Sheeran’s ÷ tops it by just one week, having started its ongoing Top 75 run in the week prior to Rumours’ return to the chart listing in 2017.

As Alan Jones explains, a curious chart anomaly has cost Fleetwood Mac that particular chart achievement: “Rumours really should have the record itself – the week that ÷ debuted at No.1, Rumours was serving a single week return to the budget album chart. Whether this was an error, or due to a genuine seven-day reduction in price is not clear, but had it not been disqualified from the main chart, where it would have been No.45 that week, its current Top 75 run would be 265 weeks.”

Despite its huge success over four and half decades, Rumours is actually only Fleetwood Mac’s second highest chart entry this week. Streaming perennial 50 Years - Don’t Stop climbed two places to No.9. The 2018 hits collection, which has sales to date of 732,377, has amassed 162 weeks in the Top 40 and 170 in the Top 75.