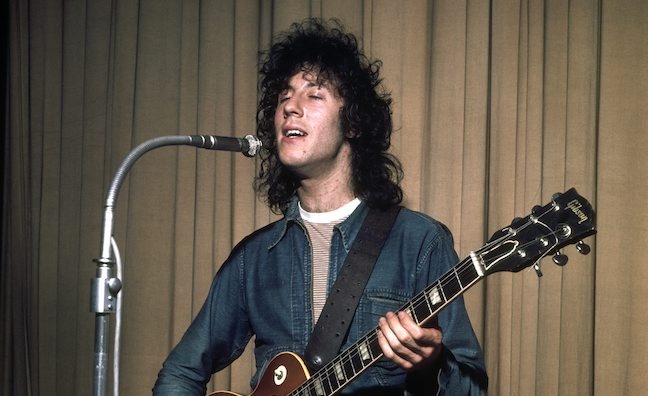 Fleetwood Mac are set for a chart entry this week with their new box set covering the late ’60s and ’70s.

Fleewood Mac 1969-1974 is the latest catalogue release from Rhino. The 8-CD boxed set includes remastered versions of all seven studio albums from the era, including the band’s third LP Then Play On, the final record featuring co-founder Peter Green (pictured).

As an accompanying release, Rhino continues to bring Fleetwood Mac’s early albums back into print on vinyl with a 4-LP/7” box set, including the unreleased 1974 live album along with Penguin (1973), Mystery To Me (1973) and Heroes Are Hard To Find (1974).

As recently revealed by Music Week, Fleetwood Mac are now Rhino’s biggest act on streaming. The band have 18,029,863 Spotify followers.

The 2018 collection 50 Years – Don’t Stop peaked at No.5 and has sales of 445,622 (including 264,560 from streams), according to the Official Charts Company. It is currently at No.15 thanks to consistent streaming. Rhino altered the chronological CD tracklisting to make it more hits-focused on DSPs.

“Our objective is always to introduce a group like this to a new generation. It’s all about curation. When you've got an act with a 53-year career and 17 studio albums, numerous line-ups and different genres through the different eras, you need to curate it properly. We're very fortunate with Fleetwood Mac in the sense that they do fit into lots of different playlists, and lots of different mood-based playlists. We work with the DSPs and look for the gaps, make sure we highlighting their music around certain anniversaries.

“It’s also about curating the music and presenting it in a new way, so you can present the latter day stuff separately, and you can present the middle years and the earlier years. It’s about working with the band around anniversaries and telling the story, making sure that people feel they're still continually relevant. There is always a new generation there to pick them up and their music will always endure.”

How do you go about that in terms of marketing and promotion?

“Marketing will obviously complement the product, but I think the point of curation is more to do with the product itself. Just before Peter Green unfortunately passed away, we had just announced the box set to represent that ’69 to ’74 era, because those albums don't necessarily sit alongside Rumours and Tango In The Night. So, from a physical point of view, there's obviously a curation job to be done there to give people what they want in the way that they want it.

“Similarly within streaming, whether it's tour playlists, era-based playlists or band member specific playlists, that curation is really important. You don't want a listening experience that jars too much and jumps around too much. It needs to have a theme and a mood, which we know is the basis of many playlists and why they are so successful.”

What are your hopes for the latest box sets?

“It’s an area of the catalogue we haven't necessarily touched on as often. But these are long out of print records, and the reason we do it in this way is because it fits the type of music and the type of audience we have for a particular era. When we do Rumours, when we do Tango In The Night, when we do Mirage, we do the four or five disc super deluxe editions. This era won't necessarily get that kind of treatment. But it will be still very welcomed by the fanbase.”

Are there more plans for Fleetwood Mac releases?

“Yes, we’ve talked a lot about doing more of the bigger super deluxe box sets, maybe looking at the live sets. The majority of the big albums have been done. But you can't stand still with an act like this. You've got to keep representing it back to the fanbase in new ways. There's always vinyl that can be repressed – as long as you represent the legacy properly.”

We should also acknowledge the staggering sales of Rumours…

“That’s just one of those records where, from a streaming point of view, we'll always do really well. There are four or five really great singles and, as a body of work, it's almost like a greatest hits in itself. Those are the singles played on radio, day-in, day-out. So for the streaming audience, there’s no reason why they won't continue to listen.

“As a vinyl product, it was the third best selling title of 2019. It just has a life of its own, it's so iconic. It can just so easily fit in HMV in the vinyl boxes, as well as Tesco and Sainsbury's in their minimal vinyl section. Even if they hold 20 titles, there's a pretty good chance one of them will be Rumours!”

Despite the growth of vinyl, how much do you factor the continuing decline of physical sales into your plans…

“It’s case by case depending on the type of artist. Fleetwood Mac are one of those acts people love, they want to consume it in all the different ways, whether it's on streaming, physical CD or vinyl. And we want to take it to those fans. But for other artists, maybe we're not going to produce as much physical in the way that we used to; we're only going to produce the right titles rather than having a plethora of different formats. But the demand is very much still there, and D2C is a huge focus for us now because there are still fanbases who want something tangible, they want something special. But it comes back to that quality control, people want to be getting value out of what they're paying for.”

Rhino is nominated in the Catalogue Marketing Campaign at the Music Week Awards.