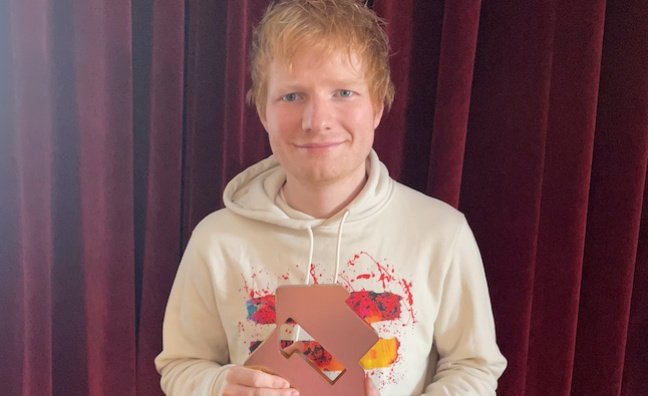 Ed Sheeran has earned his fifth consecutive No.1 album with = (Asylum/Atlantic).

The album outsold the rest of the Top 30 combined and powered Atlantic to weekly market share leadership for the overall albums market. Warner Music and Atlantic were No.1 across albums and singles for Top 75 market shares.

The latest album in Sheeran’s mathematical series, = becomes the biggest weekly seller since his own ÷ LP’s fourth week on the chart in March 2017.

Following No.1 singles Bad Habits, Shivers and new hit Overpass Graffiti, = reached the summit with sales of 139,107. It also comfortably beat the 125,031 total for Sheeran’s No.6 Collaborations Project in July 2019.

Sheeran achieved his latest chart feat with 94,527 physical sales, including 11,644 vinyl copies, 19,294 downloads and streaming-equivalent sales of 25,286. Although impressive, that streaming total was short of the week one impact of ÷ almost five years ago with 78,944 streams and a massive opening total of 671,542.

The Sheeran album’s 100,000-plus sale follows the Coldplay No.1 a fortnight ago with 101,045 copies of Music Of The Spheres. And six-figure sales could be repeated in the next two weeks with albums from ABBA and Adele.

Subscribers can click here for our interview with Ed Sheeran’s manager Stuart Camp.