Sheeran's ÷ conquered - how does No.6 Collaborations Project compare? 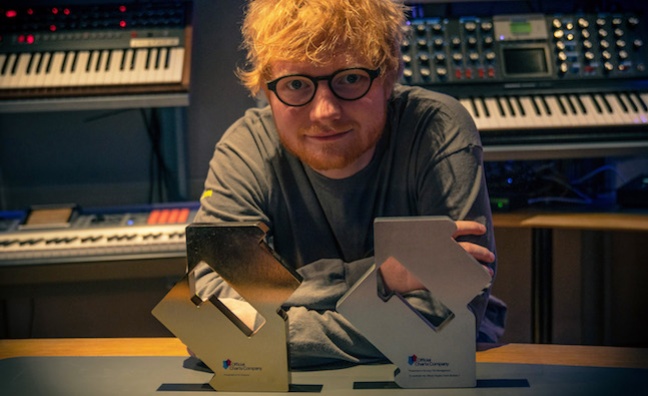 It’s another chart triumph for Ed Sheeran as No.6 Collaborations Project (Asylum/Atlantic) becomes the fastest-selling album of the year.

Sheeran’s No.1 outperformed the rest of the Top 30 combined with first week sales of 125,031, according to the Official Charts Company.

While no one was expecting the record to be as big as ÷, that figure is still below early retail expectations and a long way behind the previous album’s seven-day total of 671,542 (the third biggest opening ever, behind Adele and Oasis).

"It’s always a big event, an Ed Sheeran album,” BPI and BRIT Awards chief executive Geoff Taylor told Music Week. “It’s a slightly different type of album the collaborations project, but it’s streaming very well in terms of the tracks from that album immediately performing well [on DSPs], and we’d expect it to have a global impact again. We’ll all be watching to see how it develops over the next few weeks. There are some great tunes, it may not be as big as ÷, though few things can be. Nonetheless, it’s still a significant moment for the market and encourages more people to get on streaming platforms.”

Speaking to Music Week ahead of the release, Sheeran's manager Stuart Camp, made it clear that No.6 Collaborations Project was going to be very different to a typical Sheeran release.

"We’re not expecting there to be quite the scale [of ÷] on launch but it’s something that will appeal to people," he said. "There’s always going to be an expectation with anything that’s got Ed’s name on it. But we’re not doing promo and this isn’t your usual project. It’s almost a sidestep from the real pressure Ed will feel for following up ÷ when the next record comes out. This is just a slight left turn."

The more interesting result for Sheeran’s label Atlantic – and the industry as a whole, as streaming becomes the norm for LPs – is the performance on DSPs. Despite being such a streaming-friendly record (collaborators include Khalid, Stormzy, Camila Cabello and Justin Bieber), the biggest single contribution was still from physical sales (57,020, 45.6% of the total). Supermarkets, it seems, still play a huge role in an album passing 100,000 sales in week one.

Alongside 18,153 downloads, Sheeran’s streaming-equivalent sales reached 49,858, 39.9% of the total. That’s a big number but not a spectacular streaming share – UK rappers such as Dave and Skepta have recently hit 80% for streams within the overall week one sale. Nevertheless, the strong streaming result was in line with the expectations at Warner Music UK – and as streaming momentum continues, it should become a greater share of the total in the weeks and months ahead.

Speaking ahead of the chart result, Derek Allen, SVP, commercial, said: “Given who the features on the album are, this could well be more streaming-heavy than physical. Although saying that, the numbers that we are looking at, physical will still be a significant part of it and a significant opportunity for those retailers in that space.”

There’s no UK record Sheeran can claim so far with No.6 Collaborations Project, although he does now hold the two biggest first week album streaming results after seeing off a pair of US rivals.

No.6 Collaborations Project has surpassed the week one album streams of 43,811 for Ariana Grande’s Thank U, Next in February; and Sheeran just managed to pass the 49,715 streaming-equivalent week one sales for Drake’s Scorpion a year ago. In terms of the closeness of that result, the Sheeran camp will doubtless point to that album’s 25 tracks, as well as the fact it was not available physically straight away.

Of course, the biggest week one DSP tally for an album is ÷  in March 2017, which opened with 78,944 streaming-equivalent sales. That was just 12% of the total, so Sheeran has successfully grown the proportion of streams for an album that’s not even part of the +, X, ÷ sequence and received no real promotion from the singer-songwriter.

However, in terms of DSP-led growth, it’s worth noting that Drake’s 2016 album Views opened with 12,232 streaming-equivalent sales (15.6% of the total). Just over two years later, Drake had increased his week one streaming proportion to 78%. Admittedly, that was without a physical release, but it was ultimately in line with rap albums from Post Malone, Skepta and Dave that did get simultaneous physical releases.

Sheeran can’t beat his ÷ record in the singles chart with all but one of the Top 15 (The Chainsmokers & Coldplay’s Something Just Like This was squatting at No.7), because the rules subsequently changed to prevent such streaming-led dominance by only allowing three tracks to officially register. According to Official Charts Company raw data, in this week’s singles chart Sheeran would have had eight tracks in the Top 10 and all 15 in the Top 30 – not quite the chart assault of ÷’s tracks. Khalid collaboration Beautiful People rises to No.1, though Shawn Mendes and Camila Cabello take second place.

So, with No.6 Collaborations Project, Sheeran hasn’t suddenly become a pure streaming artist, even if he has probably brought in a younger audience via DSPs. Given the annual growth in UK streaming numbers since ÷ (33.5% year-on-year growth in audio streams in 2018, according to the BPI), there’s a case for saying that No.6 Collaborations Project perhaps should have surpassed Sheeran’s own record.

However, Spotify has reported that the low-key campaign has still ensured that Sheeran has broken the record for monthly listeners and is on course to hit 70m (impressive, given that Spotify’s total number of users is 217m). But the DSP has also confirmed that the first day’s streams for No.6 Collaborations Project were almost 10m behind those of ÷ (46.5m versus 56m). Again, given the growth of Spotify in that two-year period –  it had 132m users in March 2017 – you can make the case that Sheeran’s LP crammed with streaming acts might have racked up bigger numbers.

But with Apple Music reportedly ahead of Spotify in the US, the huge streaming market could yet show a stronger performance for Sheeran on DSPs when No.6 Collaborations Project hits No.1 in the Top 200.

The twist is that ÷ gets another chart boost, up 9-7. Its sales to date now stand at a whopping 3,351,384, with streams approaching 1m equivalent sales (961,830, 28.7% of the total). Even if Sheeran wasn’t expected to top that with his collaborations project, he’s set himself a monumental task with the official follow-up to ÷…