'There's a hell of a lot of excitement': Ed Sheeran's manager Stuart Camp on the No.6 Collaborations Project 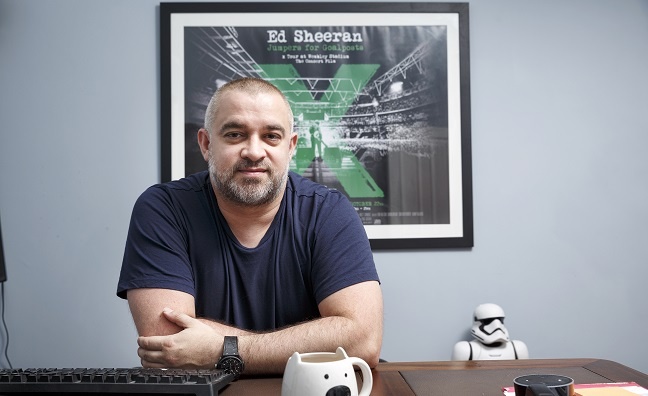 It’s here! Ed Sheeran’s No.6 Collaborations Project (Asylum/Atlantic) dropped at midnight and is already busting blocks everywhere. The album shot straight to No.1 on iTunes and Apple Music and is pretty much nailed-on to post the year’s biggest week one sale next Friday (an accolade currently held by Lewis Capaldi’s Divinely Uninspired To A Hellish Extent, which debuted with 89,506 sales in May).

Last time out, Sheeran made that look modest, with ÷ scoring the third highest debut week of all time with 671,542, according to the Official Charts Company.

Relative expectations for the No.6 Collaborations Project – which features tracks with other artists rather than regular Sheeran solo songs – are being played down, but retailers still say it will do brisk business and Atlantic president Ben Cook told Music Week he expects the record to “deliver strong numbers”.

So what of Sheeran’s manager? Stuart Camp of Grumpy Old Management has helped take the singer-songwriter from small gigs to global superstardom and, with Sheeran still on the record-breaking ÷ tour and unable to do promotion, Camp has been on a worldwide jaunt of his own, presenting the album in multiple international territories.

So who better to tell us what to expect from another hotly-anticipated Sheeran campaign? Camp, Music Week Awards Manager Of The Year winner in 2018, took time out from the busiest schedule in management to talk us exclusively through it all…

How has the album been received so far?
“There’s a hell of a lot of excitement. Everyone has different favourite tracks, which is always interesting. They’re very excited, it’s a very good, strong record. It’s probably got more of what we’d normally say are traditional singles than any other Ed album. Usually you’re picking between two and three to be your first big single, but on this record there’s genuinely six or seven that could be singles. That’s a nice problem to have! There are some absolute bangers basically and we’re every proud of it.”

The singles so far have done pretty well…
“I Don’t Care has done eight weeks at No.1, that’s the record for the year which is good. It’s performed really strongly, so we’re really chuffed with that and we’ve done a decent job of showing there’s more diversity [on the record]. We didn’t want people to have the impression that it’s just straightahead, normal-style Ed Sheeran songs, because the whole purpose of this record is to try and do something different while we could.”

Why did Ed want to do a collaborations album?
“We did the No.5 Collaborations Project EP that actually got us signed, when [then Atlantic boss] Max Lousada saw it at No.1 on iTunes in 2011! Every nine or 10 years we like to scare Max a bit, so we thought we’d do another one! We’ve come back off such a massive album and such a big tour, we’ll have been on the road for almost three years by the time we finish. So it all started off as a pet project. Ed likes recording and working with other people. And it just happened by accident or design. We based ourselves in Nashville last year, Ed started working with all these different people and they just formed the idea that this is what it should be and we should do it now, towards the end of the tour. It was so we had something out to give us a little bit of refresh and to give him something to focus on, before we probably disappear again for another year or so once the ÷ campaign finishes. We never do collaborations on the main Ed albums so, as soon as the first couple of songs started, there was a flow and, before you know it, there’s 15 songs and they’re all really strong and suddenly you have a record!”

Was the location the reason for the number of US artists on the record?
“Yes. It was a conscious decision. No.5 was very Anglo based and the way this one has come out is just because of where we were. We still have Dave and Stormzy and Ella Mai on the record but it’s purely down to geography and logistics.”

How are you expecting the album to perform?
“The market’s moved a little bit, but this is a very different record to ÷. There will be a general appeal to the hardcore fanbase, but we’re opening it up a bit to a younger audience as well. We’re not expecting there to be quite the scale [of ÷] on launch but it’s something that will appeal to people. We’re very confident. There’s always going to be an expectation with anything that’s got Ed’s name on it. But we’re not doing promo and this isn’t your usual project. It’s almost a sidestep from the real pressure Ed will feel for following up ÷ when the next record comes out. This is just a slight left turn. But everyone’s always going to be expecting big things.”

So there really won’t be any promotion?
“No. Unfortunately we’re in this position because we’re on the tour and, if we did one thing for anybody we’d have to do it for them all. We don’t want to upset anybody, so we’re just giving a fair, blanket ‘no’ to everything. On the next album, we’ll travel the world for four months doing everything going. But we’re just not in the position where we can with this record. So everybody’s finding alternative ways to present it without Ed being personally, directly involved. It’s an interesting challenge, but it’s the way it has to be.”

How long will the campaign last?
“There will be songs that we’ll probably push after the release and there’s a chance we’ll release a completely different single nearer to Christmas and that will be the final send off. But this is not an elongated campaign, that’s for sure.”

And will Ed then take another break?
“I think so. There might be some releases next year because a lot of the people we’ve worked with on this record would like something in return, so they may materialise in some form or other over the next year or so. But I don’t think we’ll see another proper Ed Sheeran record until 2021. Everyone needs to live their life a little and recharge their batteries. He did that very effectively last time, he disappeared to Japan for three months. But now he’s screwed that up by being successful in Japan, so he’ll have to find somewhere else!”