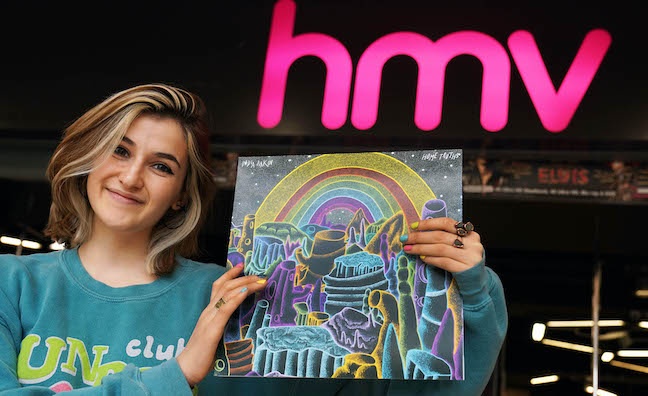 HMV’s grassroots gigs programme was highlighted by Music Week three years ago. It opened up in-stores to local acts in addition to major artists.

Now that initiative has led to the launch of a label, 1921 Records, with Newcastle singer-songwriter India Arkin as the debut signing.

More than 100 gigs are set to take place at HMV stores across the UK for National Album Day (Saturday, October 15). Since the start of the year, more than 1,000 grassroots gigs have taken place at the retailer’s stores through its HMV Live & Local programme.

HMV’s label harks back to the shop’s roots and its centenary celebrations, with 1921 being the year that The Gramophone Company opened His Master’s Voice on London’s Oxford Street. Ten years later, the company would join with Columbia Gramophone Company to form Electric and Musical Industries – more commonly known as EMI.

India Arkin was picked as the label’s first signing after staff saw her perform at the HMV shop in Newcastle. The 22-year-old singer-songwriter, originally from Bath, balances writing and performing music with studying Fine Art at the University of Newcastle.

Home Truths will go on sale exclusively on vinyl in HMV stores across the UK on October 15 - and in-store promotion could help in terms of a chart placing.

Since the start of this year, HMV has opened nine new stores, with three more to come before Christmas. Each of the new shops comes with a renewed focus on vinyl and fan-based pop culture.

Doug Putman, owner of HMV, said: “India’s music is absolutely incredible and we’re thrilled to make her our first 1921 Records signing. She has such passion for her craft, and she’s a true musician who writes, plays instruments and performs.

“We’re really proud of our HMV Live & Local programme, which sees artists like India given the same platform as the international artists who come to our stores, like Charli XCX and Yungblud. India’s performances in Newcastle got rave reviews from our staff and led to her being signed today.”

Putman added: “With our new label, we want to do what we can to help debut artists make their mark in a tough industry. Streaming algorithms mean it’s hard for new artists to get their voices heard, so we’re giving them the chance to get their albums in our stores where music fans can discover them for themselves.

“This is just the beginning for 1921 Records – it’s our mission to get more fantastic albums by debut artists into the homes of music fans. HMV is leading the way in the vinyl revival, so it makes sense for us to create our own label and promote the music we know our shoppers care about.”

India Arkin said: “I’m thrilled to be releasing my debut album with 1921 Records, and it’s almost unbelievable that gigs in the store in HMV Newcastle would lead to this. I can’t wait to see my record on the shelves and tour the country performing with my band.”