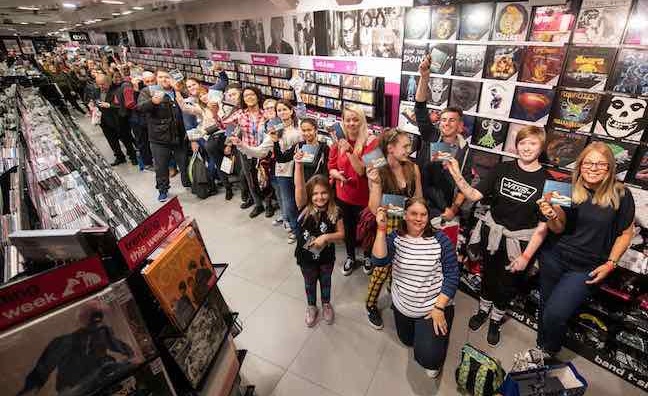 HMV has been busy since Doug Putman took over the business earlier this year.

As well as a major vinyl expansion plan – revealed in Music Week – the chain is relaunching its website to drive pre-orders and has big ambitions for increasing in-store performances.

But it’s not all about the artists targeting a big first week sale by greeting queues of fans at stores around the country. Developing artists and unsigned bands are now being invited to perform at their local HMV, if they have physical product to sell off the back of any in-store activity.

HMV head of music, John Hirst, confirmed that its in-stores will now go beyond the big names.

“We’re opening up to a lot more local artists as well, it’s about creating events in store particularly at the weekends,” he said. “So we’ve opened up to local artists and we’ve relaxed our rules on stocking local artists’ products, so local acts can drop into their nearest HMV and get their stock on the shelf in there.”

The move is in line with the chain’s ambitions to restore its specialist credentials and create a music retail community hub, similar to Putman’s Sunrise Records in Canada.

“We’re doing a lot more of that,” said Hirst. “We used to be really good at that back in the day, but we had to move away from it in the wake of the previous administration. We’re really embracing that again, it’s something Sunrise in Canada do an awful lot of. So if somebody wants to come in, play a few songs and flog 20 CDs we’ve got the ability to do that for them now at the weekends.”

Weekday activity will be reserved for more established acts and album launches.

“We’re certainly giving that a big push,” said Hirst. “We did about 250 in-stores last year, we want to get that up to more like a thousand this year, which sounds ridiculous but it’s only 10 per store over the course of the year.”

The in-store approach has paid off for hard-working acts. Partisan MD Zena White recently noted that Idles played 14 in-stores in the week of their sophomore album campaign.

“The benefits beyond selling an extra 100 CDs are that it’s creating content and creating an online buzz,” Hirst added. “The PR value can’t be overestimated.”