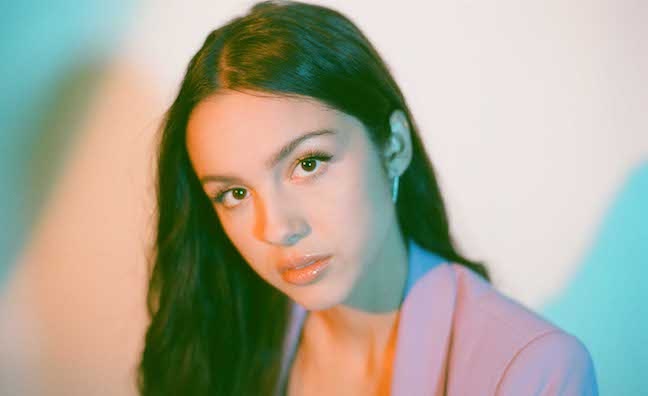 Olivia Rodrigo has started the year by breaking streaming records.

The rising star has debuted at No.1 in the UK singles chart with Drivers License (Polydor/Geffen). Billed as the singer, songwriter and actor’s debut original single, Drivers License entered the chart at the top with 94,770 chart sales, including 10,873,117 audio and video streams across the week. Just three non-festive tracks have previously beaten that weekly streaming total.

According to Official Charts Company data, the track set an all-new record as it surpassed Ed Sheeran’s Shape Of You to claim the UK’s highest number of streams ever in a single day for a non-Christmas song. Drivers License racked up almost 2.407m streams in 24 hours on Tuesday (January 12). Shape Of You previously held the 24-hour record in 2017 with 2.274m streams.

Drivers License also had the biggest opening week of overall chart sales for a No.1 debut single in nearly five years, since Zayn’s Pillowtalk in February 2016. At 17 years and 11 months, Olivia Rodrigo is the youngest solo female artist to land a No.1 hit since Lorde in 2013.

The single has set a global record for the most one-day streams on Spotify for a non-holiday song. It had over 15.17 million global streams on Janurary 11, then broke its own record with 17.01m streams the following day.

Drivers License is No.1 on the Spotify UK, US and global charts. It also made No.1 on Apple Music and iTunes in both the US and UK.

Olivia Rodrigo has broken streaming records - how did you make such an impact with the single in the UK immediately upon release?

“We primed the release with our partners and had the video asset (which is excellent) before Christmas – so everyone knew it was coming the first week back. It was then the first thing we reminded everyone of post-Christmas – so it got the focus before the year really kicked in. The level of support we have had from all partners is A-plus.

“Olivia has an audience already through socials and her High School Musical success. I don’t think anyone could have predicted that the fanbase was so vast and the track would charge this quickly, but it boils down to an excellent song with an artist who knows how to talk to their audience.”

It's the first big new hit of 2021 - how can you maintain momentum on this track?

“Radio are on board – we got Radio 1 and Capital this week – it’s hard to deny a track that flies in at No.1 and breaks records as a debut. It’s also just an excellent track and perfect for UK radio – so this is just the start.”

What are the plans for her this year – and what can you do in terms of promo during the pandemic?

“There will be much more to come from Olivia this year and we are getting into the promo now, since a lot of requests have come in as you can imagine. So much can be done remotely now and even though she is in LA we can get good facetime – I think everyone is used to doing the Zoom promo now.

“The skill is going to be making sure we hold moments back and space them throughout the year, so that we keep this momentum up. It’s been a very exciting week – so we need to keep that feeling up.”