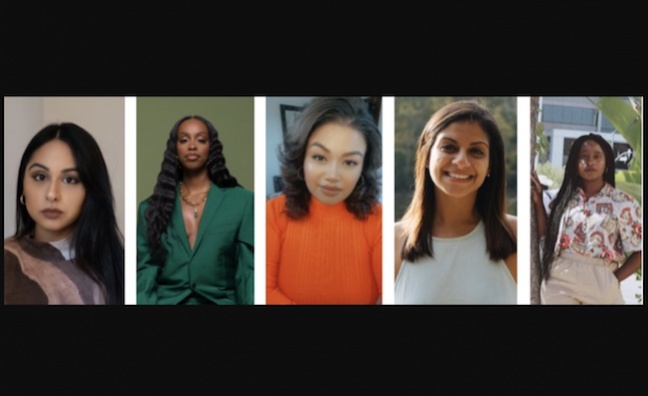 Atlanta-based label Love Renaissance (LVRN) has strengthened its female leadership within the company with a series of appointments.

As exclusively revealed by Music Week, Amal Noor has joined LVRN as senior director of A&R and manager.

LVRN has also promoted Aaliyah Lambert to marketing manager, while Jessica Rodriguez has been upped to artist manager and still maintains the role of chief of staff.

“Since we founded LVRN, it has always been intentional for us to realise that diversity and inclusion are important and to make sure that we’re placing women in positions at an executive level,” said LVRN co-founder and president Tunde Balogun. “It is our mission to strive and change the way the music industry currently functions.”

During her time at Vevo, Priya Minhas produced and directed original content with both emerging and established artists such as Billie Eilish, Yungblud, Doja Cat and Ella Mai.

“LVRN has always been known for our ingenuity and creativeness and with the addition of Priya, who's a powerhouse creative herself, there's no telling what heights we can achieve in the future,” said LVRN co-founder and creative director Carlon Ramong.

Stephanie Gaber was previously at Q Prime, where she started in the radio promotion department and eventually moved into marketing, brand partnerships and sync at the company. At Q Prime, she worked with Metallica, Muse, The Regrettes, Declan McKenna, The Black Keys, and others.

“I’m excited to join the rock star team at LVRN and work on their roster of stellar artists,” said Stephanie Gaber.

LVRN’s co-founder and head of marketing & brand Partnerships, Sean Famoso, said: “I’m really ecstatic to have Stephanie over at LVRN with us, her fresh point of view, resourcefulness and work ethic is just what we could use more of over here!”

"Watching Amal manoeuvre around creatives and her ability to have such a clear vision is a very rare trait,” said LVRN co-founder and head of A&R Justice Baiden. “In an attempt to build the best team in the world, a player like her is one you truly need. I'm excited for her growth and what's to come.”

Jessica Rodriguez joined LVRN as the label’s chief of staff in May 2019. Recently promoted to artist manager, Rodriguez has worked on various projects, such as the relaunch of 6lack’s 600 degrees Hot Sauce and Summer Walker’s Over It album and Life On Earth EP.

“When I first met with Tunde in our initial conversations, he spoke about the innovative and forward thinking activations the company was going to spearhead,” said Jessica Rodriguez. “The most impactful statement that resonated was he wanted to empower and bring on strong women executives which reassured me that LVRN was the company I wanted to call home. Not only have I been placed in a position to lead, but the five executives have taught me through hands-on experience.”

“Jess has been an important part of the company since the day she was hired and walked into our lives. She is one of the strongest support systems for the company,” said Tunde Balogun. “We are very excited for her growth as she is a true leader for the whole staff and company. She is a model of what we want our executives to grow into and she is well-deserved of all of the attention and recognition that she is getting right now.”

Recently promoted from marketing & management executive assistant, Aaliyah Lambert supports the president of the label and the head of marketing and brand partnerships on various projects.

“Over the last few months, I’ve learned a lot working under Tunde, Sean and the innovative team at LVRN,” said Aaliyah Lambert. “I’m excited about the upcoming releases, activations and the onboarding of women executives to the team. I look forward to the professional growth that will come from this new role.”

“Aaliyah’s drive, passion, hard work and determination is very impressive to have watched in the few months she has been with us,” said Tunde Balogun. “In less than a year, she has already risen to the top of the company and is well deserving of this big promotion. I’m very excited to see her growth and trajectory as she continues her journey with us.”

As revealed in Music Week’s LVRN feature, the company has established a department dedicated to offering free, in-house therapy services to the entire staff.

Subscribers can click here to read the full interview with LVRN’s co-founders.