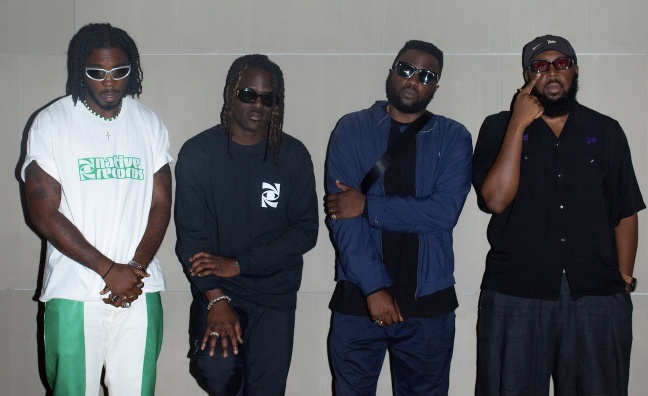 The team behind Native Records have told Music Week that their new label JV with Def Jam Recordings will be a home for a diverse array of new talent with a “fluid” approach to genre.

Music Week revealed the partnership between Native and Def Jam, which marks the first time an African business has teamed up with the major, in our October issue, which is out today (September 20).

Native co-founders and co-presidents Seni ‘Chubbz’ Saraki and Teni ‘Teezee’ Zaccheaus are joined by COO Sholz Fagbemi and Def Jam president Tunji Balogun in our interview, which explores the history of multi-platform music company Native and the story behind its new label arm.

“It’s just such a historic label, whether we are talking all the way back to Rick Rubin and then, of course, Jay-Z, Ne-Yo, Rihanna, Rick Ross and artists like that,” said Saraki of the partnership with Def Jam. “Tunji is someone whose work speaks for itself. He’s just been a massive factor in the US and so instrumental in the journeys of artists like Wizkid and Tems. He is someone who is completely driven by what he hears and not necessarily trends, data and numbers.”

He added that the UK will be a particular focus for Native Records, where the team have been in conversation with 0207 Def Jam co-presidents Alec and Alex Boateng.

“You can’t ignore the UK as it is almost like the first stop for a lot of African music once it leaves the continent,” he said. “For us it’s not necessarily about where the artist is from. It’s more if the music really connects with and fits what we’re trying to build.”

Balogun commented: “We’re trying to build a culture that connects the best in Black music, from hip-hop, R&B and reggae to Afrobeats, UK drill, house and, basically, everything currently happening in the diaspora. I happen to think that some of the best, most vital and cutting edge new artists and sounds in music today are coming out of the African continent, and the Native crew have their fingers on the pulse of what’s truly happening in that scene. I’ve been connected to the guys for some time and I believe that we’re going to discover and develop some amazing talent together.”

Zaccheaus who, as Teezee, has collaborated with artists including Skepta, Kid Cudi, Davido and Tems, added: “The beauty we have is that the artist community really trusts us because we are creatives and we get it. I think they also trust us because even though we are creatives and I’m an artist, it’s never been about platforming our own music or agendas first. We want to give people the opportunity before the global community does it, and that’s been our M.O. since we started.”

Tunji Balogun is completely driven by what he hears and not necessarily trends, data and numbers

Fagbemi told Music Week: “We’ve already built an audience and the music [we like] is just an organic output of that audience. We believe that no one is really speaking to that audience because it cuts across the continent, it is such a multicultural group that’s not really being served. There’s a group of people who want to listen to Fireboy DML, 21 Savage and Brent Faiyaz all at the same time, and all at the same venue. So we’ve just been trying to create that space where people who don’t really fit into any category can enjoy music.”

Native runs an online editorial platform and quarterly print magazine, plus an annual music festival and a growing DJ collective. It has played a key role in helping to build a new generation of superstars, showing early support for Wizkid, Tems and many more. The NativeLand festival has hosted UK rappers including Skepta, Dave and J Hus, among others.

Read the full interview in the new issue of Music Week, out now.