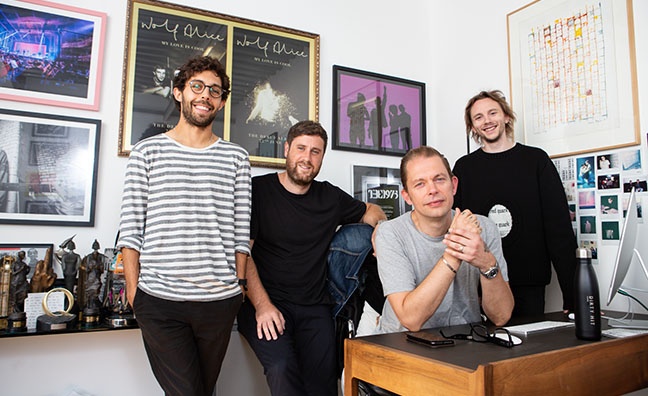 Dirty Hit founder Jamie Oborne has told Music Week the label will “led by example” in the music industry’s fight against climate change.

The conversation, available for subscribers to read in full online here, ranged from The 1975’s progress with Notes On A Conditional Form and Wolf Alice’s Mercury Prize success, to the West London indie label’s A&R policy and stance on nurturing creativity. But the team stressed the urgent importance of their campaign for a more sustainable music business, which kicked in earlier this year.

“As a label, we’re auditing everything we’re doing top to bottom,” said Blow. “Biodegradable shrinkwrap, cutting out single use plastics, in the office everyone’s got their own Dirty Hit water bottle,140 gram vinyl instead of heavyweight vinyl, no more jewel case CDs, just softpack cardboard, the office is running on renewable electricity, there’s the merch incentive… It’s finding the most sustainable options.”

The label has also issued road crew with Dirty Hit water bottles and has launched a campaign to revolutionise touring.

“We’re not going to have touring sorted out overnight, it’s going to take fucking ages to be honest with you,” Oborne said. “All the cards are stacked against us from the start, but I’d rather sort out 50% of it than be another person who stands around saying, ‘Oh, we can't sort it at the moment because no one else is sorting it for us’.”

Oborne, who founded All On Red Management alongside the label, called out anyone “in the world who is waiting for people to do something before they can legitimately do it themselves”.

“Pretty soon, it’s going to be too late to change it,” he said. “My bigger motivation is my two young kids. I’m doing it for them more than any sort of industry fucking kudos.”

He said The 1975's work with activist Greta Thunberg, who features on a track from Notes On A Conditional Form, "finally made the penny drop" in his mind. "I forgot my own selfish desires," he said. "When you start reading up on this stuff it’s pretty harrowing."

Dirty Hit is involved in Music Declares Emergency alongside a large list of companies and artists including AIM, BPI, Warner Chappell, AEG, The 1975, The xx and many more. Blow acknowledged that, “As an industry, everyone’s looking at it [the environment].

However, the GM stressed the need for the business to “change as a whole”. He used the example of shrinkwrapping vinyl records to illustrate the difficulties the business is facing.

We’re not going to have touring sorted out overnight

Caldwell said Dirty Hit is seeking to “force the hand” of those in power.

“It’s important that the small changes force the hand of the people who can make the big changes,” he said. “If we stop using jewel cases and then more and more labels do too, the demand reduces to the point where it’s not an effective business model to make them anymore. If everyone goes, ‘Well they’re still going to make them anyway, so I’m not going to bother, then nothing will happen.”

Read the full interview in the new issue of Music Week. Subscribers can click here to read the interview in full online. To subscribe and never miss a music biz story, click here.