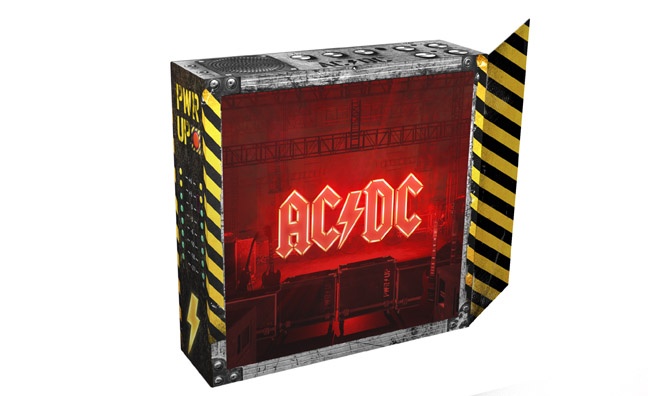 You may not know the name Josh Cheuse, but it’s more than likely you know his work. In his storied career, Cheuse, communications creative director, Sony Music Entertainment, has worked with the revered likes of Beastie Boys, Bob Dylan, The Clash, Run-DMC, Big Audio Dynamite and AC/DC.

And when it comes to his work on the rock titans’ highly-anticipated new album Power Up?

“This is the biggest thing I’ve done,” he told Music Week, proudly in our new issue. “Rock Or Bust was quite big, but this feels bigger. For a band as special as this, my role is to make the physical manifestation of the artist’s vision; it’s like, ‘How do you take the music and make it into a visual thing that honours the group, the fans and excites people?”

The answer Cheuse, AC/DC and Sony reached was to assemble the most impressive physical offering of 2020. Amid the smorgasbord of formats and Power Up bundles, the one attracting the most attention is its Deluxe Box. Retailing at £49.99, the collectible lightbox features an illuminating AC/DC logo (“You can put it on your mantelpiece,” beamed Cheuse), and contains a battery operated two-watt speaker playing a guitar riff/static, a USB wire, CD and 20-page booklet.

Here, in an unread extract of this week’s cover story, Cheuse weighs in on the importance of physical music…

How closely did you work with the band to come up with Power Up’s array of different editions?

Josh Cheuse: “We started going back and forth with some ideas and concepts and whittled it down. Then I went to meet Angus [Young, AC/DC’s lead guitarist] in September last year in Germany with Rob Stringer to put some stuff in front of him, it was a prototype of the deluxe. We were in a hotel boardroom and I had lots of stuff for him to look at. Angus kind of takes it all in and then he'll go and have a smoke and then he'll come back with some really interesting notes and then we'll take it from there.”

It’s all gone down very well. The picture disc is already sold out…

“It's a drag that that's sold out, I think that was actually something where, because of the world situation, we couldn't make more than like, 10,000. And I think the Germans would have taken 10,000 of them [alone]. I love what I do. To be able to do this for a band like AC/DC, and work with this great team at Columbia and Sony, as a corporation, to create a campaign to bring this to the fans and make something for every different price point so that people can have and hold and enjoy… That's a blessing.”

When it came to the deluxe edition with its own lighting, battery and speaker, how difficult was that to bring together logistically?

“Well, the good news is it was done by the same company that did Tool’s [2019 album Fear Inoculum, which included its own speaker and digital screen]. They've been through all that with the battery. Shipping batteries is tricky, but they had done a lot of that research and development part of it. I think it really helped that had done a lot of the research before.”

Album artwork is more important than ever

Some people claim that artwork has become almost pointless in the streaming age, where most people consume artwork in a tiny postage stamp-sized album sleeve on streaming platforms. How important is artwork to an artist right now in 2020 in your mind?

“I'm not just saying this because I'm a creative director, it's a very, very important part of the campaign. It always has been. People want to see the groups, they want to see the whites of their eyes. For me, I try to just be malleable in the sense that there’s a whole new palette now – I have to make all these digital teasers, little films, things that appear on Instagram, and Facebook, and the photographs that I take end up as a hero photo on Amazon, Spotify, iTunes, Apple, there's so many different little widgets that you need to make. And they become billboards. You create this thing, you put it out in the world, and it just goes. So I think, album artwork’s more important than ever.”

Artwork certainly has more spaces to live in these days…

“Yeah, before you just did an LP cover, and an inner sleeve. And the campaign was you do some ads and a poster, and then you were done and you would move on. Now, every day I'm working on new content pieces, fan engagement, merchandise, websites, all of these things. Really my role in the team is to make sure that all these things marry up and have some kind of continuity across the whole campaign, and I think people start seeing that. I'm exhausted because I'm running on New York time and Australian time!”