'Thank you for being our champion': The major labels' global bosses on what Music Week's 60th anniversary means to them 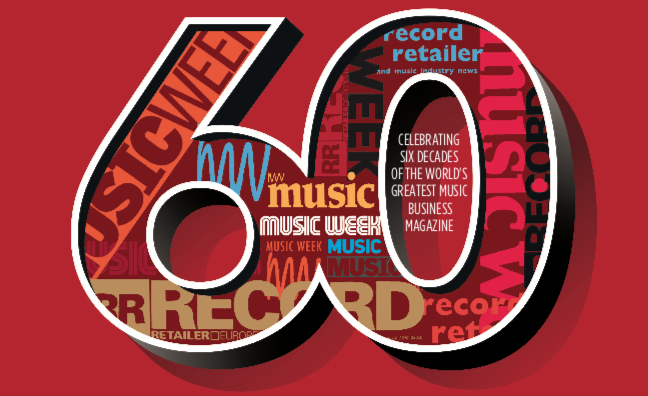 In case you haven’t noticed, Music Week has just turned 60. This week’s special 60th Anniversary edition hit desks across the international music industry yesterday; a host of top execs came out to party last night at our 60th birthday drinks at the Sanctum Hotel in Soho; and social media has been awash with readers telling the world what the magazine means to them.

This week’s issue features dozens of big names from across all sectors of the industry picking their favourite career moments, as told in the pages of Music Week magazine. Everyone from Simon Cowell to Kanya King to Lyor Cohen and Joyce Smyth share their memories of appearing in the world’s greatest music business publication.

And to give you an idea of our reach, the execs running the three major labels globally all contributed. Sir Lucian Grainge (chairman and CEO of Universal Music Group), Rob Stringer (CEO of Sony Music Group) and Max Lousada (CEO, recorded music, Warner Music Group/chairman & CEO, Warner Music UK) are all Brits of course, meaning they grew up in the pages of Music Week.

All three have also won our Strat Award – the highest honour in the UK music biz – and remain regulars in our pages. And all three took the time to speak about their long relationship with the music industry ‘bible’.

“One of my first jobs in the music business was working in the creative department at April Music,” said Sir Lucian. “It was the late ‘70s and there were three of us in the department. We used to share one copy of Music Week and lunchtime on Tuesdays was my designated slot when I could get my hands on the latest issue. Our offices were on Greek Street in Soho, and there was a greasy spoon around the corner called the Star Café. It was there, over beans on toast and a pot of tea, that I would read Music Week cover-to-cover. In those days, I was particularly obsessed with Dooley’s Diary, which had coverage of every signing, the latest gossip and new hires. It was essential reading for anyone who wanted to know what was really going on in the business.”

Stringer, meanwhile, chose the time he picked up The Strat at the 2014 Music Week Awards as his favourite Music Week moment.

“Not for the personal prestige of that award,” he said, “But because it was Sade who walked out on stage to give me it to me and there was a huge hush in the room, because she still elicits that sort of pure reverence after 35 years of her musical career. I was a huge fan of hers before I joined a record company and will be long after I leave, so it was an honour to be next to her that night.”

And Lousada, who picked up The Strat himself in 2017, spoke passionately about the role Music Week plays on the international scene.

“Music Week shines a spotlight on the creativity and artistry that makes the UK music industry so unique on the global stage,” he said. “Thank you for being our champion.”