'The room can be divided': How the Mercury Prize judging process really works 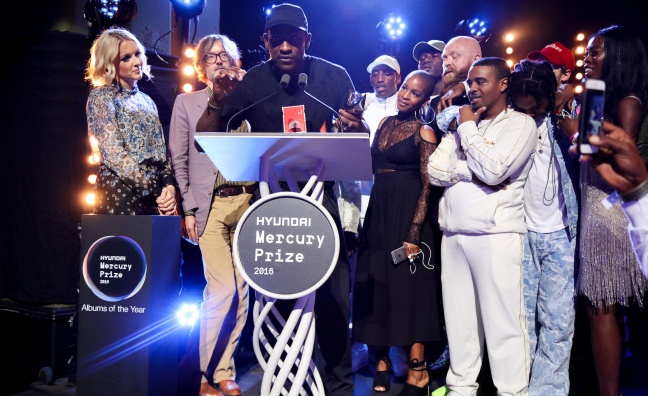 Anyone looking for tension in the music industry could do much worse than knock on the door of the judges’ room at the Hyundai Mercury Prize 2019.

In the new edition of Music Week, we sat down with Mac, Amfo, panel chair Jeff Smith and his predecessor Simon Frith to find out exactly how the process unfolds. They all spoke about 2016's edition when Skepta won (pictured above) as evidence of the closely-fought process.

Where else to start than with the recollections of former critic Frith, who chaired the panel until BBC Radio 2’s Smith took over in 2016?

So, just how thick will the tension be in the room tonight?

“Initially, the feeling is of excitement, no-one knows what's going to happen, even the shortlist discussion is not a good guide to the eventual winner,” Frith said. “And then it gets very intense, especially when the choice gets down to two or three albums.”

You can have the room divided

“You can have the room divided, there can be pockets of particular support and it’s the chair’s job to bring all that together and come to a conclusion that pleases everybody,” he said. “Obviously that’s going to lead to some lively debate and it certainly does. We’re having our dinner, but we’re not concentrating too much on the food! It arouses huge passion and excitement and it’s the way it needs to be, really.”

BBC Radio 1’s Clara Amfo said: “If one person is particularly passionate about a record they will have that final word and so they should, I’d be disappointed if people were like, ‘OK, fine, give it to so and so.’ I like the fact that we have a continuing debate and conversation. I’d be disillusioned in the industry if people didn’t care.”

Her Radio 1 colleague Annie Mac added: “The judging process feels really exciting and important. You’re seeing the artists perform and judging the albums there, so it feels really important to get it right. That meeting is always a bit more passionate and can get a bit heated, in a positive way.”

As for who might emerge triumphant this year, the judges Music Week spoke to all referenced the prevalance of political comment in the shortlist.

Mac called the shortlist a “sign of the times”.

“It’s quite telling when you look at how many albums on there are punk-leaning and political in their own way,” said the DJ “There’s a lot of frustration being channelled through music on these albums. You can hear the political unrest going on.”