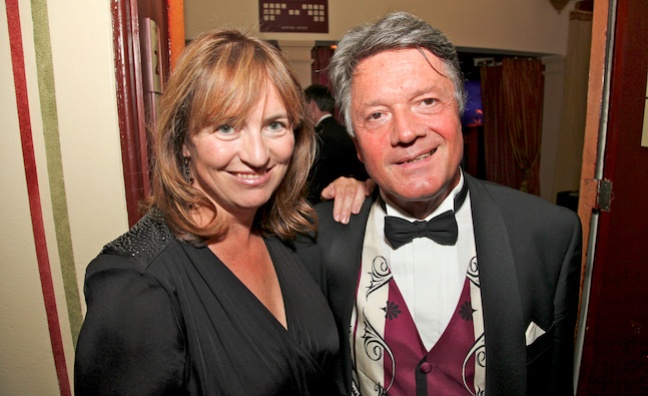 Tributes have been paid to music industry lawyer and former BPI and EMI executive Sara John, who has died aged 62.

Sara John passed away on Saturday (August 14) after a lengthy battle with cancer. She leaves a husband, former PPL CEO & chairman Fran Nevrkla (pictured together at the Classical BRITs in 2011), and two children, Sophie and Tommy.

“It is with great sadness that we share the news that our dear friend Sara John passed away on Saturday morning, surrounded by her family, after a long, brave and courageous battle,” wrote Michelle Emmerson, former EMI human resources SVP and current MD of Blue Monday Consulting, on social media.

“Sara was a force for good. A remarkable lady with a passion for music and an undeniable talent to fight for the causes and policies that she believed in. Sara was a role model for women in the industry, a mentor and a force of nature who will be greatly missed. Our thoughts are with her family; her husband Fran, daughter Sophie and son Tommy at this incredibly sad time. Rest in Peace wonderful Sara.”

Maggie Crowe, BPI director of events and charities, described Sara John as “a true trailblazer in the industry”.

The BPI tweeted: “We join others across the music community in mourning the profound loss of our former colleague Sara John. A wonderful person who inspired those around her, Sara was a great champion of British music and will be greatly missed. Our thoughts are with her family and many friends.”

We join others across the music community in mourning the profound loss of our former colleague Sara John. A wonderful person who inspired those around her, Sara was a great champion of British music and will be greatly missed. Our thoughts are with her family & many friends. pic.twitter.com/KD6uk3GMjw

After studying law at St Anne’s College, Oxford, Sara John spent three years as a lawyer at Clifford Chance, where she represented clients including Pink Floyd. From 1989, she worked at the BPI for eight years as director of legal affairs and handled all contractual relationships with broadcasters, sponsors and artists relating to the BRIT Awards. John lobbied Brussels and Westminster on behalf of the music industry.

From 1997 to 2002, John worked within DCMS as a civil servant within their music policy team. She led on the Blair government’s strategy for the music industry and worked closely with Culture Secretaries Chris Smith and Tessa Jowell.

For her next role, Sara John was appointed as VP, government affairs, Europe at EMI and stayed for four years. During that time, she worked with the senior management team, key executives, managers and artists to develop and lead EMI’s relations with government and policymakers across the EU.

During the last 13 years, Sara John was a specialist adviser to the DCMS Committee, head of policy at the Creative Industries Federation and strategist at the Best For Britain campaign, dealing with the legal and political aspects of the anti-Brexit organisation.

This year she worked as a consultant for Hipgnosis Songs.

A memorial is being organised for industry friends and family. Her family have requested any tributes, memories and details of Sarah John’s achievements to be sent to: Maggie.Crowe@bpi.co.uk

Charitable donations can be sent in Sara John’s name to MacMillan Nurses or Cancer Research.