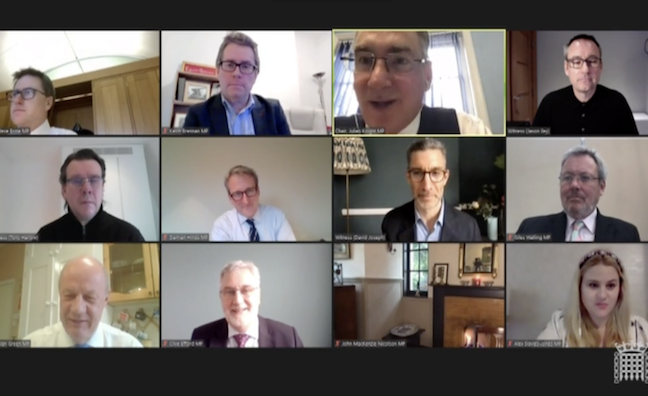 More than seven months after the first evidence session of the DCMS Committee’s inquiry into the economics of streaming, the verdict is in. And perhaps it’s no surprise - given the combative nature of some of the sessions - that the big players in the recorded music industry have come in for criticism.

The committee of MPs has recommended that government ministers should urgently address “fundamental, structural problems within the recorded music industry” with the involvement of the Competition & Markets Authority in a full market study into the majors’ possible dominance.

“Streaming needs a complete reset,” is the report’s conclusion. While the DSPs have largely avoided criticism (although YouTube’s dominance is a concern), the MPs have made clear their concerns about the role of the major labels in the direction of the streaming economy. But the Committee also questioned claims by AIM that direct licensing of DSPs within the indie sector by Merlin had not disadvantaged smaller labels and self-releasing artists.

Artists and songwriters gave compelling evidence during the hearings about the impact of streaming, particularly the financial effect on younger music creators. Despite some efforts by labels and trade bodies such as the BPI to provide an alternative perspective (largely based on the idea of consumer preference), the report calls for comprehensive reform to redress the balance for songwriters, performers and composers and backs a system of equitable remuneration (see below).

But it’s not all bad news for the majors and the BPI. The report does call on the government to introduce robust and legally enforceable obligations to normalise licensing arrangements for UGC-hosting services such as YouTube, in order to address the market distortions and the so-called 'value gap'. There’s also support for extending the Music Export Growth Scheme, administered by the BPI.

Committee chair Julian Knight MP said: “While streaming has brought significant profits to the recorded music industry, the talent behind it - performers, songwriters and composers - are losing out. Only a complete reset of streaming that enshrines in law their rights to a fair share of the earnings will do.

“However, the issues we’ve examined reflect much deeper and more fundamental problems within the structuring of the recorded music industry itself. We have real concerns about the way the market is operating, with platforms like YouTube able to gain an unfair advantage over competitors and the independent music sector struggling to compete against the dominance of the major labels.

“We’ve heard of witnesses being afraid to speak out in case they lose favour with record labels or streaming services. It’s time for the government to order an investigation by the Competition and Markets Authority on the distortions and disparities we’ve uncovered.”

We have real concerns about the way the market is operating

While the report is a serious blow to parts of the UK recorded music industry - and may indeed have repercussions in the weeks and months ahead - it remains to be seen how the government responds to the recommendations.

Here, Music Week analyses the main conclusions of the DCMS Committee inquiry into the economics of streaming…

Not exactly a buzzworthy phrase prior to the inquiry, the #BrokenRecord campaign headed by Tom Gray can claim a victory in getting the committee to back the proposal for equitable remuneration of streaming. However, some persuasive arguments from leading execs such as Warner Music UK’s Tony Harlow during the majors’ evidence session mean that MPs are not suggesting that streaming should be entirely reclassified as being akin to radio rather than a purchase model.

Nevertheless, MPs have come around to the idea that streaming should, like broadcasting, be licensed on a similar 50-50 basis between labels and performers. While accepting that streaming can continue to utilise the ‘making available’ right rather than rental under copyright law, the report says equitable remuneration should still be applied “as a simple yet effective solution to the problems caused by poor remuneration”. 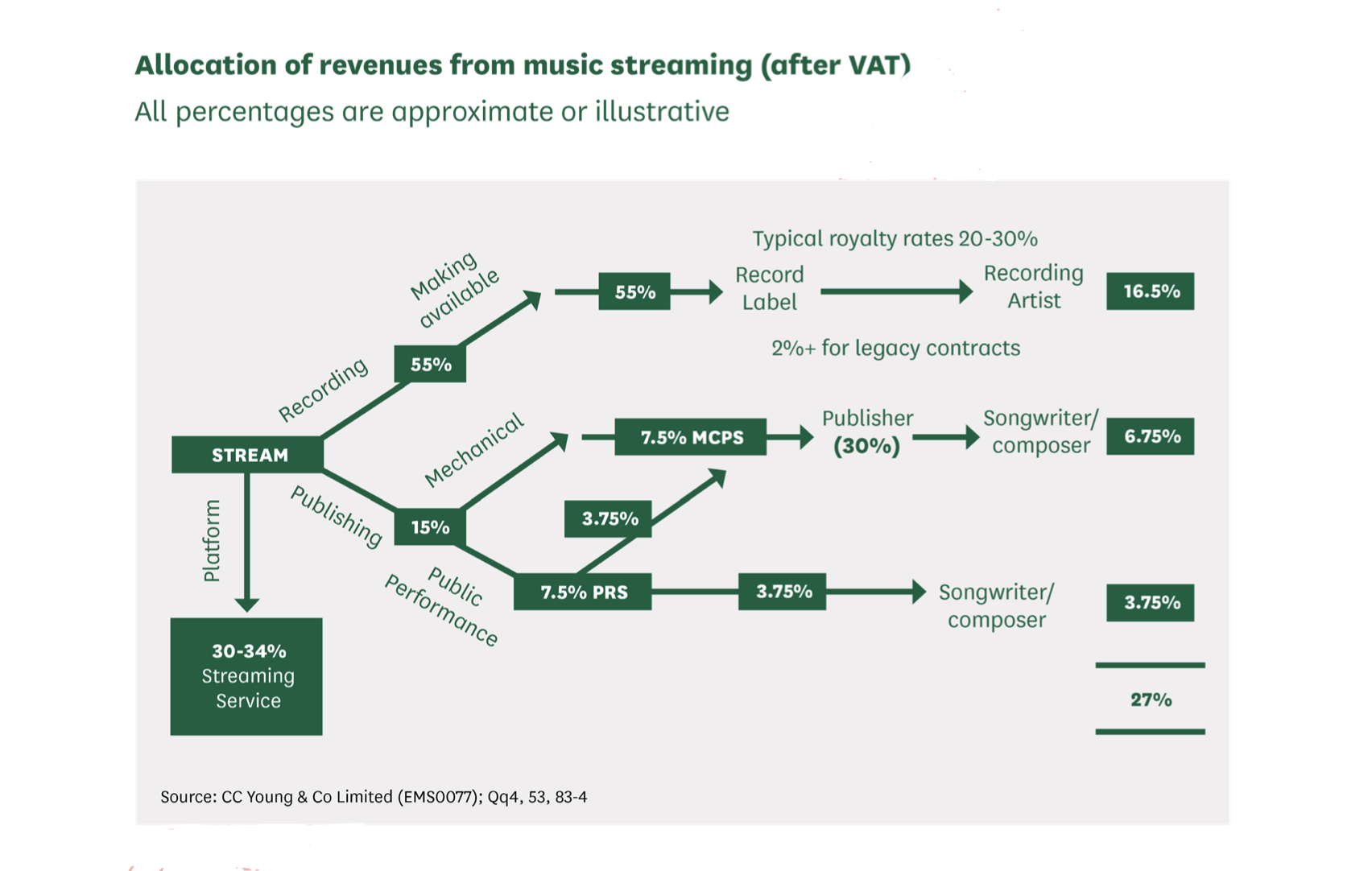 There was some excitement in the reporting of the session featuring Culture Minister Caroline Dinenage, when she suggested that the Competition & Markets Authority could look into the power of the major labels. To Music Week, it sounded more like a statement of the obvious rather than a call to action. But now the government is being urged to do just that.

The report finds a case for a full study by the CMA into the economic impact of the dominance by Universal, Sony and Warner of the UK’s music recording industry, and to a lesser extent in publishing.

“The government must make sure that UK law is not enabling the outcome of market dominance,” stated the report. “This means that independent labels must be supported to challenge the majors’ dominance and creators must be empowered to offset the disparity in negotiating power when signing with music companies.”

Further evidence to support a referral to the CMA comes from “ongoing concerns” about the majors' position in direct licensing negotiations with streaming services which, it suggests, allows them to benefit at the expense of independent labels and self-releasing artists, particularly regarding playlisting.

However, as asserted by the BPI and majors during the sessions, the government may recognise that this is a sector still recovering from the onslaught of piracy - remember that the global market peaked way back in 2001. 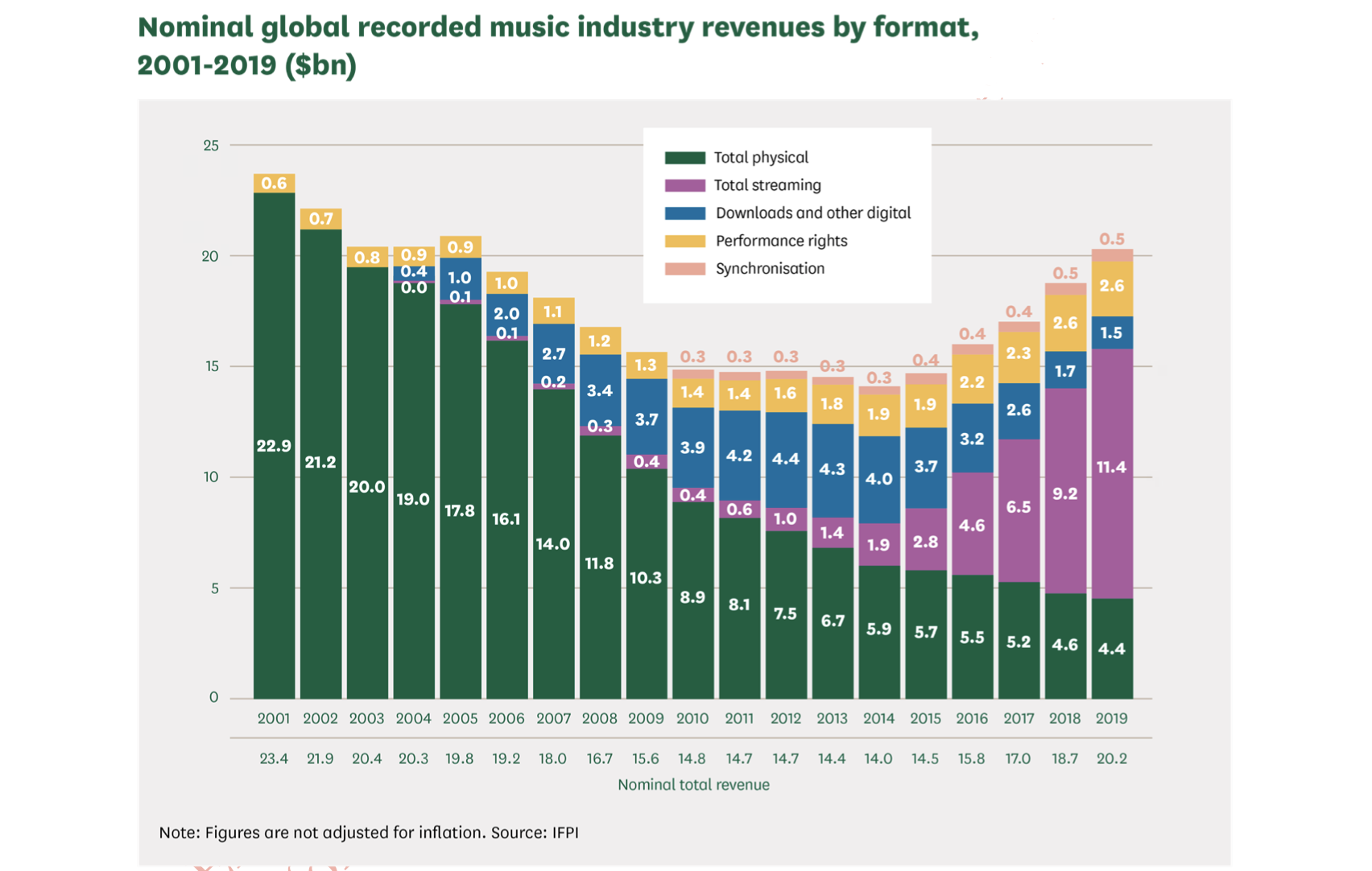 Despite some surprising claims during hearings about money changing hands for prominent playlisting, there was never any conclusive proof of such allegations. Nevertheless, MPs were concerned enough to make recommendations about the issue of pay-for-play and DSPs. Spotify is the clear market leader in audio streaming, according to the report, followed by Apple Music and Amazon Music tussling for second place.

The report noted that performers are “often encouraged to pay for marketing workshops by the platforms”, or for services that pitch to playlist curators or otherwise develop relationships with curators in order to achieve additional promotion through playlisting.

“Music curators play an important role in the discovery and consumption of digital music and are influential in how creators are remunerated,” concluded the report. “It is, therefore, unsurprising that music creators are putting more resources into catching the eye of these curators. Where curators are paid or receive benefits in kind for playlisting, we recommend that they are subject to a code of practice developed by the Advertising Standards Authority, similar to social media influencers, to ensure that the decisions they make are transparent and ethical.” 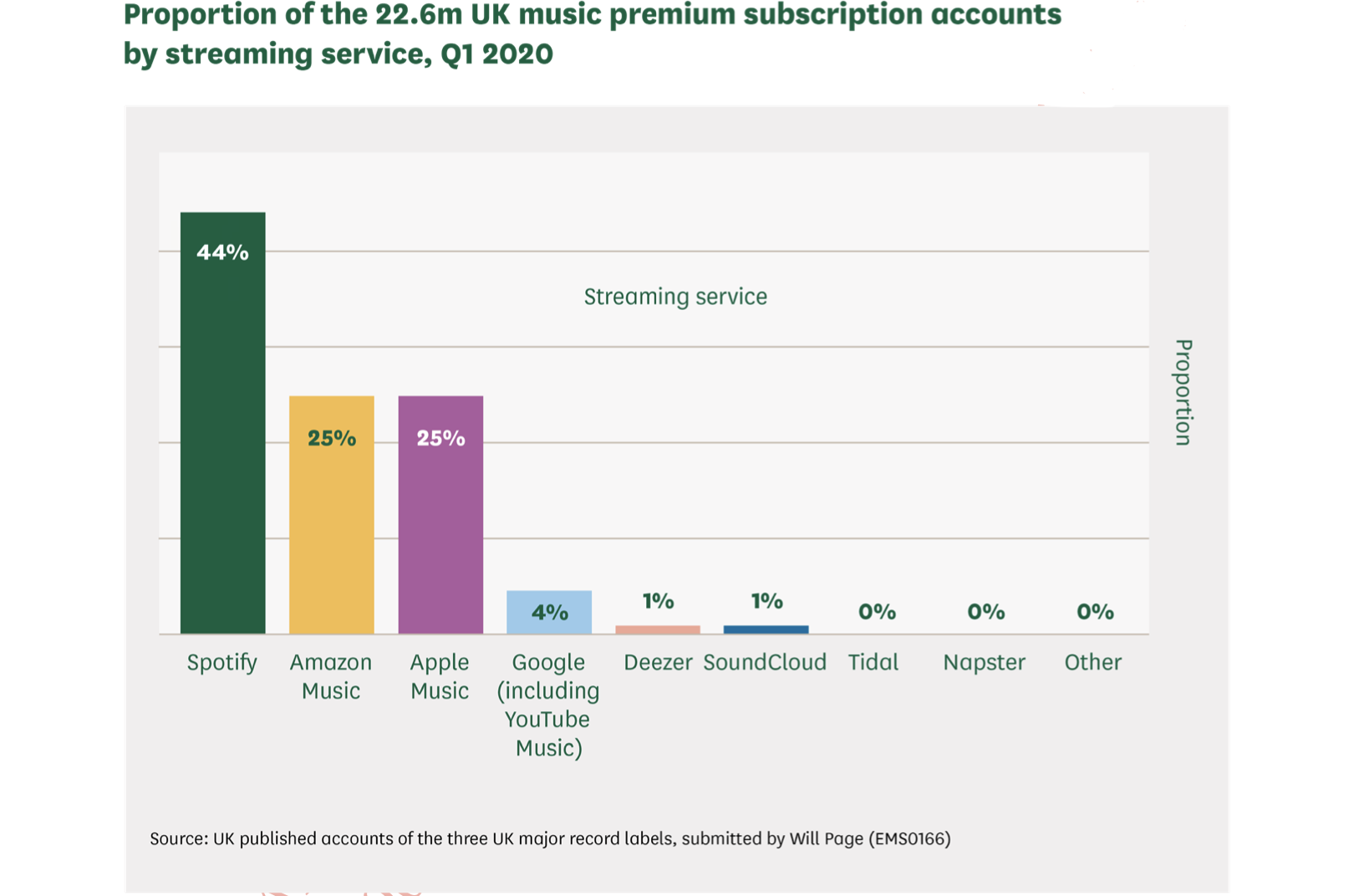 According to the report, performers, songwriters and composers receive only a small portion of streaming revenue due to poor royalty rates and because of the lower valuation of songwriting and composition, compared to the value of a song’s recording. Nadine Shah’s contribution in the opening session set the tone, although her label on previous releases (Infectious/BMG) is generally regarded as paying fair streaming rates.

The report also highlighted the MPA’s contribution to the debate and the role of the majors (members of the trade body) in the publishing sector. “As long as the major record labels also dominate the market for song rights through their publishing operations, it is hard to see whether the song will be valued fairly as a result,” said the report.

Evidence from artists and songwriters who enjoy critical success described earnings from streaming as insufficient to make a living. And when a major artist such as Nile Rodgers took part, he too was persuasive (perhaps even more so because of his relationship with senior industry figures).

“The pitiful returns from music streaming impact the entire creative ecosystem,” stated the report. “Successful, critically acclaimed professional performers are seeing meagre returns from the dominant mode of music consumption. Non-featured performers are frozen out altogether, impacting what should be a viable career in its own right, as well as a critical pipeline for new talent. Those that provide specialist support for creators, either based on commission or working as salaried staff as part of an artist’s business or technical expertise, are also affected, meaning that fewer jobs will be sustained by an otherwise growing sector.”

Some good news for the majors (and DSPs): the report does hit out at safe harbour laws that give services that host user-generated content (UGC) such as YouTube a competitive advantage over other services.

"Safe harbour provisions that have been transposed into UK law have profoundly impacted the market for digital music consumption,” stated the report. “YouTube’s dominance of the music streaming market shows that the market has tipped. Safe harbour gives services that host user-generated content (UGC) a competitive advantage over other services and undermine the music industry’s leverage in licensing negotiations by providing UGC-hosting services with broad limitations of liability. This has suppressed the value of the digital music market both in real and absolute terms even as these services generate multi-billion-dollar advertising revenues.”

For the record, the report accepts the estimation that the UK is the “largest digital music market in Europe and generated approximately $1 billion in revenue in 2020 alone.” However, there are concerns about the long-term impact of the familiar £9.99 price point, partly a result of YouTube’s competitive advantage according to DSP rivals.

“Though streaming has realised price and convenience benefits for recorded music consumers, there are potential consequences for them too if the issues with streaming continue,” stated the report. “Several submissions have noted that there has been a continuous fall in average revenue per user (ARPU) for streaming services and therefore, by virtue of the revenue- share model… the music industry.”

To address a wider imbalance, the report recommends a right to recapture the rights to works after a period of time from record labels, and a right to contract adjustment if an artist’s work was successful beyond the remuneration they received.

Many labels do not write off debts meaning that deals signed decades ago can still recoup against initial production and distribution costs. Sony Music made a big splash with its recent announcement that it would "pay through on existing unrecouped balances to increase the ability of those who qualify to receive more money from uses of their music" for deals before 2000. Some of the big indies already take this approach.

“We urge Universal and Warner to look again at the issue of unrecouped balances with a view to enabling more of their legacy artists to receive payments when their music is streamed,” stated the report.

After much talk of the user-centric system for royalties ahead of the inquiry, it was ultimately a diversion that nobody could quite agree upon. AIM came out against the system, while services such as Deezer and SoundCloud made efforts to switch to user-centric. MPs can clearly see the benefits of considering such a model without yet suggesting it’s a silver bullet for bringing about more fairly distributed streaming royalties.

“The debate between the predominant pro-rata payment model and alternative methodologies such as user-centric has been compelling,” suggested the report. “It is positive that new services are inventing new and creative ways to address creators’ and consumers’ concerns about the fairness and transparency of creator remuneration from streaming. We are concerned, however, that current contractual agreements between the major music companies and streaming services have the potential to stifle further innovation if they are misused. The CMA should consider in its case whether these agreements have the potential to (or indeed have already) prevented experimentation and innovation by streaming services.”

Click here for all of our DCMS streaming inquiry coverage.