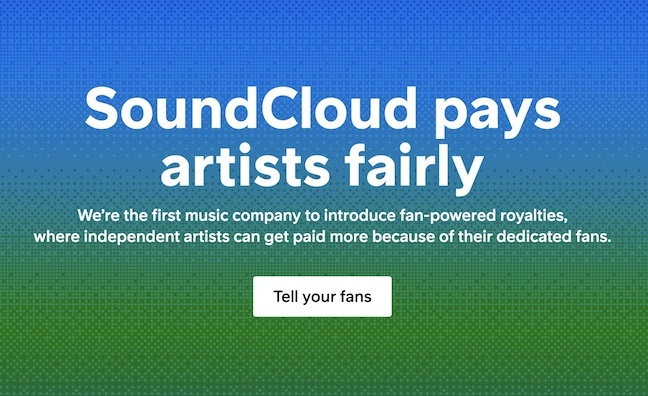 The financial returns for artists in the streaming economy have been hotly debated in recent weeks, as a result of the DCMS Committee inquiry.

SoundCloud, which appeared before MPs on the inquiry, has now announced the introduction of fan-powered royalties, which it describes as a “more equitable and transparent way for emerging and independent artists to earn money on SoundCloud”.

It’s essentially a user-centric payments system, though limited within the independent and emerging artist ecosystem on the streaming platform. SoundCloud confirmed that its licences with majors are unchanged.

During the DCMS Committee inquiry, executives warned that it could be a complicated change to make the switch to user-centric (and, of course, it needs the approval of all licensees).

SoundCloud is making the move from a market share royalties model to a user-centric system for 100,000 independent and emerging artists.

Independent artists monetising directly on SoundCloud based in the UK would see the total amount paid to them collectively increase by 25%, based on SoundCloud’s data.

However, there would need to be a redistribution of royalties within the independent community globally, as artists licensed through the majors and Merlin are not subject to the change.

According to a statement, fan-powered royalties are a new model of payouts that are driven directly by an artist’s fanbase. With this move, each listener’s subscription or advertising revenue is distributed among the artists that they listen to, rather than their plays being pooled. The change benefits rising independent artists with loyal fans.

Even as a piecemeal approach, it’s a bold step by SoundCloud’s new CEO Michael Weissman.

“Many in the industry have wanted this for years,” he said. “We are excited to be the ones to bring this to market to better support independent artists. SoundCloud is uniquely positioned to offer this transformative new model due to the powerful connection between artists and fans that takes place on our platform.

“As the only direct-to-consumer music streaming platform and next generation artist services company, the launch of fan-powered royalties represents a significant move in SoundCloud’s strategic direction to elevate, grow and create new opportunities directly with independent artists.”

The nearly 100,000 independent artists monetising directly on SoundCloud through SoundCloud Premier, Repost by SoundCloud or Repost Select will benefit from fan-powered royalties beginning on April 1, 2021.

The rollout of fan-powered royalties is backed by an extensive artist education campaign and direct, ongoing outreach with the independent artist community and industry partners. A micro site has been launched to explain the system for artists.