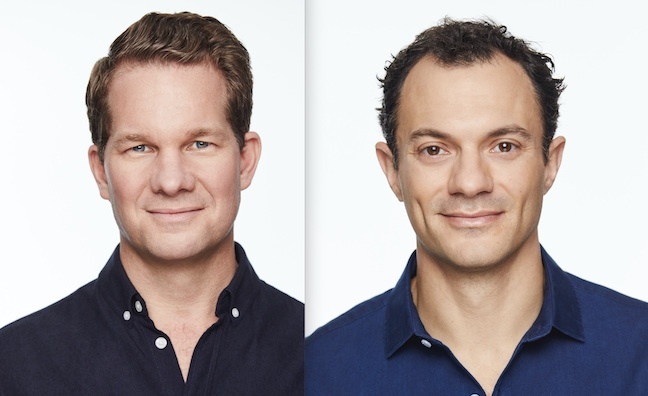 He will take over from current CEO and longtime colleague Kerry Trainor (pictured, left, alongside Weissman), effective January 1, 2021. Trainor will remain a member of the board of directors.

“I’m honoured to lead SoundCloud’s next chapter,” said Michael Weissman. "The company is in one of its most exciting moments in its history, and I’m thrilled to work alongside SoundCloud's team and board to lean into our unique position and opportunity in music. Kerry and I have worked together for nearly a decade, and I want to thank him for his vision and leadership to reposition SoundCloud for growth and, personally, for his partnership, friendship, and support for me to take the helm.”

Weissman joined the company as COO and was promoted to president in 2019. He has been behind key strategic initiatives including its music licensing efforts, its US ad sales partnership with Pandora and the acquisition and integration of artist services company Repost Network.

Kerry Trainor said: “When I first organised the group to invest in SoundCloud in 2017, the mission was to ensure the future of one of the world’s iconic cultural platforms – for creators, listeners, the team and investors alike. There is only one SoundCloud in this world, which we owe to the vision of our founders, Alex and Eric.

“Leading this platform and incredible global team through these transformational years has been an immense privilege. It is a great joy to name – and confirm with the SoundCloud board – my partner and friend, Mike Weissman, as my successor. I look forward to continuing to work with Mike and the team as a member of the board.”

Since SoundCloud’s 2017 investment, the company refocused on its core creator-driven discovery network alongside a sustainable financial performance. As well as its first profitable quarter, the company will complete its third consecutive year of accelerating revenue growth.

SoundCloud continues to build what it bills as the world’s largest open audio platform with over 250 million tracks, 12 million creators heard every month, and over 80,000 artists now monetising their music directly with SoundCloud. It is the No.2 music app on iOS in the US.

“It's been over 13 years since we founded SoundCloud and Kerry and Mike’s leadership has been transformative in many ways,” said Alexander Ljung, SoundCloud founder and chairman of the board of directors. “SoundCloud has always been one of the world’s most important cultural platforms, but the last three years have shown that it is also a fantastic business. I am excited to watch Mike lead SoundCloud’s next chapter and I am thrilled Kerry will remain engaged as a member of our board.”

“SoundCloud is a unique, essential music platform for new and developing artists, and since Raine and Temasek’s 2017 reinvestment backing Kerry and Mike, they put that differentiation front and centre – with results that speak for themselves,” said Fred Davis, partner, The Raine Group, and a member of the SoundCloud board of directors. “Kerry’s leadership has positioned SoundCloud for years of growth to come, and we all look forward with excitement as Mike steps up to drive the company’s next stage. Congratulations, Mike, and thank you, Kerry, as we continue our partnership to build the future of SoundCloud.”

“SoundCloud’s vital role in music discovery and exceptional tools for audio creators stand out in the digital audio space,” added Scott Greenstein, president and chief content officer of SiriusXM, and a member of the SoundCloud board of directors. “As investors, we thank Kerry for his leadership and for SoundCloud’s partnership with SiriusXM, and congratulate Mike as he takes on the role of CEO for SoundCloud’s next chapter of growth.”

The full memo to staff from Trainor is below.

As we drive into our next phase of growth and a new year, I have made the decision to pass the reins to Mike Weissman, our President, to succeed me as SoundCloud’s next CEO starting January 1, 2021. I’ll remain part of the SoundCloud team, continuing as a member of our Board of Directors.

This was a difficult decision because I wear my passion for SoundCloud, our team and our place in music culture on every one of my navy blue sleeves, if not written on my forehead. There is only one SoundCloud in this world, which we owe to the vision of our Founders, Alex and Eric. And leading this platform and incredible global team through these transformational years has been an immense privilege.

It is also deeply rewarding--professionally and personally--to know the time is right for me and the company to take this step.

When I first organized the group to invest in SoundCloud in 2017, the mission was to ensure the future of one of the world’s iconic cultural platforms--for creators, listeners, the team and investors alike. With the end of 2020 in view, we will have achieved our third consecutive year of accelerating revenue growth and our first profitable quarter, with substantial cash reserves to continue building SoundCloud.

Alongside our business performance, we’ve continued to grow the world’s largest open audio platform, now with over 250 million tracks, 12 million creators heard every month, and over 80,000 artists monetizing their work directly with SoundCloud.

While there is always much more work to be done, together we achieved what so many doubted--we safeguarded SoundCloud’s future and cultural mission to empower people to connect through music.

Now in my fourth year as CEO, these milestones have focused me on setting SoundCloud up beyond my watch, for years of growth to come.

It is a great joy to name--and confirm with the board--my partner and friend, Mike Weissman, as my successor. Mike and I began working together nearly nine years ago. At SoundCloud, we architected the process to fund the company and joined as a team. He has led some of our key growth initiatives and I look forward to where he will lead the company in our next phase. We will be announcing Mike’s appointment in a press release later today, so please join me in congratulating him!

As of January, I look forward to continuing to support the Executive Team and you all from the Board, while also taking time for life as a (still) new parent before looking at any new full-time projects.

Before we gather in a bit, most importantly, I want to thank all of you for your work to keep SoundCloud always moving forward. In or out of offices, across countries and timezones, let's keep showing the world that what's next in music is first on SoundCloud.