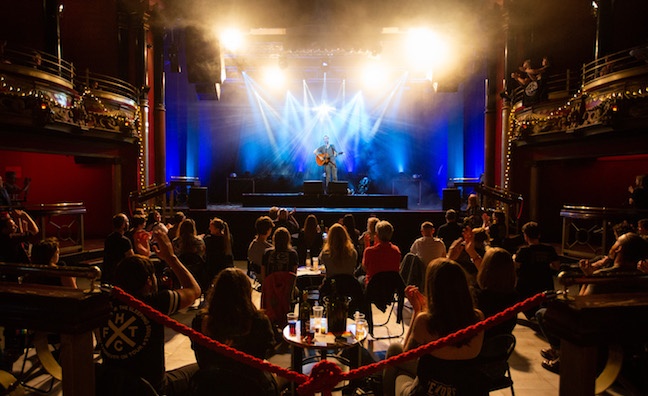 Clapham Grand manager Ally Wolf has told Music Week he is pressing ahead with plans to host reduced capacity concerts.

The Music Venue Trust warned that only around 100 of the country's 900 small music venues will be able to operate under the current restrictions after the government gave permission for indoor live music performances to resume with social distancing. But Wolf is confident The Grand is among the minority able to successfully operate in the immediate future and has started taking bookings for September onwards.

"No one is going to be able to tour on any level for at least six months," said Wolf. "Even after that I don't know if it's going to be back to where it was, so I feel like people need to get their heads around doing stuff that's a bit different. And if it means that you can bring people back to work, people can come out and enjoy shows, and acts can play, then surely that's better than everyone being sat at home?  I would be a fool not to try and actually make this work, otherwise I might as well just be burning 50 grand a month without having a venue."

The Grand, which has already confirmed a series of comedy shows, successfully staged a DCMS-approved pilot show with Frank Turner last month to help inform final guidance for venues in the run up to the delayed August 15 restart date for indoor gigs. The concert, which also featured Beans On Toast and Ciara Haidar, was held before a crowd of 200 - less than 20% of the venue's 1,250-capacity.

"I don't want to be a hippie about it, but it was a beautiful thing and that message got lost in translation in the press because obviously the focus was on the finance," said Wolf. "But the Clapham Grand is an incredibly versatile space, I can sell 200 table tickets for a show and make it work for live music, comedy, drag, movies... Multiple event formats fit in the venue because of the nature of its design.

"It's really important for the venue to be able to bring the industry onside because I want to bring concerts back. Otherwise I might just burn half a million pounds and come back in Easter, by which point there will be no venue to come back to and everything will have dropped off a cliff."

Wolf has also applied for an Arts Council grant to refurbish The Grand's upper circle, which would enable him to up the capacity by 100.

"There's not a one-size-fits-all solution here, but I've certainly got the capability to deliver an incredibly safe experience for customers who have been starved of something they're dying to watch again, and give acts the platform to play live again in a really good venue that actually feels like a show," he said.

"So let's get something going, let's get some acts in and try and bring some agents on board. Let's try and work with some promoters and bring people's heads around to an 'in between' stage of live music that doesn't have to be shrouded in the financial doom and gloom of the bigger picture because, ultimately, all the customers want is a night out."

He conceded that it would require compromises on all sides to make his plan a reality.

"Obviously, there needs to be a reality check in fees," he said. "You're going to have to have conversations with agents and managers and go, 'You've really got two choices: let's create a fair payment scheme, or don't do a show'."

Wolf could not speak highly enough of Turner's contribution to the course. The singer/songwriter previously headlined the Save The Grand livestream at Clapham Grand in June, raising upwards of £22,000 for the 120-year-old building.

"I'm lucky that he's a mate of mine," explained Wolf. "I just sent him an email and said, 'I hate asking favours of friends but this is the situation'. And he was like, Ally mate, I'll do it'. And then as soon as I got the go ahead for the government pilot I got on the phone to Frank.

"Frank Turner took a gamble on doing this piloted live show and it was phenomenal. I think the reason why the media concentrated on the finances is because they looked at it and went, 'You've got a Wembley Arena-selling act, playing for free to 200 people. That's why this won't work'. Whereas the reality is, to sell 200 tickets, you don't need a Wembley Arena-selling act.