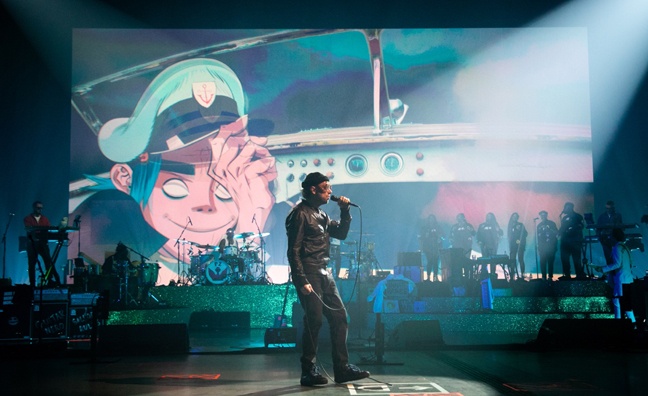 According to a spokesperson, over one million viewers in more than 120 countries tuned in across the three different livestreams, which featuring a pioneering mix of animation and live performance.

Damon Albarn and his 14-piece band played completely live from London for each of the three events to different timezones around the world. Special guests in the room included Leee John, Georgia, Peter Hook, Kano, Slowthai, Slaves, Robert Smith, Matt Berry and Sweetie Irie, while the likes of Beck, Fatoumata Diawara, Elton John, Jpegmafia, Schoolboy Q and 6lack joined via a stunning mix of blended animation and augmented reality effects.

The livestream, hosted by LiveNow, follows other hugely successful events from the likes of Kylie Minogue, Niall Horan, Louis Tomlinson and Music Week 2020 Artist Of The Year, Dua Lipa. It is the latest innovation in the Gorillaz Song Machine campaign, which saw the band pioneer the release of monthly 'episodes', comprising new music, animation and additional content.

“With live shows stopped, Gorillaz doing nothing was not an option,” said Niamh Byrne of Eleven Mgmt, managers of Gorillaz and producers of Song Machine Live. “Tough as it might be, we had to adapt. Nothing will replace a live show played to a great audience, but it was important to provide a platform for the artist to connect. So we embraced the limitations of what was possible and pushed to reimagine the concept of a livestream. In doing so, we realised there are no borders and everyone can watch as long as they’re connected. It’s truly inclusive and so, it won’t go away, it just opens up new possibilities.”

“We always thought and hoped Gorillaz would deliver something special and innovative, that would maximise the virtual setting of their three live shows and excite their fans,” said Marc Watson, director at LiveNow. “The layering on of animations, holograms and special guests, set against mesmerising moving images, powerful performances and the talents of everyone involved to bring to life the basement of Kong Studios. This show was truly pioneering, giving us a glimpse of what the future holds for virtual, livestreamed shows.”

LiveNow sold a variety of ticket packages for the event, including a Virtual Party Pack that included 4 livestream tickets and digital merchandise, and the Round The World ticket that gave access to all three performances.

“We are looking forward to more ground-breaking events like this, partnering with bands who want to deliver something extraordinary to their fans around the world, bringing their community together when, for whatever reason, they can’t be there in person,” added Watson.

Gorillaz are scheduled to return to more conventional live performances in 2021, including a show at the O2 in London on August 11. In the meantime, the final London livestream remains available to view on demand.