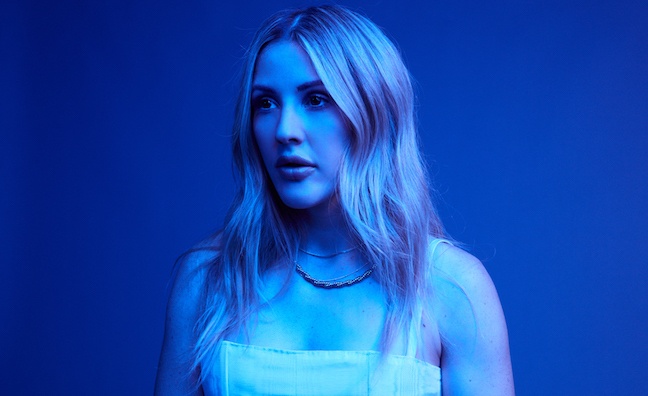 Ellie Goulding and her team have given an insight into her upcoming livestream event The Brightest Blue Experience in a new interview with Music Week.

The singer, who stars on the cover of this week's magazine, has said she feels "optimistic" about the ticketed one-night-only performance presented by LiveNow, which will be livestreamed from London’s V&A Museum on Wednesday, August 26.

“First of all, it’s at the V&A, which is so incredibly beautiful and that in itself makes it unique," she said. "It is going to be unusual because of having no audience, obviously, but I’ve got to a place where I have a great team of people creatively and for the first time I feel like my vision has been able to be realised a bit more."

Brightest Blue became Goulding's third No.1 LP upon its release via Polydor in July and has sold 20,914 copies to date.

"With [previous album] Delirium, it was very much about dancers, crazy lights, glitter and big poptastic performances, but Brightest Blue has given everybody such a vision of hope, natural elements and etherealness," said Goulding. "I love creating an escape, I think we all need that right now."

The event will see Goulding perform a set from her new album for the first time, as well as some of her biggest hits accompanied by live musicians. Ticket packages are priced from £13.50 to £100.

"It’s never the same without an audience, it just isn’t, but I did a show for Vevo at Ally Pally and managed to get lost in it, which was quite an achievement," laughed Goulding. "But I won’t take for granted the connection with fans, people who sing along to every word and are genuinely moved by what you’re doing. I don’t want people to forget the unique and powerful experience you have when you watch one of your favourite artists live.”

The star's manager Ed Millett of Tap Music explained: “This isn’t a show without an audience, it’s a fully unique, creative idea that will celebrate this album, Ellie as an artist and also her brilliant catalogue. Creatively, it will focus not just on the album and some of her biggest songs, but also on what inspires her as an artist and a person.”

Goulding's agent James Whitting of Paradigm added: "With the new album release, it’s important we utilise what is available to us in terms of promo and live performances. We would all like to be in a room with an audience, but current circumstances are not allowing that so we are having to look at alternatives whilst giving something unique to the fans.”

LiveNow is part of the Aser Ventures group – a network of sports, media and entertainment companies that includes Leeds United, international sports broadcaster Eleven Sports and the social publisher Whistle. The link-up with Goulding marks its first foray into live music PPVs since launching last year.

LiveNow director Marc Watson said: “In terms of the performance itself, we’re working with Ellie’s team to deliver a really special virtual show. We are sorry fans can’t watch the show in person and we understand the pressure on people right now due to Covid, so we are going to bring a unique entertainment experience that fans can enjoy from the safety of their home, alone or with friends. The production will be fitting of Ellie’s global following and reputation as a brilliant live performer. We think her fans are going to love it.

"Ellie has a huge, dedicated fan base around the world and there’s a big appetite from fans to see her perform even at a time when they can’t be with her in the flesh. She’s an ideal partner to really establish our offering in the music world."

"We have agreed a series of shows with Ellie already and we are in conversation with a number of additional artists," he said. "Of course during Covid-19 the focus is on delivering really special fully virtual shows. We’ll continue to do dedicated virtual shows and in the future, when fans can return,  we will plan to stream shows for fans who can’t be there in person. This will be good for fans, good for the environment if it reduces travel, and good for artists."