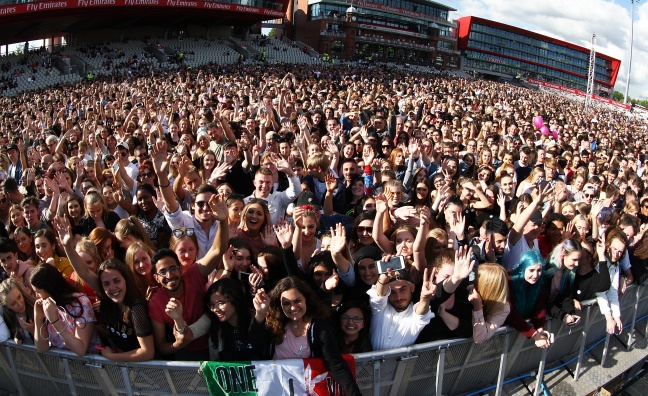 Promoted by Live Nation's Festival Republic business, in association with Manchester-based SJM Concerts, the June 4 event, headlined by Ariana Grande, was staged at just over a week's notice, in honour of the victims of the Manchester attack.

The 50,000-capacity cricket ground - home to Lancashire County Cricket Club - was up for consideration to hold the event, but had to first overcome the hurdle of its next-door neighbours, Manchester United, welcoming 70,000 fans for Michael Carrick’s testimonial on the same day.

“We’d never had a United fixture and a concert [on the same day], you just wouldn’t do it,” said Emirates Old Trafford operations director Anthony Mundy. “The transport system around here is good, but we can’t cope with 120,000 people. We were planning on opening our doors at 4pm, so we’d have 50,000 people coming in to the area and 70,000 going out, literally onto the same street and transport network.

“I know they were looking at the Etihad as an option as well. Robbie [Williams] was in there on the Saturday and the discussion was around whether they could use the same infrastructure for the Sunday gig, but I think that was just proving too difficult.”

A compromise was eventually reached whereby the testimonial kick-off time was brought forward by 90 minutes to 2.30pm.

The venue had welcomed Courteeners just eight days earlier. "The horrific attack at the arena happened on the Monday [May 22] and we were hosting Courteeners on the Saturday of that week," explained Mundy. "Everything changed overnight, as you can imagine, in terms of the security operation. We had lots of meetings with the police and upped all our stewarding and police operations to a level we'd never seen before because of the attack. Then, on the Friday before the Courteeners, I had a call from the promoter, saying, What availability have you got next weekend for a benefit concert?

"The actual planning [for One Love Manchester] was probably only five days because it was on and off," added Mundy. "We had two events in that period - with Courteeners [on May 27] and then the One Love Manchester gig. It took five days to plan what would normally take us five months so, when you look at that as the backdrop, we did pretty well!"

The show was briefly thrown into doubt hours before it was due to start as news circulated of the horrific events in London Bridge the previous evening. "There was an emergency Cobra meeting on Sunday morning and if there had been any specific threat to the Man Utd fixture or our concert, it would have then been cancelled on the day. So even literally up to 11am on the day of the show there was a potential that it could've still been in doubt.

"Luckily, it wasn't and our plans didn't need to change again. The feedback we got from police was the plans were robust and we were good to go. We carried out the operation without any particular hitches. Everything that we planned, and had gone through, worked."

Emirates Old Trafford had previously held concerts by the likes of David Bowie, Bon Jovi, Oasis, Muse, Bruce Springsteen and R.E.M, and has returned to welcoming music events in the past couple of years in the wake of a £60 million redevelopment over the last decade.

"We had Beyoncé and Rihanna here last year, and the year before we had Foo Fighters," said Mundy. "We hadn't had [any music shows] for a few years before then because of the redevelopment. but [concerts] have always formed part of our business mix and that is exactly how we're going to continue. It is part of our model, we're a conference and events venue, we're a cricket club, we host international cricket fixtures and then we host concerts.

"The luxury we've got in many ways is that because the cricket season is played at a slightly different time to football, the Etihad and ourselves really don't clash that much. They can do shows in a certain window and we can do them in a certain window, so it works really well and - in many ways - ours is more of a festival field than a stadium bowl field."