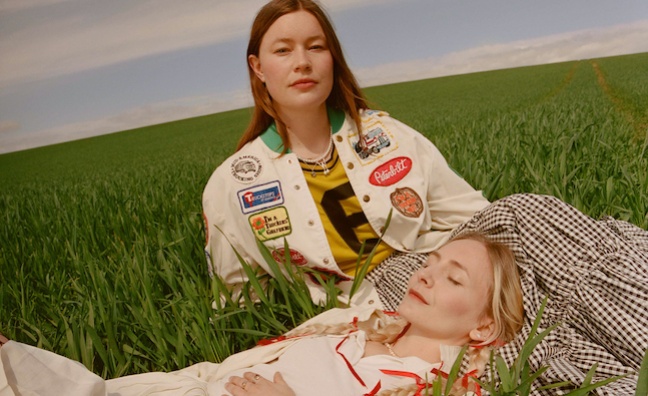 Wet Leg’s agent Adele Slater has predicted that the chart-topping duo will become regular festival headliners in the future.

Last week, Wet Leg stormed to No.1 in the albums chart, as their self-titled debut album sold 28,972 copies in its first week, becoming the biggest selling debut since Olivia Rodrigo’s Sour.

And the breakdown of its final sales figure was impressive. The black vinyl edition sold 3,537 copies, the translucent yellow version sold 4,600 and the clear vinyl edition with bonus seven inch sold 4,735. Its overall vinyl sales figure was 12,872, the highest total for a debut album in its first week for more than 30 years. Across other formats, Wet Leg sold 9,846 CDs, 928 cassettes, 2,295 digital downloads and achieved 3,031 sales-equivalent streams.

The Domino-signed band are currently touring the UK, and Paradigm agent Slater spoke to Music Week alongside the band’s Rhian Teasdale and Hester Chambers and their team for our feature earlier this year.

Slater was sent the video to Wet Leg’s breakthrough single Chaise Longue (62,265 sales, according to the Official Charts Company) in the summer of 2020 and began working with the band shortly afterwards. Last summer, with the pandemic restricting live opportunities, they made their festival debut at Latitude, after a warm-up on the Isle Of Wight.

“The single was out there and had started to do the work, and by the time Latitude Festival came around it was their second ever show - no pressure!” said Slater. “There was massive anticipation and in some ways not being able to do shows prior to this only helped build up hype and expectation, there was a massive queue outside the tent and people were jumping the fences to get in.”

Slater said the show brought the realisation that Wet Leg were connecting: “The best part was they showed they are not just a one-song band, and actually every song is a hit.”

During the week their album was released, Wet Leg played a run of in-store and out-store shows at record shops up and down the UK, before kicking off their current run at Newcastle University over the weekend. Their festival dates this summer include sets at TRNSMT and Isle Of Wight Festival, while their November UK & Ireland tour includes two nights at the O2 Kentish Town Forum in London.

Here, Slater expands further on Wet Leg’s touring plans and explains how, with restrictions now lifting, they intend to make up for lost time on stage.

Wet Leg were ambassadors for Independent Venue Week this year, how important is it that bands champion grassroots venues?
“We definitely wanted to show support to the smaller independent venues, they are the backbone of the live music scene and are really important to the development of local talent. We have been fortunate enough to have had a lot of support opportunities last year – Inhaler actually bought the band a chaise longue and presented it to them on stage in Manchester – so we have been playing a lot of bigger venues, but the shows for IVW were ones to remember.”

They have the songs, the ability and personalities to be here for the long term

What are your ambitions for 2022 in terms of Wet Leg’s live imprint?
“Their diary for this year is pretty hectic and we are conscious to keep building everywhere across the globe. They are already doing great business in the US and selling out up to 2,000 capacity venues, their current headline UK tour sold out straight away and the European tour in May is also sold out. Then they are in Australia in July, before festivals in the US, Europe and more and headline touring in the Autumn. For 2023, [we’re looking at] Asia and South America. They will definitely be racking up the air miles!”

How big can they go? Do you see them as future festival headliners?
“Of course, they have the songs, the ability and personalities to be here for the long term and it’s about time we had some fresh and exciting talent up there on the top line billings.”