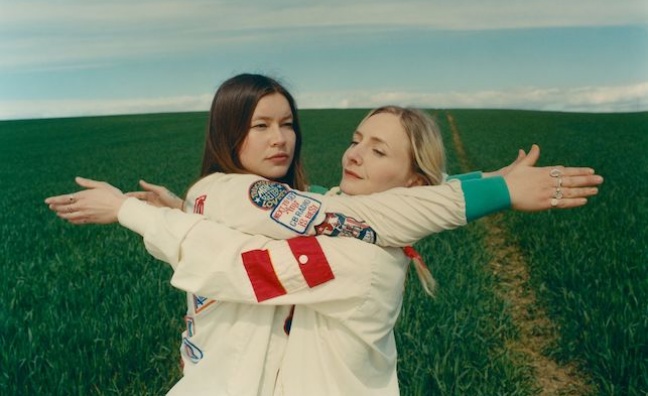 As the BPI issues new data about the independent sector, Wet Leg are the latest indie act to make a significant chart impact.

The Domino-signed duo are on course for No.1 this week with their self-titled debut, which is already on 23,000 sales (Official Charts Company) thanks to a strong physical contribution.

The album is distributed by PIAS, who played a key role in many indie successes of the past year.

“The PIAS services team at Integral partner with Domino to provide a comprehensive set-up at retail for the physical release of the debut album by Wet Leg,” PIAS MD Jason Rackham told Music Week. “The week one chart and volume is very impressive and it is great to see Domino breaking yet another new artist. The Integral sales team have been working closely with Domino to ensure that we could help deliver the best possible week one result for this brilliant debut album.”

Based on Midweek sales, PIAS is also chasing No.2 with Father John Misty’s Chloe And The Next 20th Century (Bella Union). Jason Rackham described him as a “wonderful” artist.

PIAS partners with Bella Union to deliver the international campaign (outside of America where Father John Misty releases on Subpop). He launched the album with headline performances at the BBC 6 Music Festival and the Barbican in London.

“Support for the new album in the press, at DSPs and at record stores has been superb and Radio 2 came on board with playlist support heading into this album,” said Rackham. “Josh’s [Tillman] fifth studio album as Father Misty sitting at No.2 on the midweek album chart is testament to Bella Union’s long-term investment and support in their artists.”

Jack White’s Third Man label (in partnership with The Orchard and Proper Music) is also a strong chart contender this week with his album Fear Of The Dawn. EarMusic is aiming for a Top 10 finish with Joe Satriani’s The Elephants Of Mars.

The latest chart success for indies coincides with new analysis from the BPI, which shows that in 2021 independently released music enjoyed its fourth consecutive year of growth.

The collective share of music consumption in the UK attributable to independent labels – including Dirty Hit, Partisan and PIAS – rose to stand at 26.9% in 2021. This was up from 25.9% in 2020 and is markedly higher than the 22.1% figure registered in 2017.

“2021 was an exciting year for PIAS and the independent sector,” said Rackham. “Here at PIAS we helped to deliver the breakthrough campaign for Transgressive’s Arlo Parks, with success both in the UK where Arlo won the Mercury Prize as well as a BRIT Award [Breakthrough], and over in the States where Arlo was nominated for two Grammys and has performed on every major US TV show.

“2021 also saw multiple albums of the year releases from the likes of AJ Tracey, Black Country, New Road, Dry Cleaning, Idles, Bicep and Mogwai, all of which were released in partnership with PIAS. This diversity of music springing up from the independent sector will continue to drive success through 2022 and we will have the additional impetus provided by international touring and festivals returning.”

The BPI confirmed that the positive trend is continuing in 2022, with the indie share of the UK market overall now up to 28.9% for the year to date, boosted by No.1 albums from The Wombats, Don Broco, Stereophonics and rapper Central Cee.

The BPI insights are based on Official Charts Company data and are taken from All About the Music 2022 – the 43rd edition of the BPI Yearbook, which is published today.

The strong performance reflects a successful year for indie artists, with 60 independent albums charting in the Top 10 (compared with 52 in 2020). That includes No.1 albums from Wolf Alice, Mogwai, KSI and Noel Gallagher’s High Flying Birds. Artists including Central Cee, AJ Tracey and KSI (again) each racked up hundreds of millions of streams in the UK alone.

Little Simz’s LP Sometimes I Might Be Introvert rewarded the UK rapper with her commercial breakthrough, while both KSI and Wolf Alice scored maiden No.1 LPs. Little Simz also won the BRITs Breakthrough award this year.

Independently-released albums are also part of the catalogue boom thanks to streaming and vinyl. Arctic Monkeys’ 2013 release AM (Domino) was the biggest-selling indie album of 2021, while Adele’s 21 and 25 (XL) both appeared in the overall best sellers of the year. PIAS is distribution partner for all three catalogue titles.

Arctic Monkeys rank highly in terms of listeners on streaming services (including 25.3m on Spotify) and their singles Do I Wanna Know? and Why’d You Only Call Me When You’re High? (both from AM) collectively amassed more than 80 million plays in 2021, according to Official Charts Company data. AM is also in continuous demand on LP and was placed in the Top-20 of the year-end Official Vinyl Chart 2021.

The biggest new independent release was KSI’s second album All Over The Place, which was a No.1 in July and had sold 98,787 by the end of the year. Each of the Top 10 independent albums sold over 60,000 copies in 2021, and all six newly-released albums made the weekly Top 5, with three going to No.1.

With the blockbuster indie LP release from Wet Leg and upcoming albums from AJ Tracey and Fontaines DC, the growing momentum looks set to continue.

Geoff Taylor, chief executive BPI, BRIT Awards & Mercury Prize, said: “The UK has an enviable independent music scene, and enhances choice and variety to new and existing British talent. This continued growth demonstrates that indie labels and artists are thriving in the age of music streaming, and are particularly succeeding in the vinyl revival. We’re delighted to see the indie sector going from strength to strength, contributing to the growth of the UK music industry as a whole.”