'The Wombats are a band at the peak of their powers': How the trio's fanbase helped them hit No.1 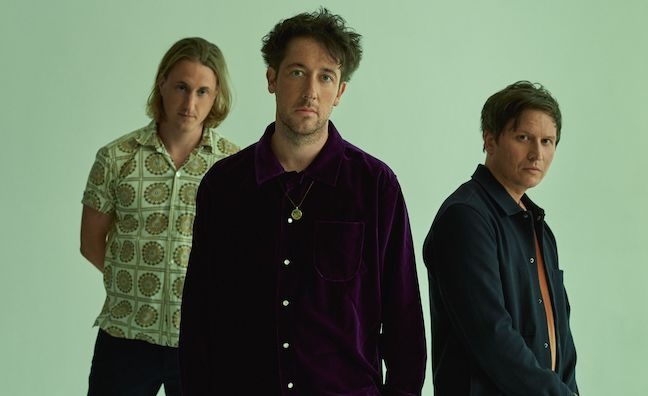 It’s getting on for 15 years since The Wombats released their debut album, and closer to 20 years since the band formed after meeting at Liverpool Institute For Performing Arts.

But a loyal fanbase has now delivered The Wombats - singer, guitarist and songwriter Matthew Murphy, drummer Dan Haggis and bassist Tord Overland Knudsen - their first ever No.1 album.

With their fifth album, Fix Yourself, Not The World, The Wombats held off a challenge from Ed Sheeran to debut at the summit with sales of 13,812, according to the Official Charts Company. The first week sales included 12,065 physical copies (4,984 of them vinyl LPs, along with 5,997 CDs and 1,084 cassettes), and it is No.1 on all physical formats.

It marked another successful album campaign for AWAL, who recently secured a commercial breakthrough for Little Simz and powered Gerry Cinnamon to the summit. It was also the first No.1 for distributor Proper Music since it was acquired by Swiss fintech company Utopia.

The Wombats have also made their mark on streaming platforms (5.3 million monthly Spotify listeners) along with viral moments on TikTok. Fix Yourself, Not The World registered 1,391 chart sales from streams in its first week.

The opening sales for Fix Yourself, Not The World have improved upon the performance of their last album, 2018’s Beautiful People Will Ruin Your Life (11,265 week one sales).

As revealed in Music Week’s charts analysis, The Wombats’ new LP has the largest first week sales since their second album, This Modern Glitch, which sold 23,357 copies when it landed at No.3 in 2011 (well before the market shift to streaming consumption).

The Wombats have hit No.1 and increased sales since their last album - how did you achieve that result?

“There weren’t one or two main key drivers, just a lot of targeted gains which add up to a larger win. The team created a detailed and nuanced plan but most importantly it was multilayered. We weren’t just focusing on one key element this week and then one key element the next week, we did loads of things, all at the same time, with different objectives and to serve different goals. Some worked, some didn’t, but we adapted and refined as we went. Having a band who were really open to giving everything a go was essential in making that kind of strategy work, as you need to move fast and not get bogged down in procrastination.

“The conversation that band had with their audience through their own channels was also really impactful, and we armed the super fans to further drive the buzz to great effect. We asked those fans what they wanted and that feedback proved to be an important tool to this campaign. Our content and visual narrative was consistent and recognisable, which gave us a good framework for a lot of the marketing activations. Importantly, the band delivered a fantastic record and the key singles all resonated really well with their fans and beyond.

“The traditional media story played a part too. We had some of the biggest radio airplay moments of their career during this campaign and hit a wide audience across a broad range of stations. Our press results were meaningful too, both from a mainstream and more targeted perspective. There is a collective narrative and feeling around the campaign that The Wombats are a band at the peak of their powers, who have bucked the trend of their peers to be arguably more relevant now than they ever have been, and that has really driven positive sentiment around the record. The whole campaign has been about fun and positivity too, and I really think people needed that.”

The week one physical sales were strong, how did you maximise results across all formats?

“Through a lot of separate initiatives and working closely with the sales team at Proper Music and Townsend Music, who run the band's D2C store. Mina Ingebretsen, who was the lead project manager at AWAL for the album campaign, devised some really engaging product ideas which really drove physical sales as collectibles, must-have items without cannibalising the album's streaming numbers. The band worked incredibly hard doing outside and in-store performances in the week leading up to the album release as well.”

The Wombats have made an impact on streaming platforms - how have they cut through, unlike many other guitar-based acts?

“A key reason is the band’s audience demographic. They have a really large, fast-growing segment of their fanbase who are Gen Z and late millennials. They are streaming first, digital natives who have discovered and now engage with the entire Wombats catalogue through streaming. So consequently, the album's marketing messaging was primarily streaming-first throughout. The team were mindful to further engage fans on streaming platforms via the use of new features, whether it be moving visual artwork, music video engagement tools or curated playlists so the band feel in tune with the streaming audience.

“We’ve had great cross-partner support too in terms of editorial and larger marketing partnerships, thanks to the considered approach of our global partnerships team and how they have engaged our DSP partners. The services see the depth of on-platform engagement the Wombats listeners have and how well their music reacts across a range of programming. The fact they write instant, impactful, and memorable pop songs with broad appeal doesn’t hurt either.”

The whole campaign has been about fun and positivity

The members are scattered around the world, how did AWAL get involved in the A&R process?

“There were early sessions with the band together, but as Covid hit, the three of them had to finish the record from separate locations. Murph in LA bouncing ideas around with some great writers, alongside online sessions with Tord and Dan. The A&R team dipped in throughout the process with feedback and helped pull the body of work together, but by now as you can imagine, the band have a solid process at this stage of their career. It was great to work with [publisher] Kobalt over the past two albums and that close connection is key.”

How has TikTok helped them reach a new audience on this campaign?

“In the month prior to the album campaign launch, a remix of the band’s 2015 track Greek Tragedy started trending on TikTok and was used by some of the platform's biggest creators. Alongside our agency Be-Hookd, the team used the buzz to set up a band profile, which quickly grew to 100,000-plus followers. The band came up with a clever introduction video and kept up regular posting around the sound, and users started to connect the dots. It was a great start and we've kept the profile active throughout the whole campaign with a lot of engaging and unexpected content, and making sure we utilised the latest trending hashtags and effects.

“Lisa Young In, who led our audience development strategy, pushed the band to communicate directly with their fans and have them bring in their own ideas and the guys started to embrace the platform, which had the knock-on effect of positively affecting the engagement rate. We had one eye on conversation too, and ran various initiatives to move these new fans into deeper engagement with the band across other channels and platforms.”

How significant is the O2 date and UK arena run in April - how will the album campaign reignite around that touring activity?

“It’s really important and gives us a framework to wrap the next phase of the campaign around. There will be a host of new content and more music around the tour dates and we’ll be running lots of marketing to drive back to the new record. Having a band playing the biggest shows of their career right after a new album has landed is a dream scenario. They are an amazing live act.”

The Wombats are embarking on a US tour - what are the North American and global opportunities for the band at this point?

“The band have an established international fanbase and we focused on growing that during this campaign. In key territories such as France, Germany, Netherlands, both traditional radio campaigns and media partnerships have been really successful. Bethany Hamblin, who ran the international marketing at AWAL, devised some amazing tailored digital initiatives, including social ‘fan packs’ in local languages and hyper-localised CRM mailer campaigns. That kind of detail is really important. We saw great media and DSP support across Latin America too, particularly in Mexico and Brazil, driving solid streaming growth.

“US and Canada are also a focus and have a successful radio campaign at alternative radio running in the US with If You Ever Leave, I’m Going With You. The band are about to kick off their US tour, and alongside that they will be engaging with local fans via retail in-store events similar to those we had such success with in the UK. They’ll continue to work international markets through the first half of this year with Latin American festival dates in March, and a headline European tour in May.”